May Boeve, Executive Director of 350.org, which spearheaded the fight against the Keystone pipeline, heralded the move as "conclusive proof that activism works. After four years of rallies, marches, sit-ins, and civil disobedience, we’re thrilled to see President Obama take an important first step by vetoing this love letter to Big Oil." A coalition of environmental groups is holding a celebration outside of the White House in Lafayette Park. 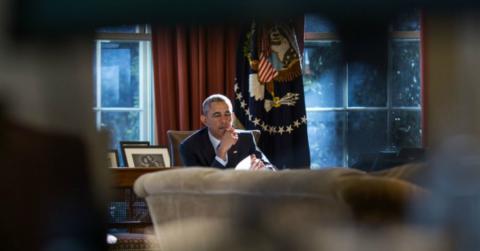 Though celebratory, groups warn that a veto does not mean the end of the Keystone XL pipeline.,Official White House Photo by Pete Souza
Following years of fierce environmental campaigning by a grassroots movement against the monied fossil fuel industry, President Barack Obama on Tuesday vetoed a Congressional bill approving the Keystone XL tar sands pipeline.

Only the third veto by this president, many hope that the action marks the end of a six-year approval process for an $8 billion pipeline project that would carry synthetic crude oil and diluted bitumen from the Athabasca tar sands mines in Alberta, Canada and connect to the completed portion of the pipeline in Steele City, Nebraska, which then would carry the oil to Gulf Coast refineries.

Though White House spokesman Josh Earnest said the president's rejection would occur without "a lot of drama or fanfare," reaction was immediately jubilant as many saw the move as a huge win for the climate movement.

May Boeve, Executive Director of 350.org, which spearheaded the fight against the Keystone pipeline, heralded the move as "conclusive proof that activism works."

A coalition of environmental groups is holding a celebration outside of the White House in Lafayette Park.

Organized by 350.org, Indigenous Environmental Network, Natural Resources Defense Council, Energy Action Coalition, Sierra Club, Greenpeace, and Friends of the Earth, the rally is to let the President know that, while the veto is "a strong step in the right direction," that he must reject the pipeline "once and for all."

AP reports that the executive veto will put "a freeze on a top GOP priority—at least for now."

And as Bill Snape, Senior Counsel for the Center for Biological Diversity, explained to Common Dreams, the veto does not necessarily stop the pipeline. "Hopefully the president will reject the project," Snape said.

As Snape notes, Tuesday's veto is simply a rebuff of what Obama deems Congressional overreach. The Keystone pipeline still awaits a permit by the Secretary of State while the administration says that it will continue to weigh the so-called merits of the project. Obama has said he will not approve a project that significantly increases U.S. emissions of carbon dioxide.

Noting that other recent actions by the president have been less climate-friendly, Snape added: "And double hopefully, the president will reject harmful offshore oil drilling and public lands fracking as well. But we have a lot more work to do there."

In a statement, Greenpeace U.S. Executive Director Annie Leonard echoed the idea that other climate fights await. "The State Department needs to put the final nail in the coffin of Keystone XL, so we can focus on the real opportunity ahead: building America’s new, clean energy economy," Leonard said.

Despite the much-anticipated rejection, Republican leaders vowed their continued support for the legislation, which was ushered through both chambers of the GOP-led Congress earlier this year.

"The allure of appeasing environmental extremists may be too powerful for the president to ignore," Senate Majority Leader Mitch McConnell (R-Ky.) and Speaker John Boehner (R-Ohio) wrote in an op-ed published Tuesday. "But the president is sadly mistaken if he thinks vetoing this bill will end this fight. Far from it."

Ahead of the veto, more than a hundred artists, actors, First Nations leaders, environmentalists and other leaders—including Willie Nelson, Naomi Klein, Van Jones, Laura Poitras, Thom Yorke, Norman Lear, Rebecca Solnit and James Hansen, among others—sent a letter to the president urging his full rejection of the pipeline.

The unity letter, circulated by 350.org, says that a few key points have emerged in the years-long campaign.

First, the letter states, "most of those who care about this project oppose it, and with an intensity matched by few issues in recent time." Citing the Tribal Nations and farmers who were the first to resist the project because of its threat to their beloved land, the letter says that the passionate opposition "spread over time to climate scientists, college students, moms, financial experts, many trade unionists, renewable energy proponents, nurses, artists and an ever-growing swath of the general population."

The second point, the group notes, is that more and more studies have shown that tar sands pose an undeniable threat to the ever-warming planet. "There is no way to reconcile this pipeline with a serious climate policy," the letter states.

"Rejecting the Keystone XL pipeline will powerfully demonstrate your commitment to stopping the rising of the oceans, set the stage for further climate action and build a legacy worth sharing."

Last, all of the arguments for the pipeline—jobs, energy independence, inevitability—have been clearly refuted, showing the true colors of the project as a "classic boondoggle, whose only beneficiaries will be a handful of rich oil companies while our families take on all the risk."

The group concludes saying they fully support the president's veto, predicting that it is an action sure to shape Obama's climate legacy.

"Many of the choices that define a presidency come by accident or chance," they write. "But this one is firmly in your control. Climate change will be a defining issue of this century. Rejecting the Keystone XL pipeline will powerfully demonstrate your commitment to stopping the rising of the oceans, set the stage for further climate action and build a legacy worth sharing."