The Canadian oil company is feeling the heat as Indigenous groups, environmental organizations, and other activists are demanding that the President pull the plug.

May 17, 2021 Tina Gerhardt The Progressive
Printer friendly
A Call for Biden: Stop Enbridge Line 3 Published May 17, 2021 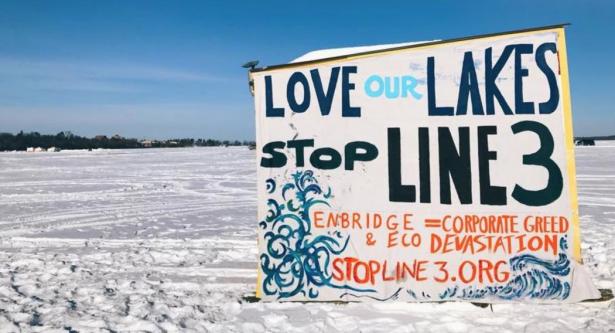 Photo via Creative Commons // The Progressive,

The Biden Administration has taken numerous steps to shift from fossil fuels to renewable energy. On his first day in office, he canceled the Keystone XL pipeline. A federal court has declared the Dakota Access Pipeline (DAPL) is operating without the necessary permits. Tribes and environmentalists are calling for him to shut down DAPL.

Share this article on
“Line 3’s most serious immediate impacts will be on Indigenous peoples and their lands and waters along the line.”

Meanwhile, opposition to the Enbridge Line 3 continues in Minnesota and Wisconsin. Currently, the 1,097-mile-long Enbridge Line 3 pipeline carries tar sands crude oil from Edmonton, Alberta, through Minnesota, to the town of Superior in northern Wisconsin.

On Friday, May 7, a coalition of organizations across the United States will “organize actions and protests at the branches, offices, and headquarters of the banks funding Line 3.” In order from highest to lowest, the top five financers in the United States include: Citibank, Wells Fargo, Bank of America, J.P. Morgan, and Truist.

In 2014, Enbridge, a Canadian-based oil company, announced plans to replace the existing 282 miles of the pipeline with 330 miles of a new pipeline. The original line had been operating since 1968 and, according to the Minnesota Department of Commerce’s Final Environmental Impact Statement, is “corroded and cracked.” The new pipeline runs along a different route.

While Enbridge frames the pipeline simply as a replacement, its new route has led many to call it an entirely new pipeline.

The proposed new route cuts across several tribal territories, including those of the Anishinaabe (Ojibwe, Chippewa). It would also run across 200 bodies of water and 800 wetlands. These waters and the nearby lands are vital for fishing and the gathering of wild rice.

In December 2020, the Red Lake Nation and the White Earth Nation filed a federal lawsuit to stop the pipeline. It was denied in February 2021.

The Mille Lacs Band of Ojibwe, the Red Lake Nation, and the White Earth Nation, along with Honor the Earth and the Sierra Club, have also sued Minnesota for its Public Utilities Commission’s approval of the permits.

In a 1837 treaty, the Ojibwe ceded the lands to the United States, so long as “the privilege of hunting, fishing, and gathering the wild rice, upon the lands, the rivers, and the lakes included in the territory ceded, is guaranteed to the Indians.”

The Great Lakes constitute one-fifth of the world’s fresh water. On its website, Honor the Earth states not only that “our wild rice beds, lakes, and rivers are precious” but also that “our regional fisheries generate $7.2 billion annually and supports 49,000 jobs.”

Winona LaDuke (Ojibwe), executive director and co-founder of Honor the Earth, tells The Progressive, “Honor the Earth opposes the Line 3 tar sands oil project because, like Minnesota’s own Department of Commerce, it believes that the line is unnecessary and is not economically or environmentally viable, especially now as the tar sands industry collapses. Line 3’s most serious immediate impacts will be on Indigenous peoples and their lands and waters along the line.”

On June 3, 2019, the Minnesota Court of Appeals stated that it “found the revised Final Environmental Impact Statement inadequate because it did not address the potential impact of an oil spill into the Lake Superior watershed.”

The Enbridge terminal in Superior, Wisconsin, is a crucial node. From here, according to the Minnesota Public Utilities Commission, the crude oil would head to refineries in the Gulf Coast, the Midwest, and Eastern Canada.

Line 3 is not the only Enbridge pipeline facing pressure.

Enbridge Line 5, built in 1953, carries oil 645 miles from Superior,  on through northern Michigan and across the Straits of Mackinac through Michigan to Sarnia, Ontario. From Sarnia, it continues across Canada to Montreal, Quebec. A recent article on Enbridge Line 5 in The Washington Post calls the pipeline “a key conduit for refineries in those regions, which make gas, propane, and home-heating oils, as well as jet fuels for airports in Toronto and Detroit.”

In Michigan last fall, The Washington Post article continues, Governor Gretchen Whitmer revoked “the 1953 easement that allows the pipeline to cross the straits, citing the ‘unreasonable risk’ that they pose to the Great Lakes and what she said were Enbridge’s ‘persistent’ breaches of the easement’s terms.”

So Enbridge is currently feeling the heat at various points along its pipelines.

According to the recent article in The Washington Post, when former Michigan governor and current United States Secretary of Energy Jennifer Granholm was asked about Enbridge Line 3, she said: “If we’re going to do pipes, let’s do pipes that build the infrastructure of America in a way that is future-looking” and continued “and not rely upon fuels or transport fuels—even though our neighbors to the North want it—that are not going to contribute to reducing greenhouse gas emissions.”

Added to the protests is the reduced cost of renewable energy and the Biden administration’s support for it. Last week, Bill McKibben reported that “renewable energy is suddenly startlingly cheap.”

In Minnesota, protests organized by Indigenous people have continued unabated. On March 8, more than 350 cosigners representing local, state, national, and international organizations sent a letter to President Joe Biden, “urging him to stop construction of the pipeline in Minnesota by suspending or revoking its federal permits.” The signatories included, among many others, the Giniw Collective and Honor the Earth.

On April 1, a day after Biden unveiled his new infrastructure plan and on the day Enbridge began a two-month break in construction, Indigenous youth rallied in Washington, D.C., demanding the Enbridge Lines 3 and 5, the Dakota Access Pipeline, and the Mountain Valley Pipeline all be stopped. During Earth Week, on April 24, 2021, a solidarity protest organized by Madison Area Democratic Socialists of America (DSA) took place in Madison, Wisconsin.

Winona LaDuke tells The Progressive, “the increasing climate threats to Minnesota—and the planet—will be exponentially exacerbated by this pipeline. In short, Line 3 is a climate time bomb. Tar sands is the dirtiest and most expensive oil on the planet to extract, and the equivalent of fifty coal-fired power plants. It also flies in the face of everything Governor Walz and his agencies have said about improving relations with tribal communities and protecting against climate change. Stop Line 3.”