As part of a clear national strategy, an array of anti-choice legislation is being rolled out in state houses around the country, putting women's health at risk. Already, 57 percent of American women of reproductive age live in states that are considered 'hostile' or 'extremely hostile' to abortion rights. That percentage could go up if recent proposals are enacted into law, and U.S. women’s constitutional rights may well differ depending on where they live. 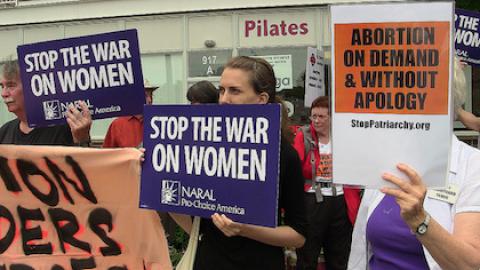 “Anti-abortion lawmakers are effectively creating a patchwork of laws that ensures U.S. women’s constitutional rights differ depending on where they live.", Mikasi

An array of anti-choice legislation is being rolled out in state houses around the country, putting women's health at risk and illustrating how Republican gains in the 2014 elections have exacerbated the fight over reproductive rights.

Already, 57 percent of American women of reproductive age live in states that are considered 'hostile' or 'extremely hostile' to abortion rights, according to the Guttmacher Institute, which studies sexual and reproductive health and rights around the world.

That percentage could go up if recent proposals are enacted into law.

In Ohio, for example, lawmakers this week introduced a bill that would ban abortions once a fetal heartbeat can be detected—as early as six weeks into a woman's pregnancy.

In Arkansas on Tuesday, the state Senate approved legislation that would require a physician to be in the room during a chemical abortion and bans telemedicine abortion—a procedure already unavailable in Arkansas.

Two identical bills, SF 800 and HF 607, would bar Medicaid and other public health programs in the state from covering abortion services—policies that would have an outsized impact on low-income women.

... Two other bills, SF 794 and HF 606, also identical, would require free-standing reproductive health facilities that perform ten or more abortions each month to be licensed in the same way as outpatient surgical centers, and would allow the state to inspect those facilities with no notice.

... A fifth bill, HF 734, would require a prescribing physician be physically present when abortion drugs are administered.

Of such restrictions, Janet Reitman wrote for Rolling Stone earlier this year: "While cutting insurance coverage of abortion in disparate states might seem to be a separate issue from the larger assault on reproductive rights, it is in fact part of a highly coordinated and so far chillingly successful nationwide campaign, often funded by the same people who fund the Tea Party, to make it harder and harder for women to terminate unwanted pregnancies, and also to limit their access to many forms of contraception."

In South Dakota, a conservative lawmaker is pushing graphically worded legislation targeting dilation and evacuation (D and E) procedures, which may be used in a second-trimester abortion. On Tuesday, the state’s Health and Human Services committee voted 11 to 2 along party lines to approve the bill; now it awaits debate and vote by the full South Dakota house, in which Republicans hold a wide majority.

"If D and E were to be banned, women would have only labor induction or hysterotomy (a mini-cesarean section) as options for second-trimester abortions," David Grimes, former chief of the Abortion Surveillance Branch at the Centers for Disease Control and Prevention, and Carole Joffe, professor at the Bixby Center for Global Reproductive Health at the University of California, San Francisco, wrote in an op-ed published Thursday. "These archaic methods were largely abandoned decades ago in the United States."

The specifics of abortion methods can be unpleasant to the lay public. However, this is true of most operations that remove tissue from the body. Surgeons choose operations based on what is safest and most appropriate for the patient, not on what is pleasant for the surgeon. The same professional standard applies to abortion.

Even if it is an effective strategy for anti-choice activists, considering these methods separately from the women who need abortion care is wrong. D and E abortion should not become a political football. D and E abortion is not a problem, any more than a mastectomy is a problem. Both are solutions to a problem.

It's not just Republicans who are to blame for the latest wave of attacks on women's rights.

In the West Virginia state House, a bipartisan majority, including a majority of Democrats, passed a bill Wednesday that would ban abortions after 20 weeks of pregnancy—similar to extreme legislation withdrawn by Republicans in the U.S. House earlier this year. A similar bill was approved by the majority-Republican state House in South Carolina on the very same day.

And in a separate piece for RH Reality Check, Liss-Schultz notes that as of last week, "Maryland is the latest state dominated by Democratic majorities to see a 20-week abortion ban proposed this year."

To be sure, such a coordinated assault on reproductive health was expected when Republicans cemented their 'supermajority' in state legislatures during the 2014 midterm elections.

"[B]race yourself for 2015," Molly Redden wrote at Mother Jones in December 2014. "Next year, Republicans will control 11 more legislative chambers than they did in 2014. Lawmakers in Texas and North Dakota are back in session, and there are no major elections to take up lawmakers' time or cause them worry about war-on-women attacks."

The anti-choice approach could be even more convoluted than it appears on the surface, ThinkProgress health editor Tara Culp-Ressler wrote on Thursday.

In several states, such as Arkansas, lawmakers are introducing, debating, and passing anti-abortion laws that have little practical impact on the residents there, Culp-Ressler pointed out.

"There's...a clear political strategy at play here," she declared. "As an increasing number of states pass the same type of restriction on abortion, the anti-choice community is able to declare that the policy is gaining momentum. More laws on the books represent an important symbolic victory. And, within the context of that goal, ineffective laws are actually some of the best tools available. They’re less likely to be overturned because they’re harder to challenge in court."

She added: "Anti-abortion lawmakers are effectively creating a patchwork of laws that ensures U.S. women’s constitutional rights differ depending on where they live."