Bryan Stevenson: If It's Not Right to Rape a Rapist, How Can It Be OK to Kill a Killer?

One of the challenges we face is that people talk about the death penalty as if it’s a choice between the death penalty and no punishment. In a 21st-century society we have so many ways to incapacitate people who are a legitimate threat to public safety and impose punishments that are serious and substantial, that express community outrage without executing people. 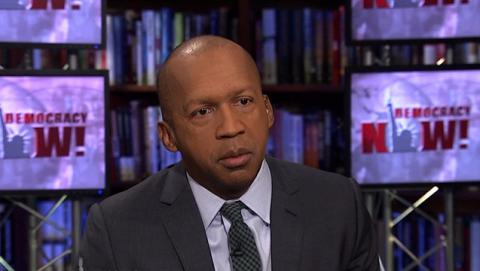 Byan Stevenson is the Director of the Equal Justice Initiative and author of Just Mercy , Democracy Now!

On a visit to Australia, the acclaimed US lawyer says ‘there is no natural way to systematically engage in killing another human being’ – which is why state executions dehumanise all involved.

Brigid Delaney: In your book Just Mercy you write about a death penalty case where your client Herbert Richardson was executed. You were with him in his last hours. One of the most interesting things was how you observed a sense of shame and discomfort among the prison staff involved in the execution. Tell us about that experience.

Bryan Stevenson: It was the first time I had got involved with someone who was executed, and we got involved very late. After fighting and running and rushing and pushing so hard to get a stay [of execution], they denied the stay motion and I was intimate with these people who were attempting to carry out the execution. It was surreal. But it was surreal for them too. There is no natural way to systematically engage in killing another human being who is not a threat to you, who doesn’t have to be killed, but is killed to express what kind of people we are and what our society wants.

This guard who I write about hadn’t thought about what it was going to be like to get the family members of this condemned man to basically walk away from him so he could be strapped in the electric chair. The intensity of the emotions of the family members – he had just been married and his wife grabbed him and would not let him go – sobbing and the intensity of that, was completely unnerving to these corrections guards who were being ordered by other people who were far enough away not to hear the sobbing – the pain of trying to pull these people away.

It was impactful for me to witness that. I was standing with this [condemned] man and he was saying, “Bryan it’s been such a strange day – all day long people, the guards have been saying, ‘What can I do to help you? Can I get you something? Can I get you a coffee? Do you need the telephone? How can I help you?’”

More people said, “What can I do to help you?” in the last 14 hours of his life than the last 19 years of his life when he really needed it – when he returned from Vietnam drug addicted and traumatised – where were they? When he was struggling with drugs and alcohol – where were they? Seeing people moving around this man in his last hours, shaving the hair off his body so he would be a more efficient conduit for electricity that would kill him and watching these people try to do that – it was so clear that everyone there knew what was happening was wrong.

Are you a lawyer, a campaigner or both?

We have recognised to be effective we have to change the atmosphere outside of court as much as in court. I think we are very sensitive to narrative and if we don’t create a narrative that says mass incarceration is wrong, that not protecting people with disabilities is wrong, not protecting minors is wrong - I think we’d be compromised if we didn’t do this. I see it as all part of one continuum. We have now banned the execution of people with disabilities, the execution of children. That wasn’t the case before for most of my career. Even children until 2005 were subject to the death penalty in the United States.

I know. The countries that execute children are among the who’s who of the worst in the world with human rights abuses – and you had the United States in there. But that’s an instance where our individual advocacy in certain cases led to a change in the narrative, that said it is incompatible with being a first world society if you are going to execute people for crimes they committed as children.

A survey by the Lowy Institute released yesterday reported around 38% of Australians were in favour of executions. Executions are not part of our justice system – so why do people support them?

In Europe there is comparable poll data but I think this support is largely theoretical. When you apply it in certain cases or you get close to the lives that are going to be disrupted by it, I think that support changes. But we’ve been in an era where the politics of fear and anger have really narrowed our thinking when it comes to punishment. Politicians all over the world have sought political power by posturing being tough on crime. People talk about recovery, rehabilitation and restitution as much as they talk about retribution. That orientation has an impact on the population when they are afraid and angry – and it’s extremely tempting to be harsh and punitive. Support for the death penalty really comes from that place.

One of the challenges we face is that people talk about the death penalty as if it’s a choice between the death penalty and no punishment. In a 21st-century society we have so many ways to incapacitate people who are a legitimate threat to public safety and impose punishments that are serious and substantial, that express community outrage without executing people. A lot of support for the death penalty comes from a place of great distance from the true details of killing another human being.

If you ask people, how many of you support raping people who rape, you would find it very hard to find anyone that would support that.

Yeah – who would put up their hand to rape the rapist?

There seem to be rituals or theatre around executions. I am thinking of what awaits Myuran Sukumaran and Andrew Chan, two Australians on death row who could very soon face the firing squad in Indonesia.

Transport to a remote island is being arranged. They will get a 72-hour notice period, there will be a knock on their cell doors in the middle of the night, they are given the choice to sit, kneel or stand before their executioners, there will be a “conscience round” of bullets [one set is live, one is blank]. All these rituals seem more political than practical.

The protocols around these things say a lot about the society. It may sound like it expresses ultimate resistance to drug trafficking but like all acts of violence, no one gets to act violently and walk away.

The firing squad – they go out of their way that not all the guns have real bullets, so that the marksmen can walk away thinking, I didn’t do it. But there’s still this dead body on the ground. If we feel the need to actually protect the moral misgivings of the people participating, then there is no greater evidence of what we are doing is wrong.

Many people involved in executions soon after leave corrections and there is growing evidence that this is a brutal and dehumanising thing to be involved in. It’s disruptive to your basic sense of wellbeing and peace.

I look at the Bali guys and the legal team – they are fighting to the end. They just lodged another challenge. What are your thoughts about the fight right to the end versus at some point accepting the sentence?

My obligation is to fight for my client. And I do like fighting. And for some clients, if you think the execution is inevitable and you stop fighting, it makes the execution even more unbearable. Being able to hope even until the last minute that your life might be spared is important somehow.

Most human beings are not used to living without hope. Even if that hope is dwindling – it becomes important to maintain some hope, for the most advanced cancer, for the most sober prognosis there are still those miracles, those people who defy the odds. And knowledge of those people is really comforting. We [lawyers] try to fight in a way that doesn’t require the attention and time of the client. That’s what a good advocate is there for. They will carry the fight right up until the last minute. You still have the time and the space to try to prepare yourself for what may be the inevitable execution.

Most of the time clients will want you to do whatever you can to save them. It’s also important to say to the rest of the society, this should not be happening rather than submitting to a punishment that is fundamentally unjust, fundamentally inhumane. To the system we say: we will fight, we are not going to make this easy for you. I don’t have much interest in co-operating with a system that executes people.

As well as the logistical, financial and intellectual energy required to take on a capital case, what is the emotional experience like for lawyers whose clients are facing death?

You are going to be pulled in, connected and intimate with things that create pain and anguish and frustration and it will also mean that you will have wonderful moments where you will experience the rare type of joy and the rare type of pain that few experience in work.

You have to just accept that if you do things you care deeply about there is going to be an emotional engagement that is at times overwhelming and challenging and painful – but it will be balanced by the fulfilment that comes with not just living by the ideas in your mind but also the conviction in your heart. And for me that is the great privilege doing what I do. I have never complained about going to work or wished that there is some other type of job for me.

What have you learned from your clients?

I have never had a death row client that at some point hasn’t expressed concern for my wellbeing. That’s incredible to me.

Does proximity to death bring out finer traits?

Proximity to anything will give you nuances and insight that you can’t get at a distance. My proximity to these men and women on death row show me parts of their humanity and parts of their character, their redemptive potential. Each time I’ve been proximate to someone about to face death it renews even more my commitment to ending the death penalty. The ugliness of it just becomes clearer every time – in a way that you can’t ignore.

So compassion is like muscle – the more you flex it, the stronger it becomes?

No question. The more attentive you are for every human being’s capacity to make mistakes, the more tolerant you are and the more thoughtful you are against measuring your judgments against people who have hurt you.

In a lot of ways we get comfortable with harsh condemnation when we can make the person we are condemning something completely different, not really human. Which is why this phenomenon [in Indonesia] of executing foreign nationals is so problematic. It’s so easy to reduce “the other” to something else that is not us, that we can kill or mistreat.

But we all need compassion. We all need mercy at some point.

Brigid Delaney is Guardian Australia’s features editor. She is also the co-founder of the Mercy Campaign.