The idea of 11th-century Scotland as a foreign land for the invading English army created powerful political possibilities in the dramatist’s mind ... with reference to Afghanistan and Iraq (and, perhaps, now Libya) ... seeing the play’s events from the perspectives of both the invaders (who, of course, consider themselves liberators) and the occupied population carries some rather profound implications for the politics of the modern world. 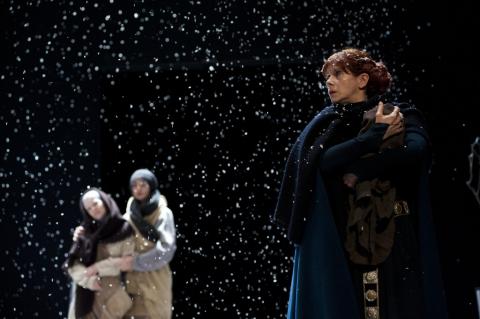 David Greig's "Dunsinane" is a play playing three different games at once. The first game is that the play is a kinda-sorta sequel to Shakespeare's "Macbeth." The second game is that it is kinda-sorta a parable for the US and UK's nation-building misadventures in Iraq and Afghanistan. The third game is that "Dunsinane" is most definitely a look inward at the Scottish national character. A ballad for a conquered nation, it trains a sharp critical eye at the motivations of the conquerors and an even sharper one at its own-oftentimes bloody-refusal to be conquered. I can imagine many a production of this play that would not be able to win all three games at once. But the National Theatre of Scotland, in partnership with the Royal Shakespeare Company, delivers one that sweeps the board; and thanks to Chicago Shakespeare Theater's World's Stage program it's doing so at Navy Pier this month.

Just like with the war in Iraq, the forces of the English commander Siward (Darrell D'Silva) have been led into Scotland under false pretenses, only here the "faulty intelligence" are the same events depicted in Shakespeare's play. Macbeth, who goes unnamed here, was maybe not a tyrant; and his wife, Gruach (Siobhan Redmond) is very not dead, and she also has a son. Oops. This potential challenge to the reign of the Joffrey Baratheon-esque Malcolm (Ewan Donald) creates a distinctly Scottish, boggy quagmire for Siward. Meanwhile, letters from a young soldier (Tom Gill) home to his mother track the slow disintegration of the English occupation. And it's not hard to see why. Redmond's alluring, unflinching Gruach is a worthy match for Shakespeare's Lady M. Against the gruff naivete of D'Silva's Siward, it's not even close.

Director Roxana Silbert conjures a world for "Dunsinane" that is stone and mud and peat and crag and driven inexorably toward tragedy. A swelling Gaelic post-rock score, played live, and a late, enveloping snowfall effect are all wonderful theatrical touches so common for the National Theatre of Scotland but so rare everywhere else. This may be a history play, but is a history still living, still dangerous, and still not close to being done.

Dunsinane
by David Greig
directed by Roxana Silbert
from the National Theatre of Scotland
and Royal Shakespeare Company
An Interview with the Playwright
by Mark Brown of Herald Scotland
Chicago Shakespeare Theater
February 2015
https://www.chicagoshakes.com/plays_and_events/dunsinane/dunsinaneplaywright

David Greig is arguably Scottish theatre’s most prolific and eclectic writer. Scan his CV, and you’ll find such diverse works as The Architect (an Ibsenesque image of modern Scotland), When The Bulbul Stopped Singing (an affecting portrait of contemporary Palestine) and Yellow Moon (a teenage road movie for the stage).

It is little surprise, then, that when I begin setting up an interview with him ahead of the Scottish opening of his “Macbeth sequel” Dunsinane, I find that he is in New York working on the libretto for the forthcoming West End/Broadway musical of Roald Dahl’s Charlie And The Chocolate Factory. When it comes to a capacity to shift between writing styles, Greig has long been in possession of the authorial golden ticket.

Speaking on the phone from his New York apartment, Greig’s first comment on Dunsinane defies any idea that, having taken on Broadway, he might have “gone native”. Far from having embraced all things popular culture, Greig is still driven—in some of his writing, at least—by his admiration for the great English dramatist Howard Barker.

“If there’s a play of mine that is most plainly an expression of my Howard Barker obsession, which goes back to my time at university, it is Dunsinane,” he says of the drama, which is produced by the Royal Shakespeare Company in association with the National Theatre of Scotland, and premiered at the Hampstead Theatre in London in February of last year.

“It’s a response play; I’m responding to Shakespeare’s Macbeth in a way which is not dissimilar from Barker responding to Thomas Middleton in his version of Women Beware Women. It also has a fair number of Barker rip-off speeches in it.”

In the world of the play, the tyrant Macbeth is dead, and the English aristocrat Siward (Darrell D'Silva) arrives in the battle-ruined castle of Dunsinane to find that the queen, Gruach (Siobhan Redmond), has survived the fighting. As he first imagined this scenario, Greig found that it overflowed with contemporary resonances.

“My starting point was a political question. I’d been watching a lot of productions of Macbeth in the UK five or six years ago, and I suddenly thought, ‘What happens after the dictator falls?’ Macbeth is a play about the toppling of a dictator; we would see in it a mirror of Ceausescu or Gaddafi, with Lady Macbeth as the manipulating figure, the power behind the throne. However, as we’re living in an Afghanistan/Iraq world, I thought the really interesting question was about what happens after you topple a dictator … I love watching Macbeth and I almost wanted the play to carry on, to see what part two would look like.”

In “part two”, Greig reverses the idea of Macbeth as “the Scottish play”. Instead, the playwright explains, Dunsinane “is a play about English people … it’s about an English garrison trying to survive in hostile territory.”

The idea of 11th-century Scotland as a foreign land for the invading English army created powerful political possibilities in the dramatist’s mind. With reference to Afghanistan and Iraq (and, perhaps, now Libya), he says, “we’re familiar with the idea of a people who are a bewildering ‘other’ to the invader. It interested me for those people to be Scottish. I could write for a Scottish audience who would be able to see the world from both points of view as the play progresses.”

Seeing the play’s events from the perspectives of both the invaders (who, of course, consider themselves liberators) and the occupied population carries some rather profound implications for the politics of the modern world. “We think,” observes Greig, “‘Why do those people in Afghanistan shoot our lovely soldiers who are trying to help them?’ I think one of the reasons that [the National Theatre of Scotland’s play] Black Watch has been so successful is that, to a certain degree, it allowed left-wing people to express some of their residual fondness or love for the put-upon British squaddie, who we can’t otherwise celebrate.

“We think, ‘Who are these bastards who want to blow up our boys?’ It’s impossible to imagine, unless you can really force yourself to make the imaginative leap of thinking, ‘How would I feel if, walking around my village, were Muslim, Afghan soldiers, who were extremely powerful and unbelievably well-armed and in tanks. How would I feel about that?’ Without any question of who’s the government or what, I just don’t think you would like it.”

For Greig, this isn’t a matter of the invader—be it Siward’s English forces in his play, or the British Army in modern-day Afghanistan—necessarily being in the wrong. In fact, the playwright professes himself to be “very fond” of the Englishman who overthrows Macbeth. “I hope people are quite sympathetic to Siward. I think he genuinely is a good man who is trying to do the right thing. It’s just that every single action he takes in pursuit of the right thing leads to more and more bloodshed.” The problem of Siward’s occupation of Scotland is, Greig agrees, very much a reflection of Mahatma Ghandi’s timeless warning that “there is no people on Earth who would not prefer their own bad government to the good government of an alien power”.

If Dunsinane is inspired by modern politics, it is, to a large degree, driven by the character of Lady M. “You just can’t lose Lady Macbeth, she’s just so great,” exclaims the playwright. “I wanted to see her from another point of view. I was helped by the historical record, which says that she outlived her husband, and may have done so by some distance. So, that allowed me to have her in the play; although, frankly, I would have done it anyway.

“The thing with Gruach is that she emerged very suddenly with a single line,” he continues. “I was writing fragments of the play, and I got to this moment, after the castle has fallen, and we’re in the midst of the ruins and the fighting and the bloodshed, and Siward finds this woman hiding. He says to her, ‘Woman, what is your place here?’; and she says, ‘My place? My place here is queen.’ That was such a cool line! She just emerged from that.”

The Gruach who emerges was almost bound, says Greig, to be played by the outstanding Scottish actress Siobhan Redmond. “It’s very difficult for me to imagine someone other than Siobhan saying that line. How could it not be Siobhan Redmond?” he asks, with a laugh.

Greig’s Lady M was, he explains, developed from a “speculation” that, rather than being the sidekick to the all-powerful king, Queen Gruach was the real power in the land. From the writer’s understanding of history—assisted by his conversations with the leading historian of the period, Fiona Watson—it was Gruach (whose first husband was, in reality, killed by Macbeth) who belonged to the powerful clan. Macbeth was just the muscle employed by her to hold on to the throne.

Such an outlook, he says, changed the whole perspective of his play. “Suddenly, the entire balance of this 17-year rule is different. It’s no longer the big, strong guy and his wee wife; it’s a queen, and she has picked exactly who she needs to make sure that she rules.” For Greig, this creative combination of history and imagination gave the already fascinating character of Shakespeare’s Lady M even greater dramatic possibilities.

“The Gruach I was working with has the weapon of her intellect and the weapon of her sexuality. Too many depictions of Lady Macbeth portray her as a depraved woman, and her sexuality is tied up with a lust for power. I was much more interested in the idea that this is a woman who has a number of very powerful aims, which are rational. She believes that her clan, her faction, should be in charge, and it is her right to be queen. To achieve this she will use all means at her disposal, including her sexuality; there is a scene in which she, in effect, seduces Siward (although that doesn’t turn out as you might think).”

If Lady M appears in Dunsinane in a different guise to that we know from Shakespeare’s play, the language, too, is not Shakespeare’s. “Again, Barker is the key here,” says Greig. “We can’t do Shakespeare’s language in contemporary theatre. The hubris of attempting it would be extraordinary; there’s enough hubris in this play already without attempting to do Shakespeare’s pentameters. So, the only available register that one could latch on to—that seemed natural to me, that felt like I had it in me—was Barker. He’s the model, because he writes this rich rhetoric, this poetic, imagistic language, which is not naturalistic but is contemporary. It’s ahistorical, it’s out of history. It doesn’t jolt you. You can write that language without thinking, ‘People wouldn’t speak that way in the 11th-century.’”

And with that—history, politics, power, sexuality, Barkerian poetics and all—Greig returns to his latest project, putting songs in the mouths of poor little Charlie Bucket and the crazy genius Willy Wonka.