This weekend, thousands of people -- including one-fifth of the U.S. Congress and President Obama -- are commemorating the 50th anniversary of the famous Selma to Montgomery march. The irony is rich: The 1965 Selma march -- and the violent "Bloody Sunday" caused by Alabama troopers -- is credited with speeding passage of the Voting Rights Act, Yet voting rights in the South and the Voting Rights Act itself are in their most precarious position in half a century. 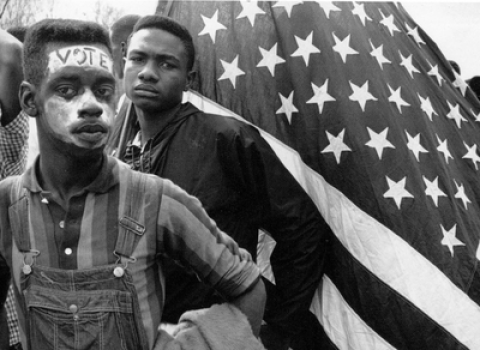 SELMA, Ala. -- This weekend, tens of thousands of people -- including nearly one-fifth of the U.S. Congress and President Obama -- are descending on Alabama to commemorate the 50th anniversary of the famous Selma to Montgomery march.

The irony is rich: The 1965 Selma march -- and the violent "Bloody Sunday" caused by the reaction of Alabama troopers, which horrified the nation -- is credited with speeding passage of the Voting Rights Act, one of the crowning achievements of the civil rights struggle.

But Selma's legacy is being remembered at a moment when voting rights in the South, and the Voting Rights Act itself, are in their most precarious position in half a century -- and there appears to be little political will in Washington to act on measures that would solidify the legal architecture to protect free and fair access to elections.

In 2013, the U.S. Supreme Court delivered what civil rights advocates view as the most devastating blow to the Voting Rights Act in Shelby County v. Holder. In a 5-4 decision, the justices struck down Section 4 of the VRA, which outlined which states and counties would be covered by VRA's critical "preclearance" provision. Under preclearance, states and counties with a documented history of racial voting bias -- mostly in the South -- had to gain approval from the U.S. Department of Justice before making substantial changes to voting access and elections.

The Court declared that the formula for determining which counties had to preclear was "based on 40-year-old facts having no logical relation to the present day" -- which many acknowledged was true. The problem was that the Court put it to Congress to create a new formula to guide what areas would be covered by the VRA preclearance rules -- something Congress has proved unwilling to do, effectively blocking progress on restoring the Act's strength.

States took full advantage of the vacuum created by the demise of VRA preclearance. As the Brennen Center has documented, between 2010 and 2013 -- a period when conservative-leaning legislatures in the South and country moved to pass a host of new voting restrictions -- there were 148 objections filed under the VRA.

After preclearance was struck down, states that had proposed voting restrictions -- including Alabama, Arkansas, Florida, North Carolina, Tennessee, Texas and Virginia -- were able to move forward with dramatic changes to voting and election law.

The sweeping changes affect every step of the voting process. A recent piece in the Texas Monthly, about the efforts of the group Battleground Texas to register African-American and Latino voters, itemizes the obstacles to voter registration under the state's new laws:

For a group like Battleground to register Texans to vote, they themselves must be Texas residents, must be eligible to vote and -- in a wrinkle that is unique to Texas -- must be deputized by each county where they're registering. In some of the state's 254 counties, going through the requisite voter registration training course can be done online; in others, certification is offered only once a month, at the county courthouse during work hours. But as the Battleground team came to learn, the complications only begin once a deputy registrar is certified. If a Dallas County-certified volunteer registers someone who says they live in that county when in fact they live just across the border in Tarrant County, then the deputy registrar has committed a misdemeanor. If the volunteer turns in the completed registration forms more than five days after they've been collected, that's also a misdemeanor.

Once registered, voters now face a variety of other obstacles, including voter ID laws, cuts to early voting days, reduced voting sites, purges of voting lists -- all voting decisions that were often successfully challenged when the VRA's preclearance rules were in place.

There is a Voting Rights Amendment Act of 2015 in Congress, but it's stalled, as many expected it would be. Already facing deep partisan divides on issues like the Affordable Care Act, lawmakers are reluctant to battle over which states should be subjected to special scrutiny under a revived VRA. As election expert Rick Hasen notes, Congress -- which passed renewals of the VRA with large margins before -- seems to have lost the appetite to support pushing for such measures; House Judiciary Committee Chair Rep. Bob Goodlatte (R-Virginia) won't even hold a hearing on the VRA Amendment Act.

In Hasen's view, with Congress and the Supreme Court increasingly unreliable allies, the fight for voting rights can no longer wait on federal bills or higher court decisions. It's now a long game, starting with "political action on the state and local level to fight against restrictive voting rules and for expanded voting opportunities."

But, advocates say, that doesn't let Congress off the hook, especially as lawmakers flock to Selma to show their concern for voting rights. A coalition of civil rights groups released a statement this week declaring that Congress can only truly honor the Selma marchers with action on the Voting Rights Act:

Fifty years ago this week, the Bloody Sunday marchers were brutalized by police for taking a stand, thereby inspiring the nation to adopt the bipartisan Voting Rights Act.

The VRA has become one of the most successful civil rights laws in American history, an indispensable tool for combating voter discrimination into the 21st century, and a fitting tribute to the Selma marchers. But the legacy of those who risked their lives in Selma has been unraveled by the voting discrimination that has emerged even more starkly since the Supreme Court gutted the VRA in 2013.

Members of Congress from both parties are going to Selma to honor the marchers' memory, but many have done nothing to restore the marchers' legacy.

The Bloody Sunday march is not a parade, and it is hypocritical for members to attend the event and then do nothing to advance a VRA restoration when they return to Washington.  We expect every member of Congress marching in Selma this week to work diligently and thoughtfully to pass legislation that fully protects voters from discrimination.