tv Halt and Catch Fire’s Surprising Finale: The Show Was the Opposite of What We Thought

With AMC's Halt and Catch Fire's second season arriving soon, a reflection on the first. Halt and Catch Fire's finale reveals it was anti-capitalist all along. For all the early technical bells and whistles, Halt has a straightforward, pleasing story arc—a ragtag team that against long odds and many obstacles does the near impossible—that toward the season’s end ran into a genuinely thought-provoking hurdle: capitalism. 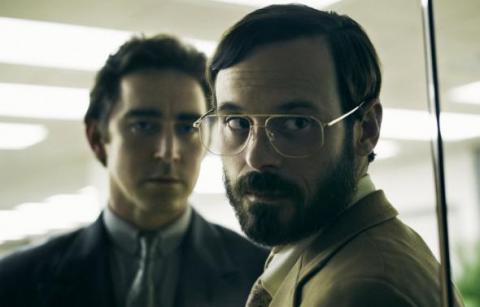 Joe MacMillan (Lee Pace) and Gordon Clark (Scoot McNairy) in Halt and Catch Fire., AMC
AMC’s Halt and Catch Fire, a period drama set in early-’80s Dallas, at the dawn of the personal computer age, got off to a confounding start. Joe MacMillan (Lee Pace), a sales shark with vision, a silver tongue, and pliable morals, tricked the brass at an established company called Cardiff Electric into getting into the personal computer race by illegally copying IBM’s code. That may sound complicated, but it’s the simplified version: I was halfway through the season before I could explain that event so succinctly. For the first handful of episodes, characters would go around talking about the “BIOS” incessantly, while fretting over other alienatingly opaque technical matters and convoluted business dealings. Perhaps the confusing start explains why Halt has only ever attracted about half a million viewers.
But despite its clunky, mystifying beginnings, I stuck with Halt and Catch Fire—maybe because I was interested to see what would happen to its punk hacker heroine Cameron Howe (Mackenzie Davis), whose appeal Molly Lambert has explained nicely over at Grantland. After its season (and maybe series) finale last night, I’m glad that I did. For all the early technical bells and whistles, Halt has a straightforward, pleasing story arc—a ragtag team that against long odds and many obstacles does the near impossible—that toward the season’s end ran into a genuinely thought-provoking hurdle: capitalism.
Joe, confidence man though he may be, has a great eye for talent. The team he assembled includes Some Kind of Wonderful sprite Cameron, a college dropout and software genius who, apparently, predicted the appeal of Siri all the way back in 1983. Joe also tapped hardware specialist Gordon Clark (Scoot McNairy), a settled married man stewing in his own mediocrity, waiting for a chance to make something of his own again. Gordon is married to Donna (Kerry Bishé), who, in the pilot, had the thankless task of standing in the way of his dreams, an extremely misleading introduction to a much more multidimensional character. (In the finale, it’s Donna and Cameron, not Joe and Gordon, who are heading up a cutting edge company.) Like Gordon, Donna has hardware chops. The two are both computer geeks—that’s how they fell in love—but since the failure of their own company, she’s done a better job taking nourishment from their family life. Joe didn’t pick Donna, but she was the fourth essential member of their Bad News Bears, the one person in this quartet of ambitious and impassioned people who was not completely self-involved. (Halt doesn’t soft-pedal the tremendous ego involved in creation, though it does suggest that all those egos are all like snowflakes.)
Over the course of the season, Joe, Gordon, and Cameron, with the help of Donna and Cardiff Electric’s reputation, employees, offices, and money, built the Giant, a portable computer (a featherweight 15 pounds!), that’s fast and cheap and visionary: It talks to you. “What’s your name,” it asks, its cursor blinking, when you boot up.
In the season’s penultimate episode, the bottom fell out at Cardiff—the boss who had come to see the importance of the Giant was arrested for hacking into Cardiff’s own bank accounts to keep the company afloat. Joe, Gordon, Cameron, and Donna decided the only thing to do was to try and sell the Giant anyway, and so they headed out to an all-important tech trade show. The group pulled off a series of coups—they put together a great booth, threw a great party—and seemed about to get everything they had dreamed of, when they were undermined by a competitor who had stolen their ideas and designs, abandoned the talking component, and was ready to sell the resulting faster machine for much less.
Halt seemed like a kind a fantasy about capitalism: An upstart group sees an opportunity and does every crazy thing it can to exploit it. It takes risks, but those risks are based on the right guesses: that people will love their PCs, if only you give them PCs to love. Good ideas may need a slick salesman, visionary software, great hardware, and some lucky breaks, but if you have all those things you will succeed—or so it seems, until a crappier, cheaper machine comes along. The fantasy curdled: Halt is actually about the unreliability of capitalism. Some good ideas arrive too soon. Some good ideas arrive right on time, but in the wrong hands. Some good ideas only seem like good ideas. At the end of the second-to-last episode, pragmatic Gordon, who never really loved Cameron’s ideas anyway, ripped out the talking feature with Joe’s eventual agreement. The cutting-edge Giant never gets a chance to find a market, because the market wants something inferior. The disrupters get disrupted by a bunch of hacks.
I don’t want to put too fine a point on it, but please compare this storyline to that of HBO’s satire Silicon Valley. Like Halt and Catch Fire, at the end of Silicon Valley, a ragtag group of computer geniuses with a great product arrives at a prestigious tech event only to watch as a much bigger company steals their thunder by copying and improving upon their work. Ultimately, however, the geeks of Silicon Valley rally: They improve their product, and genius wins out. At the end of Halt and Catch Fire, improving the product isn’t enough. The system is brutal, unfair, reactionary, and imperfect. In the finale, Gordon and Joe did what they must to sell the Giant, compromised as it is. (Joe had his moment of rebellion by lighting a truckload of Giants afire, but that shouldn’t stop the sale of the rest of them.) It’s Cameron, the consummate video gamer, who knows that when you fail, the only thing to do is start again from the very beginning.