Vermont About to Become a Hellish Place for People to Work in?

Steve Howard, executive director of the VSEA, told NPR recently, “Before you take money out of the paychecks of snowplow drivers, nursing assistants, custodians and administrative assistants … we believe you have a moral obligation to ask for a greater contribution from a broad-based revenue source paid mostly by the wealthiest Vermonters who have had all the economic gains of the last decade.” 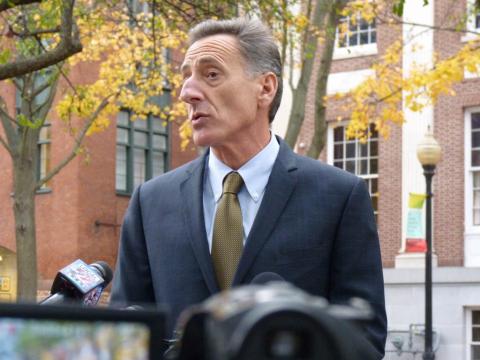 Vermont, a state perceived as a liberal utopia by many, is being hit with a barrage of anti-labor policies. In a recent budget address, Gov. Peter Shumlin called out Vermont State Employees' Association, declaring he expected VSEA to reopen its contracts to ditch pay increases. The governor also announced that he plans to hack away at state jobs by consolidating emergency call centers and closing a school that serves state prisoners. In addition, he said that Vermont parents should “expect better outcomes for our students at lower costs.” He’s called for education cuts and higher student-teacher ratios, moves that will probably result in layoffs. This past fall, he announced he wants to outlaw teacher strikes in the state. That idea might soon become a reality: a bill prohibiting public school teachers from striking was recently introduced by Republican Rep. Kurt Wright and passed the House Education Committee by a vote of 8-3.

Shumlin is a Democrat who has received support from Bernie Sanders and owes much of his success to the working people of Vermont. He was supported by VSEA when he first ran for governor in 2010, after he criticized his Republican predecessor’s proposed layoffs and budget-cutting methods. The union continued to support him during his re-elections in 2012 and 2014. Before the last election, in 2014, Shumlin met with all the unions and assured them that he could be counted on. He insisted that layoffs would be a last resort. He won that election by less than 2,500 votes and, because he received less than 50% of the state's vote, his win had to be approved by the Vermont General Assembly. If Shumlin hadn't obtained support from the unions, there's a very real chance he could have lost.

Shumlin was also greatly assisted by a social democratic third party, the Vermont Progressive Party. When he first ran for governor, the Progressive Party made a conscious decision to sit the contest out if Shumlin agreed to act on some important issues upon election: closing the Vermont Yankee Nuclear Power Plant and supporting single-payer healthcare. Shumlin narrowly edged out Republican Brian Dubie by less than 4,000 votes, which makes it safe to say that the chances of him winning, if a Progressive Party candidate had run, would have been impossible. As Progressive state representative Christopher Pearson told the New York Times in 2014, “Shumlin was very clear on his stance, and it pulled him through a narrow primary — a lot of Progressives were volunteers on that — and then he narrowly won.”

Shumlin kept his promise on shutting down the power plant, and at first, it seemed he would keep it on healthcare, too. In 2011, he signed the Green Mountain Care (Act 48), a plan whichhe said would give Vermont publicly financed healthcare by 2017. Shumlin had initially viewed single-payer as unfeasible, but thanks to an enormous and strategic grassroots effort by Vermont residents, he seemed enthusiastic about creating such a system. By 2010, the state was spending over $5 million on healthcare, but thousands of residents remained uninsured. Organizers had permeated the conservative areas of the state and ended up obtaining support in areas some liberals had given up on. Some studies carried out by organizers placed support for single-payer at over 90 percent.

Shumlin officially bailed on single-payer last December, citing the textbook excuses for denying such a program: he suddenly believed it would raises taxes and hurt small businesses. “This is not the proper time, “ Shumlin claimed. Protesters who felt sold out by the governor’s change of heart mobilized in front of the statehouse, insisting that if Shumlin really wanted to discard the legislation, he would have to repeal it.

Resistance to Shumlin’s move also ignited a debate about whether his plan was ever that progressive to begin with. Shumlin was supposed to work out financing for the plan by 2013, but continued to delay it, then ended up insisting it would cost too much money.

However, it seems clear that the plan he was evaluating wasn’t exactly single-payer. As Margaret Flowers, a pediatrician and single-payer advocate told the Real News Network shortly after Shumlin reversed course, “so many people have called this a single payer. But that wouldn't make sense, because a single-payer system, hands down--we know it. It's been proven at every level that it's the most cost-effective type of health system that you can have.”

Flowers identified the three characteristics of single-payer systems: simplified administration, global operating budgets and bulk purchasing. She pointed out that Shumlin’s plan had none of those: “It was designed to be the closest to a universal health care system and to be, ultimately, a universal health care system for the state of Vermont. But they were not using a single payer. They were having some public insurances, some private insurances, and then a publicly funded kind of Green Mountain Care insurance option for everybody else.”

The reasons Gov. Shumlin turned to such a blueprint presumably have something to do with the advisors who surrounded him while he was determining the financing. Shumlin didn’t turn to single-payer financing experts, but establishment names connected to President Obama’s Affordable Care Act. His top healthcare aide was Anya Rader Wallack, who helped develop the ACA at a national level and worked on Hillary Clinton’s failed attempt at establishing a national healthcare system in the 1990s. Shumlin also relied on Jonathan Gruber, an MIT economics professor who was an important architect of the ACA as well as Mitt Romney’s 2006 Massachusetts healthcare reform.

Vermont Workers’ Center, a grassroots organization that helped spearhead the fight for single-payer in the state, has a much different idea. It's introduced a financing plan, as a bill, into the Vermont House of Representatives. The group calls for a graduated payroll tax combined with progressive tax on earned and unearned income. The financing plan would also remove Shumlin’s cap on what the wealthiest citizens pay-—in 2013 Shumlin threatened to veto a proposal that would have cut taxes for 200,000 middle-class Vermonters and required some of the state’s wealthiest individuals to pay a bit more money. House and Senate leaders withdrew the proposal.

Raising taxes on the rich wouldn’t merely assist in bringing health insurance to Vermont’s workforce, it would also eliminate the need for Shumlin’s inevitable layoffs. As Steve Howard, executive director of the VSEA, told NPR recently, “Before you take money out of the paychecks of snowplow drivers, nursing assistants, custodians and administrative assistants … we believe you have a moral obligation to ask for a greater contribution from a broad-based revenue source paid mostly by the wealthiest Vermonters who have had all the economic gains of the last decade.”

The union has submitted a proposal that involves taxing the wealthy, which it believes could generate around $30 million. That’s precisely the figure Shumlin wants in service cuts.

Shumlin’s quest to ban teacher strikes in Vermont, and the subsequent (recently approved) bill, was supported by the state’s branch of the National Educators Association, which believed that the arbitration it would impose is a process it would have more control over.

“We have long proposed moving to a system where both we and local school boards are subject to binding arbitration in the event contract agreements can't be reached," said Vermont NEA spokesman Darren Allen during the fall of 2014. Allen’s tone has certainly changed, as he recently referred to the Vermont Statehouse bill as, “Perhaps the most anti-union, anti-labor, disrespectful to teachers bill we've seen in Vermont.”

Whether Shumlin is actually betraying his ideals, or is merely a run-of-the-mill politician, is irrelevant to the people of Vermont. The issue is that, despite his lofty rhetoric, his policies and proposals are bad for working people. Nonetheless, because of his party, and the national perception of Vermont as a liberal state, he has received a fraction of the headlines anti-worker GOP politicians have.

Vermonters aren’t having a difficult time making that connection. When I spoke with Kevin Wagner, a Progressive Party state committee member, he didn’t hesitate to use the W-word: “The parallel with Scott Walker is really striking. It's unusual for Shumlin to publicly throw [unions] under the bus like he is now, though attempts to balance the budget on the backs of state workers (combined with resistance to raising taxes on the rich) are unfortunately nothing new...labor and progressives probably don't feel they can do much about it because cuts in social programs are the most likely alternative. A lot of people outside Vermont don't seem to know that neoliberal Democrats ruin things here, too.”