A growing number of German construction and public works companies are using labor subcontractors. They are not genuine construction firms. They look like it on paper, but their only activity is to supply labour at a low cost. They often only pay wages for the first few months. They then stop paying and expect the workers to keep going until the job is finished, in the hopes that they will be paid at the end of the contract. 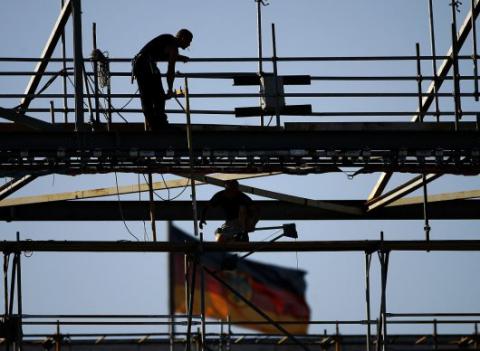 Ever-increasing numbers of migrants are employed on German building sites under the status of posted worker , AP/Markus Schreiber

In autumn 2014, the German capital opened, with great pomp, the “Mall of Berlin”, a giant new shopping centre right in the heart of the city, just a stone’s throw away from the Brandenburg Gate.

A few weeks later, the scandal broke out: around thirty Romanians who had worked on the mall’s construction were still owed several months’ wages. Ovidiu is one of them.

He has been living in Berlin for a number of years. In summer 2014, one of the site managers persuaded him to go and work on the construction of the future shopping mall.

This is far below the hourly minimum wage of €10.75 (US$11.4) applicable in Germany’s building and public works sector. The workers, moreover, were never given a contract, despite their repeated demands. “We worked for two months like that, being paid every two weeks. But then the payments stopped.”

The workers, unable to pay for their lodgings, soon found themselves out on the street.

After going for three months without pay, they finally stopped working and turned to the posted workers’ advice bureau of the German trade union confederation Deutscher Gewerkschaftsbund (DGB).

The organisation contacted the employer, who paid a small fraction of the wages pending, then nothing more.

Most of the Romanian workers subsequently went back to their country. Seven of them stayed and started to hold daily pickets in front of the brand new shopping centre, with the support of the independent union Freie Arbeiter-Union (FAU).

“We used to sleep in one of the construction site containers,” says Ovidiu.

These men were then given refuge in the offices of the FAU and partner organisations. They are now surviving thanks to help from the union.  The investor in charge of the shopping centre has shifted all responsiblity for the situation on to the subcontractors that hired the workers.  The general contractor has done the same.  The latter, moreover, filed for bankruptcy in December.

“We have become very familiar with these little games over recent years. After three, four, five weeks, a new, similar company is established under a new name, and wants nothing do with any pending obligations,” denounced the Berlin spokesperson of the DBG, Dieter Pienkny, on a German public radio station. “The Romanian workers are now preparing a lawsuit to claim their unpaid wages.”

“The tip of the iceberg”

Migrant workers in Germany’s construction industry are increasingly faced with abusive practices of this kind.

In March 2014, the German union representing construction workers, Industriegewerkschaft Bauen-Agrar-Umwelt (IG-BAU), took on a similar case, defending 50 building workers in Frankfurt who had not been paid for months. The company was finally forced to pay the €100,000 (US$106,230) in wage arrears.

“More and more construction and public works companies are turning to labour subcontractors. As a result, a whole host of firms has sprung up specialising in the supply of cheap labour for construction projects,” explains Frank Schmidt-Hullmann, head of migrant workers’ affairs with IG-BAU.

“They are not genuine construction firms. They look like it on paper, but their only activity is, in fact, to supply labour at a low cost. They are brass plate companies that often only pay wages for the first few months. They then stop paying and expect the workers to keep going until the job is finished, in the hopes that they will be paid at the end of the contract.

"We are constantly coming across situations like this. And we only know about the cases that are presented to a union. It’s the tip of the iceberg.”

Most of the migrant workers in this situation are employed under the status of EU posted workers.

The EU Posted Workers Directive allows companies from the European Union to hire temporary workers under the social security system of another country.  "Businesses are using this directive to exploit the difference in social contribution and pay levels between countires," denounces Frank Schmidt-Hullman.

"Migrant construction workers come from countries where salaries are very low.  When a construction worker earning  €300 to  €400 (US$-318-US$424) in Romania is offered  €1200 to come and work in Germany it seems like a lot of money, initially.  But it is much lower than the German wages in the sector.  Moreover, their lodging and travel expenses are generally deducted from this amount, although this is illegal under the posted worker legislation."

Recent years have seen ever-increasing numbers of imigrants employed on German building sites under the status of posted worker.

And the total opening of the German labour market to Polish workers in 2011, followed by Romanian and Bulgarian workers in 2014, has done nothing to improve matters.

“The companies using subcontractors to hire posted workers do not, in any case, want to hire workers directly,” says Frank Schmidt-Hullmann.

The trade unions are now faced with another form of exploitation: the abusive practice of hiring migrants as self-employed workers. “In this case, they no longer have any of the rights enjoyed by employees. They cannot claim the right to minimum pay or social insurance.

As a result, many Romanians and Bulgarians working in Germany find themselves in a particularly precarious situation.

Recent studies conducted by the employment research institute of the German employment agency reflect the difficulties they face.

Much higher than average numbers of Romanians and Bulgarians have to rely on social assistance despite being in work: 7 per cent receive state assistance to supplement their inadequate wage income, compared with 3.3 per cent of the overall population.

To fight against these abuses, German trade unions are demanding more inspections on the country’s construction sites.

This article has been translated from French.