How the reckless Hobby Lobby decision has excited the imagination of the right wing. 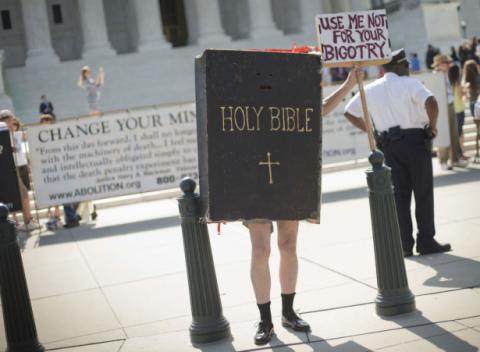 The public wrath directed at God-fearing Republican politicians in Indiana and Arkansas is pounding on the wrong Christians. The real culprits are the five Bible-thumping conservatives on the Supreme Court. They inspired this controversy with their inflammatory decision last year in the Hobby Lobby case.

The Supreme justices ruled then that corporate owners possess religious convictions entitled to First Amendment protection against intrusions by the federal government. That case was about birth control and Obamacare’s mandated healthcare coverage. But the Court’s half-baked logic excited the imagination of right-wing activists and lawyers.

If employers can reject the birth-control pills for their employees by citing their religious objections to contraception, do employers also have a right to refuse serving gay couples because they abhor same-sex marriages? Conservatives set out to initiate state laws and law suits designed to provoke more constitutional conflicts between church and state—cases that can wind up before the Supreme Court and will be decided by the same right-wing majority that issued the Hobby Lobby ruling.

However, one citizen’s religious convictions may look like old-fashioned bigotry to other citizens who suffer the consequences. Alex Luchenitser of Americans United for Separation of Church and State wonders if the Supreme Court has opened the door to “a new era of inequality.”

“Hobby Lobby,” he wrote in the Harvard Law and Policy Review, “is a sweeping decision that threatens to turn the Religious Freedom Restoration Act of 1993 (RFRA) into a law that, instead of protecting religious freedom, allows religious believers to force their faith on others in a variety of ways.”

Before the recent uproar occurred, Luchenitser had predicted it. Hobby Lobby“may trigger a drastic uptick in claims for religious exemptions,” he said, though plaintiffs in the most publicized cases (like the photographer who refused to do wedding pictures for a gay couple) have so far lost in court.

The Hobby Lobbydecision “may particularly impact LGBT cases,“ he explained. Because there is no federal law prohibiting discrimination against LGBT citizens, so most of the new cases will originate at the state level under state laws. Complaints that gain traction can eventually wind up in federal courts.

President Obama, for example, issued an executive order telling federal contractors they must not discriminate against gays and lesbians. “It will not be surprising if religiously affiliated federal contractors rely on Hobby Lobby to argue for an exemption to the prohibition against anti-LGBT discrimination,” Luchenitser wrote.

This result is very different from what Senators Orrin Hatch of Utah and Teddy Kennedy of Massachusetts had in mind back in 1993 when they co-sponsored the original RFRA. Both senators emphasized that the original legislation was a bipartisan attempt to avoid petty church-state conflicts and defuse nettlesome issues that might mean a lot to various faith groups but have only trivial effect on government’s objectives.

Should horse-drawn Amish buggies be compelled to carry state-required warning of a slow-moving vehicle? Does a municipal law banning consumption of alcohol apply to serving wine at communion services? Did a public school ban on wearing headgear in class prohibit Jewish yarmulkes?

The Roberts Court blew away the original law’s careful restraints. The justices reinterpreted the RFRA and granted First Amendment rights to the private religious views of some company owners. Some of the new laws enacted by state legislatures like Indiana’s attempt to expand things further. When Governor Mike Pence insisted Indiana’s law did not explicitly authorize discrimination against gays, he was technically correct. What he didn’t say is that the law is deliberately designed to encourage true believers to litigate and it strengthens their legal foundation for winning.

There will be more lawsuits, because the justices created their own ambiguities in Hobby Lobby that can provide the fodder for more Supreme Court decisions. The Court, for instance, did not ask the employees at Hobby Lobby how they felt about their boss’s declaration of conscience. Would they be fired if they express dissent? Does the First Amendment protect their conscience and free speech?

Nor did the Supreme Court make clear whether these new religious rights apply only to closely held corporations controlled by families or also for very large companies theoretically “owned” by millions of shareholders and institutional investors including union pension funds. How would any prudent investor find out what his company’s religious values?

The Hobby Lobby case opens important implications for corporate governance that I suspect most companies would dread. Walmart is a leading example of potential contradictions—the largest retailer in the nation with 2.2 million employees and controlled by a family of four billionaires with a total net worth around $156 billion.

Wal-Mart swiftly announced its opposition to Arkansas’s “religious freedom” legislation and this “good guy” declaration was joined by many other influential corporate names. The media described their decision as “good for business,” and perhaps it was. But I have a hunch something more was involved. Savvy corporates may also see a dangerous potential for them in mixing law and religious values in an unstable brew.

If the corporation has the right to protect itself from government by hiding behind its supposed religious values, does the public have a right to know what those values are?

The lawyer for Americans United for Separation of Church and State drew a strong conclusion:

“Religions should not become a trump card that allows one who professes it to hire or serve whomever they want. Hobby Lobby represents a step in the direction of such a retrograde society, atomized and divided by corporate theocracy.”