We should not to romanticise the work of the past, indulge in ‘smokestack nostalgia’, but equally we need to acknowledge a world we may be losing. While the ‘job for life’ may have been a fleeting experience for a few, the social patterns that that stability engendered were profound for generations of workers and can still be seen working their way through the contemporary workplace 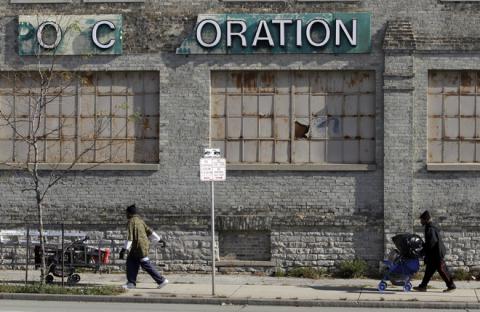 Recycling scrap metal has become one of the few viable business models in the economically depressed 53210 ZIP code in Milwaukee. ,Rick Wood

One of my favourite exercises when teaching the sociology of work is to ask my students about the concept of a ‘job for life’. I started doing this a decade and a half ago at the beginning of my lecturing career. I asked the eighty odd twenty-somethings in the class in front of me ‘who’s heard of the phrase “a job for life” ’? When I first did this, maybe half the hands went up. I then asked, ‘Who here expects one’? That first time, and in subsequent trials, no hand went up. One guy did shout out, ‘But who would want one’? Over the years I’ve often tried this experiment with different classes, even asking it during open-day presentations for prospective students where the presence of their parents give an intergenerational frisson and a knowing look from the greyer heads in the audience. The receding knowledge of the term and the expectations that went with it speaks volumes about what has happened to our contemporary ideas about work.

I was thinking about that experience reading David Weil’s book The Fissured Workplace, a thoughtful and thought provoking reflection on the contemporary US workplace. By ‘fissured’ Weil means the wide range of ways in which work has been desiccated. Where traditional work was stable and intelligible, increasingly one is never sure who is responsible for the product supplied or service purchased. Weil outlines a number of types of fissuring, from subcontracting to outsourcing to franchising. Weil persuasively groups together a range of diverse strategies through which ownership and control are exercised through layer upon layer of intermediaries. The book offers a litany of corporate attempts to squeeze more profit from the bottom-line by laying-off risk and responsibility, citing examples from industries as diverse as cell phones, hotels, and coalmining. Fissuring is about saving money and restricting liability, ideally removing it all together.

Many of the instances of fissuring that Weil gives are not new for working-class people. Many working-class and trade union struggles have been over the attempt to secure at least some kind of work stability. The interesting thing about Weil’s metaphor is that it transcends blue-collar work, where poor conditions are more common, and increasingly affects traditionally middle-class white-collar environments such as journalism and publishing. This idea of fissuring adds to the emerging lexicon describing the contemporary and potential future nature of work. Like the idea of precarity that Guy Standing has talked about, fissuring makes sense of the common features and patterns that cross industries, sectors, and whole labour markets. The concept describes the splitting apart and the simultaneous corrosion or erosion of workplace sociability and culture. Fissuring gets to the heart of how contemporary work offers workers, their families, and whole communities even less of the limited stability that they enjoyed in the past.

For working-class people on both sides of the Atlantic, the ability to access good work is important for a number of obvious and perhaps less obvious reasons. Ask anyone why they work, and as like as not they will say ‘money’ and give you a look as if to say ‘are you crazy’? But dig deeper and it becomes apparent that while the cash is vital, so too are a whole range of other features of work thatStuds Terkel described as things that ‘make the day go faster’. To some extent, all work socialises us, and that, in turn, allows us to play our part in socialising others. When I interview workers, the older ones especially, they often reflect on the significant people who have marked out times of transitions in their life — the most obvious moment being the initial move from school or college to their first place of employment. It often takes a whole lifetime of work before the subtlety of what they enjoyed becomes apparent to them, the way people and places helped to shape them as humans. It is only in the reminiscence that they see the value of workplace culture, even though their younger self may have ignored or hated the experience at the time. In various ways it moulded them, and they in turn help to cultivate and mature others. I am not saying that all work in the past was great, nor that ‘good work’ was accessed by all. Rather, I think a critical mass of working-class people experienced a level of stability that made a difference to their lives inside and outside the workplace. I’d go further and say that critical mass made a difference to the quality of work elsewhere, too. It afforded some working-class people the space to think and grow through employment.

When I read the David Weil’s book, I thought of the effect this fissuring has on working-class employment. The patterns of workplace culture have been undermined and changed hugely over the last three decades, but the shifts explored in The Fissured Workplace add a new and urgent dimension. What Weil describes is nothing less than the breaking down of any sort of medium or long term stability for workers. In the fissured workplace, relationships are contractual rather than social. The ability of people to join together, to socialise and be socialised, becomes increasingly limited.

For the young people I teach, The Fissured Workplace probably reads like a description of their experience of the world of work rather than as a critical analysis. We should not to romanticise the work of the past, indulge in ‘smokestack nostalgia’, but equally we need to acknowledge a world we may be losing. While the ‘job for life’ may have been a fleeting experience for a few, the social patterns that that stability engendered were profound for generations of workers and can still be seen working their way through the contemporary workplace. As for my student’s question about who would want a job for life, I would probably answer now that many working-class people would at least like the option of one.