How To Destroy A Black Life: A Step-By-Step Guide

Getting captured on film was the only "mistake" police officer Michael Thomas Slager made when he killed Walter Scott. Otherwise, he did everything by the book, and likely would never have been charged. 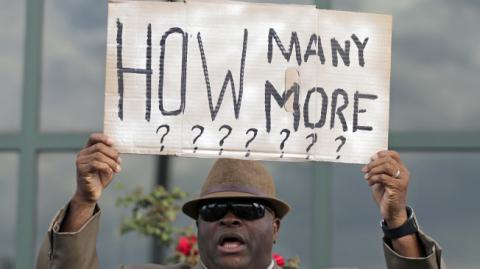 Michael Thomas Slager did everything by the book. The South Carolina police officer’s only mistake was being filmed. But his approach in killing Walter Scott, seeming to plant evidence, and initiating a cover-up was a classic scenario of how cops get away with murder. Given what we know about police shootings, it wouldn't surprise me if Slager was coached after he shot and killed Walter Scott. But judging by his dispatch call following the shooting, he was already pretty skilled at using the system to his advantage.

Slager first establishes that he was the one who was threatened. In his dispatch call he said that Scott was reaching for his Taser. But Scott was running away when he was shot. In many instances of police murder and abuse, cops scream at the top of their lungs, “Stop reaching for my weapon,” whereupon every black person recognizes that the situation is being artificially amped up by the officer. In the first moments of Slager’s dispatch call, he quickly establishes this by stating that Scott was reaching for his Taser. It was easy for Slager to say. Almost too easy. Throughout the video, Slager methodically went through the motions of someone used to orchestrating pre-meditated acts of violence.

Every “victimized cop” needs a monster. The next important thing a police office can do is play on the white majority’s instinctive fear and belief in the wild, terrifying “other.” It doesn’t matter if the citizen is in front of his home and reaching for his wallet like Amadou Diallo, holding a sandwich like Vonderrit Myers Jr., bicycling through a parking lot like Jordan Baker, standing on the corner like Eric Garner, sitting in his grandmother’s house like Ramarley Graham, or picking up a perfectly legal air rifle from a Walmart shelf like John Crawford III.

Their deaths are attributed to an almost animalistic ability of black and brown bodies to lunge at fully-armed and weapons-trained law enforcement who are often outfitted with gun, club, pepper spray and Taser. The hundreds of people murdered by cops every year always seem to have this mythical lunging-and-wrestling skill that far exceeds most normal humans. These citizens are rarely seen as people with families, dreams and goals.

In the video, Slager appears to drop an object—very likely his Taser—by Scott’s lifeless body. Local NARC and SWAT teams have a notorious reputation of bursting into people’s homes and, when they can’t find what they’re looking for, covering their tracks by planting drugs. (If you don’t believe me, just google “NARC planting evidence” and a treasure trove of examples will pop up in every region of the country.) In some cases, local cops have started up websites to exchange tips and tell stories about how to plant evidence and set up citizen, as in the case of thePalm Beach Sheriff’s Anonymous Message Board, filled with helpful advice on such matters.

Handcuffs make anyone look guilty. Long after Eric Garner stopped moving, he laid on the sidewalk, shackled. The handcuffs also make it possible to explain that the “monster” was still alive despite being electrocuted by Tasers, beaten and/or shot. When DWB (driving while black), it’s common for cops to cuff motorists and leave them sitting in a police car or by the side of the road for public display. Often this happens before the cop has even run the motorist’s license. It’s a humiliating and guilt-associative object. In this case, Slager handcuffed Scott’s body, probably lifeless at that point.

You would think that when a violent confrontation results in a death, trained officers would immediately provide medical assistance. Given that almost all these victims were unarmed and motionless, it would be the humane thing to do. Yet neither Slager nor the other cop arriving at the scene attempted CPR, and it was several more minutes before medical help arrived. One of the most extreme examples of this was in the case of NYPD officer Peter Liang murdering Akai Gurley in a housing project staircase, the time delay in calling for an ambulance allows the officer to call his lawyer, consult with the police union, and begin to work on getting his story straight.

When questions arise after the latest case of police brutality and/or killing, most law enforcement units are quick to dig into the dead person’s background and release any damaging information. If the victim is too young—as in the case of 12-year-old Tamir Rice or 7-year-old Ayianna Jones—then they smear the family and parents, implicating their children in the process. In the case of Walter Scott, he has an arrest record. Even though these arrests are for mostly non-violent crimes, like not keeping up with his child support payments, the paper trail helps justify his death.

Perhaps things will be different this time. Slager was charged with the murder of Walter Scott, which is incredibly rare in America. (Cops are rarely indicted for these incidents, and even fewer are convicted, regardless of videotapes and evidence.) A crowdsourcing campaign for Michael Slager has already been rejected by GoFundMe. But it’s not over yet. Judging by history, there is a good chance that Slager ends up free. And another campaign on IndieGoGo is going strong. These are the rewards of playing things by the book.

Aurin Squire is a freelance journalist who lives in New York City. In addition to being a playwriting fellow at The Juilliard School, he has writing commissions and residencies at the Dramatists Guild of America, Brooklyn Arts Exchange, and National Black Theatre.