Faculty Join Fast Food in the Fight for $15

Like the other low-wage workers that protested yesterday, the ultimate goal of the burgeoning adjunct faculty movement is fair pay and decent working conditions. What yesterday’s demonstrations showed was that this could be a substantial and sustainable struggle that is primed to create waves throughout the labor market. And unifying all low-wage workers—from fast food to faculty—will be an important part of that. 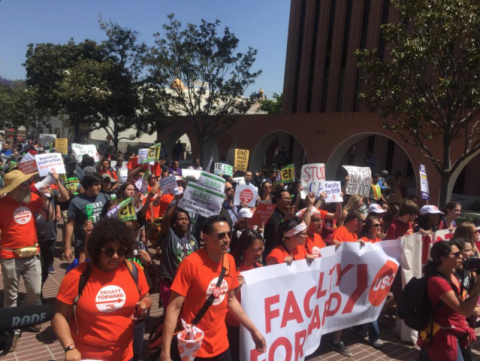 Adjunct faculty march for better pay and working conditions at the University of Southern California on April 15, 2015. ,Faculty Forward USC

As yesterday’s Fight for $15 protests wound to a close across the country, it’s become clear that this movement is not a fleeting effort—it’s here to stay. The focal point has primarily been on the most visible low-wage workers: fast food and retail workers whose pay perpetually hovers around minimum wage. And their employers seem to be taking a small, yet encouraging, step in the right direction as both McDonald’s and Wal-Mart recently announced increases to their respective minimum wages.

However, another employment sector that’s not typically associated with low wages was prominent yesterday as well: the American professoriate.

Higher education institutions in the United States employ more than a million adjunct professors. This new faculty majority, about 70 percent of the faculty workforce, is doing the heavy lifting of academic instruction. These are positions with tenuous job security (often semester-by-semester), sparse instructional resources, limited academic freedom, and meager wages—the average working adjunct makes around $3,000 per three-credit course. An astounding 20 percent of part-time adjunct faculty rely on government assistance, according to a recent report from NBC News.

That is to say, many faculty in the United States are among the ranks of low-wage workers. From Seattle University in Washington and the University of Southern California, to schools in Chicago and North Carolina, adjuncts made it clear yesterday that they are fed up with their second-tier status. This isn’t the first mass mobilization of adjuncts either. Adjuncts across the country participated in a National Adjunct Walkout Day back in February.

While fast food workers called for $15 an hour, adjuncts rallied for a base pay of $15,000 per course—an aspirational standard initiated by SEIU’s new Faculty Forward campaign.

In Portland, Oregon, adjunct Tiffany Kraft led a Fight for $15 rally of hundreds of workers—everyone from fast food and home care workers to local carpenter union members and part-time adjuncts. “It was such good energy,” she says. They first marched on the Portland City Hall, filling the cavernous halls with echoing chants, before heading to the Portland State University campus.

“I don’t think people understand how oppressive it is to work without security. To work on a terminal, sometimes ten-week, basis, without knowing you’ll be re-employed,” she says. “It wears on you psychologically, physically. Not only are you underpaid, there’s absolutely no respect. Over time, that hurts.”

In Washington, D.C., SEIU Local 500 held a rally outside the University of the District of Columbia (UDC) campus to raise awareness for adjunct working conditions. Among the phrases chanted by a small but enthusiastic crowd: “What’s disgusting? Union busting. What’s outrageous? Adjunct wages.”

As is the case for most community colleges across the country, the UDC Community College relies heavily on adjunct professors to teach its courses. “It’s a way to get excellent professors for cheap labor,” says Willie-Lloyd Reeves, a UDC adjunct professor and member of the UDC Part-time Faculty Union Steering Committee for SEIU’s Local 500.

The Washington, D.C., area has been a major success for adjunct organizing. The Local 500 has unionized the majority of adjuncts working in higher education in the city and surrounding suburbs, and ultimately served as a template for SEIU to launch its nationwide campaign, Adjunct Action, which set a goal of organizing one million adjuncts under the auspices of SEIU.

UDC adjuncts voted to unionize this past summer and have spent several months since then trying to bargain a fair contract with the administration. In addition to calling for better compensation and benefits, adjuncts are demanding things that would seem rather basic for professors: a transparent evaluations procedure; a reasonable assumption of job security; access to the services and materials necessary to teach—like, say, offices.

Like the other low-wage workers that protested yesterday, the ultimate goal of the burgeoning adjunct faculty movement is fair pay and decent working conditions. What yesterday’s demonstrations showed was that this could be a substantial and sustainable struggle that is primed to create waves throughout the labor market. And unifying all low-wage workers—from fast food to faculty—will be an important part of that.