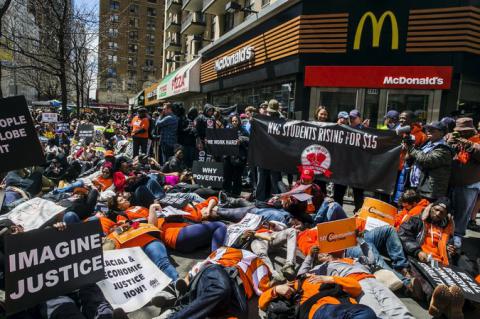 A "die-in" outside a McDonald's in Manhattan during a rally for higher wages, one of many protests on pay held across the country Wednesday. , Lucas Jackson/Reuters // The New York Times

I threw everything aside to write to you as soon as I heard about your troubles. You know, last week, when you stumbled across thousands of fast-food employees, home health care aides and other low-wage workers who were demonstrating in Midtown Manhattan.

You were on your way somewhere, right? Driving or biking, maybe, when you encountered those protesters calling for a $15 minimum wage? They converged on Columbus Circle as they marched to Times Square, joining tens of thousands of people around the country calling for better pay. And in that moment, as you were stuck in the traffic snarled by that rally, something touched you. Something inspired you to speak out.

Your instinct, of course, was to let loose on Twitter:

“Life in NY is hard enough as is. The goal is to not make it more so. How does clogging rush hour traffic from 59th St to 42 do any good?”

It was what so many socially conscious New Yorkers were thinking! Can’t the protesters all go home? Can’t they protest in their own apartments? Or, if they must make a public spectacle, can’t they take to the streets at 2 a.m., when most of us are sound asleep, not trying to drive to the Upper West Side?

Mr. Baldwin, I’ve always been a big fan of yours — loved “30 Rock” — and I’ve written quite a bit about workers who are still struggling during this post-recession recovery. So I must confess that I worried that your Twitter message sounded just a teensy bit insensitive to the protesters who, after all, just want to feed their families, pay rent and try to stay afloat. Or maybe you agree with some business owners who say that a $15 minimum wage is unsustainable?

“Oh, I support their cause. The timing of their event wasn’t what good NYers would do....”

What a relief! That message really eased my mind. I’m sure that it made Julia Andino, a single mother who works at McDonald’s, feel better, too. Maybe you saw her? She was protesting because she earns $8.75 an hour — minimum wage in New York State — and struggles to pay the rent for the single room that she shares with her 3-year-old son.

Perhaps you noticed Patricia O’Hara, a home health aide who earns $10 an hour caring for older patients and strains to pay all of her bills. Or Ashley Wiley, another McDonald’s worker, who gets paid $9.19 an hour and has to rely on Medicaid and food stamps to help support her three sons.

They were all out on Wednesday evening, marching, chanting and calling for change that might improve their lives.

“ NY’s ethos dissolves every day that individuals or groups put their needs/goals ahead of everyone else’s.”

“There are ways to rally people to your cause without inconveniencing an entire City.”

The convenience factor! Now, that, Mr. Baldwin, is an issue that doesn’t get raised every day by your fellow supporters of a living wage. And it reminds me that this point rarely comes up when we consider the history of social movements in the United States: the sheer inconvenience that peaceful protests create for people who are not protesting.

Just think back to the recent coverage of the 50th anniversary of the 1965 “Bloody Sunday” march across the Edmund Pettus Bridge in Selma, Ala.

I watched some of that on television and not a single correspondent that I saw posed the pointed question: What kinds of traffic disruptions did those civil rights activists cause when they tried to cross that bridge?

O.K. You’re absolutely right. This letter is beginning to take on a snarky tone. (I would have loved to discuss my snarkiness with you directly, but your publicist, Jillian Taratunio, informed me that you had decided not to do any interviews about last week’s protest. But I digress.)

So I’d like to conclude by offering you a bit of advice. The next time you’re stuck in traffic because of a rally for a living wage, please don’t pick up your smartphone to post your complaint on Twitter.

Think instead of the workers who are trying to put food on their tables and keep a roof over their heads. Remind yourself that if traffic is your biggest hassle on a Wednesday night in New York City, you’re probably doing just fine.

[Rachel L. Swarns has been a correspondent for the New York Times since 1995. She has written about domestic policy and national politics, reporting on immigration, the presidential campaigns of 2004 and 2008 and First Lady Michelle Obama. She has been a foreign correspondent for the Times, reporting from Russia, Cuba and Southern Africa, where she served as the Johannesburg bureau chief. She has also worked for the Miami Herald, where she covered the L.A. riots and the aftermath of Hurricane Andrew, and at the St. Petersburg Times. She lives in Washington, D.C., with her husband and two children.]

A version of this article appears in print on April 20, 2015, on page A14 of the New York edition with the headline: An Actor Backs Living-Wage Protesters (as Long as They Don't Snarl Traffic).