Sister Rice Goes After the Bomb

Federal authorities are treating an 85-year-old Catholic nun like a nuclear saboteur. 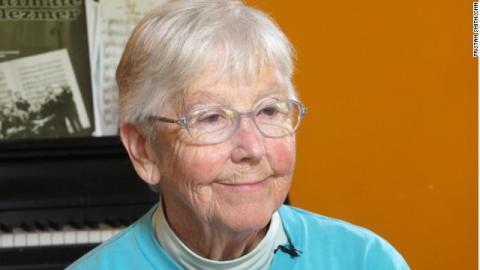 Last March, Sister Megan Rice stood before a federal court in Cincinnati. Along with her companions Michael Walli and Greg Boertje-Obed, the 85-year-old Catholic nun was appealing a serious conviction.

Their charge? Sabotaging the “national defense.”

Sabotage, which conjures up images of derailed troop trains or water poured into the gas tanks of military vehicles, is a charge prosecutors hardly ever invoke in peacetime. What could these gentle activists have done to warrant it?

On a summer’s eve in 2012, they made their way to the federal Y-12 Nuclear Complex in Oak Ridge, Tennessee. There, the Department of Energy warehouses the enriched, weapons-grade uranium used in the manufacture of nuclear weapons.

Armed only with bolt cutters and small hammers, the three defendants cut their way through a number of fences to reach the storage building. In a series of symbolic gestures of protest, they poured some of their own blood on the outside of the building and hammered away a tiny piece of one of its corners.

Then they prayed, sang hymns, and waited to be arrested. They caused no functional damage to the building and didn’t attempt to enter it.

Pressed by federal prosecutors, the three people of faith refused to accept a guilty plea for “depredation of government property.”

Nuclear Controlled Area
rocbolt/Flickr
They believed that the object of their protest — a nuclear weapons arsenal capable of wiping out the human race — was infinitely more criminal than their act of protest itself. So the government, in an unprecedented demonstration of spitefulness, raised the charges to sabotage.

Legally, sabotage consists of two elements, both of which must be present to produce a conviction.

The first is the destruction of “national defense property” — in this case, holes cut in four fences. The second is intent to injure or obstruct “the national defense of the United States.”

Where was that injury at Oak Ridge? The government argued, incredibly, that the temporary distraction of a few security personnel fit the bill. Even more incredibly, the jury bought that argument.

The Y-12 employees who came to arrest the old nun and her fellow protesters weren’t taken away from computers monitoring incoming rockets — there are no such computers at Y-12. They weren’t waiting for word from the president to launch nuclear weapons at an enemy — there are no launch pads for ballistic missiles at Y-12.

In fact, Y-12 is a warehouse, not a command center. And the defendants had no access to the nuclear material stored there, nor did they seek it. If anything, they served the “national defense” by demonstrating how inadequate the security was at Y-12.

There’s more at stake in this case than the heavy sentences — three years for Sister Rice, five each for her companions — imposed on the three defendants. If the court upholds their convictions, it will vastly increase the definition of “sabotage” to include nonviolent protest against government policies.

A similar redefinition is underway for the charge of “espionage,” which prosecutors have levied against conscientious whistleblowers like Edward Snowden and Chelsea Manning. In both cases, the government has found new weapons to punish people whose only real crime is embarrassing the authorities.

The three protesters at Oak Ridge called their action “Transform Now Plowshares,” taking their cue from the prophet Isaiah’s mandate to transform swords into plowshares.

But if their convictions stand, it will set a precedent for transforming protest into sabotage.

Peter Weiss is the President Emeritus of the Lawyers Committee on Nuclear Policy.