Should we be wondering if the prosecution of cheating Atlanta teachers for racketeering was racist? Or should black parents and educators be leading a movement against high-stakes standardized testing as the gateway tool to privatizing public education in black and brown communities across the country? 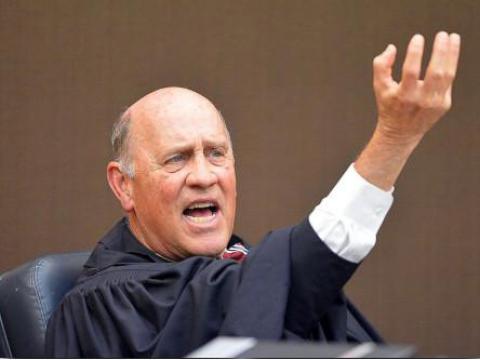 When drama queen Fulton County judge Jerry Baxter demanded public post-conviction apologies from Atlanta teachers already convicted of racketeering lest he hand them double digit sentences, it struck raw nerves in parts of black America. Black pastors and community leaders called press conferences. They held rallies and issued stern statements. They denounced the judge for making “common criminals” out of black teachers. Inevitably, they wondered whether white teachers would have been prosecuted or subjected to post-conviction humiliation of this kind.

They're asking the wrong question. What they ought to ask is why the teacher perp walk is being served up in the first place. They need to ask who profits from the continuing crisis in public education in black and brown communities? The answers are not hard to find.

The whole thing, from the indictment of Atlanta Public Schools superintendent Beverly Hall, who died before the trial was complete, to the posturing of public officials and corporate media about “cheating the children” is the latest act of a long, long fake crisis. Judge Baxter's histrionics too, in which he called the cheating scandal “the sickest thing that's ever happened to Atlanta,” were a great contribution to the story our billionaire-owned media wants to paint about public education.

The one-percenters need us to believe public education in our communities is some new kind of sewer infested with incompetent teachers who are cheating children and the public every week they draw paychecks. The long, long crisis of public education has been designed, engineered and provoked by powerful bipartisan forces to justify their long game, which is the privatization of public education. That's the Big Plan.

Since at least 2001, when George W. Bush's conservative Republicans teamed up with Massachusetts Sen. Ted Kennedy's liberal Democrats to pass and implement the No Child Left Behind Act, it's been the policy of both capitalist parties implemented by the federal Department of Education to create, to provoke and to exacerbate a phony educational crisis. This program of crisis-creation has been backed by Wall Street, by banksters and hedge fund types, by giant corporations like Wal-Mart and powerful right wing interest groups like the US Chamber of Commerce as well as the so-called philanthropic tentacles of corporate America like the Gates, Broad, Heritage and Walton Family Foundations. The solution to the fake crisis has been the whole industry of testing experts, turnaround consultants, diploma mills for fake principals, lucrative charter school companies and their contractors, and the private but government sanctioned agencies that rate school districts. Even the agencies that rate school districts are staffed by the same “run the school like a business” experts approved by the US Chamber of Commerce who were employed to write President Obama's Race to the Top program, which punishes school districts that don't privatize or implement “run the school like a business 'reforms'” fast enough.

High stakes standardized testing, like the tests educators cheated on in Atlanta, is an essential tool in provoking the crisis, but it's a big lie. These kinds of tests don't reflect student progress or teacher competency. They track to family income, and family income in the US correlates largely to race. So as Glen Ford put it back in 2012

“The standardized tests were bombs, designed to explode the public schools and the teaching profession. Everyone involved knew that inner city kids would fail the tests in huge numbers, setting the infernal machine in motion for the closing of schools and the wholesale firing of teachers...”

The bombs were planted not just in Atlanta, but in thousands of school districts across the nation, with predictable results. A 2012 story in the Atlanta Journal-Constitution revealed that the same suspicious patterns of radical test score improvement seen in Atlanta could be found in more than 200 school districts across the country, from Philly to Portland, and from Alaska to Alabama. Clearly, cheating teachers and principals in Georgia were and likely still are doing the same things the same way as their colleagues across the country.

It's also very true that Atlanta's teachers were singled out. Other teachers in other states were merely stripped of their jobs and professional licenses. Teach For America alums Michelle Rhee and Kayla Henderson both headed Washington DC's public schools when massive cheating scandals occurred, but unlike Atlanta's Beverly Hall, neither they nor their subordinates are in any danger of prosecution. Atlanta on the other hand, is closely associated with the notion of African Americans running big cities, so making the example of black educators in Atlanta makes perfect political sense for those orchestrating the crisis. Still we shouldn't feel too sorry for the Atlanta teachers. Beverly Hall turned big chunks of Atlanta's public schools over to privatizers, and even helped divert $140 million a year for more than 20 years away from Atlanta's public school children to line the pockets of developers and gentrifiers in a lucrative boondoggle Atlantans know as “the Beltline.”

If the black political class and black educators really stood for the interests of their students and communities they would be educating black parents and students across the country about their right to opt out of tests that serve no legitimate educational purpose, as teachers in Chicago and Seattle are already doing.

But that's problematic too. Opposing standardized testing would place the black political class in conflict not with the slippery nebulous demons of institutional racism, but biting some of the very real and easy-to-find hands in corporate America that feed it. Taking issue with standardized testing, Common Core and the drive to privatize education would put black educators in opposition to corporate America, to the Gates, Walton Family (Wal-Mart), Eli Broad and other foundations, and to Republicans and Democrats including President Obama and Arne Duncan, his Secretary of Education. This is not an easy thing to do when national black “civil rights” organizations from the National Action Network and the National Urban League have eagerly accepted corporate-engineered school reform with corporate dollars, and President Obama is deeply beholden to the charter school sugar daddies.

So it looks like we can count on our black political class to stick to the script on the Atlanta teachers cheating scandal. They'll talk about whether the prosecution was racist, and they'll wring self-righteous hands over teachers “cheating the children.” But they won't question those who set up the rigged game of high stakes testing or why.

Bruce A. Dixon is managing editor at Black Agenda Report and serves on the state committee of the GA Green Party. Contact him at bruce.dixon(at)blackagendareport.com.