Halley's Eclipse: A Coup for Newtonian Prediction and the Selling of Science

300 years ago, on the 3rd of May 1715, a rare solar eclipse occurred over England. It was an opportunity too good to miss for those promoting new astronomical theories – and their own careers. 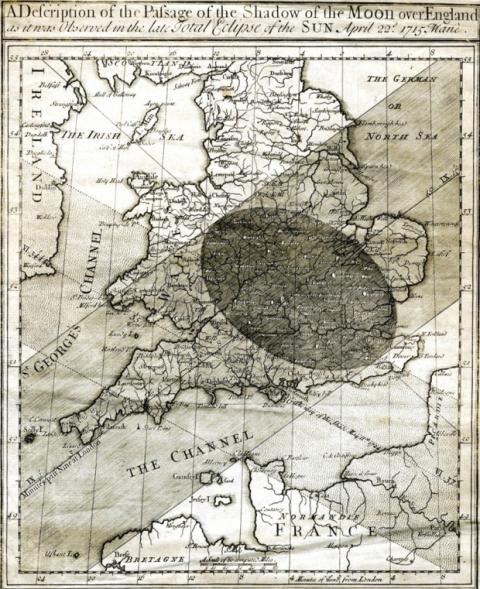 Edmond Halley’s second, corrected map of the 1715 eclipse, produced after the event., Institute of Astronomy Library /University of Cambridge

In 1715, 300 years ago today, a total solar eclipse was visible across a broad band of England. It was the first to be predicted on the basis of the Newtonian theory of universal gravitation, its path mapped clearly and advertised widely in advance. Visible in locations such as London and Cambridge, both astronomical experts and the public were able to see the phenomena and be impressed by the predictive power of the new astronomy.

Wikipedia will tell you that this is known as Halley’s Eclipse, after Edmond Halley, who produced accurate predictions of its timing and an easily-read map of the eclipse’s path. Halley did not live to see the confirmation of his predictions of a returning comet – a 1759 triumph for the Newtonian system – but he was able to enjoy his 1715 calculations, which were within 4 minutes, and to improve on them with a corrected map (above). He observed the eclipse from the Royal Society’s building in Crane Court on a morning with a sky of “perfect serene azure blew”.

Halley’s first eclipse map, published as a 6d broadside by John Senex shortly before the event, is a prime example of Halley’s use of cartography to present information clearly and effectively (as with his beautiful maps of magnetic variation and trade winds). It was offered as a public service and a call for scientific data. Halley asked “The Curious” to observe the eclipse to help improve future predictions. This, he said, should be done “with all the care they can”, but in order to determine “the Situation and dimensions of the Shadow” rather than to avoid eye damage. Presumably he assumed that “The Curious” knew that they needed to project the Sun’s image to measure it. Let’s hope they did!

Halley, however, also used his map to inform the less knowledgeable, and to trumpet the successes of natural philosophy:

The like Eclipse having not for many ages been seen in the Southern Parts of Great Britain, I thought it not improper to give the Publick an Account thereof, that the sudden darkness, wherein the Starrs will be visible about the Sun, may give no surprize to the People, who would, if unadvertized, be apt to look upon it as Ominous, and to interpret it as portending evill to our Sovereign Lord King George and his Government, which God preserve. Hereby they will see that there is nothing in it more than Natural, and no more than the necessary result of the Motions of the Sun and Moon; And how well those are understood will appear by this Eclipse.

Eclipses have been predicted since ancient times, although usually lunar rather than solar. The former (where the Earth’s shadow comes between the Sun and the Moon, rather than the Moon passing between the Earth and the Sun) are much more frequent and less complicated to calculate. Predicting solar eclipses accurately requires understanding of the fiendishly complex motion of the Moon – and seeing them requires a lot of patience. The list of eclipses visible in Britain in the 17th and 18th centuries shows just how lucky it was that such an exceptionally well-placed eclipse crossed London after regular observation of the the Moon had begun at the Royal Observatory and Newton had tussled with its theory in his Principia Mathematica.

Halley wasn’t the first to map a solar eclipse, either, with such charts having appeared since the 17th century. He gets the credit he does because of the intuitiveness of his map, the accuracy of his prediction and his use of Newton’s theory. However, he wasn’t the only one making and representing accurate predictions for 1715.

Another was the Astronomer Royal John Flamsteed, whose lunar observations, which helped him develop his own theory, had been crucial to Newton’s work. He felt that Newton had consistently failed to give him credit for this work, and he could never forgive either Newton or Halley for having forced him to hand over observations and, in 1712, printing a pirate version of his star catalogue. However, in Greenwich he still ruled the roost: if you visit the Painted Hall at the Old Royal Naval College you might spot Flamsteed in one corner, in triumphant command of the eclipse. John Flamsteed, with assistant Thomas Weston, an eclipse diagram and telescope trained on the Moon, in the Painted Hall of the Old Royal Naval College, Greenwich. Photograph: Graham Dolan

Gazed at admiringly by his assistant Thomas Weston, Flamsteed, is shown with his principal observing instrument and an eclipse diagram marked Apr. 22 1715. This wasn’t Flamsteed getting his prediction wrong, but represents the date of the eclipse by the Old Style calendar (used before the 1752 adoption of the Gregorian calendar). The ceiling, commissioned in 1707 and finished in 1714, shows Flamsteed was determined to state his claim to understanding the Moon, through observations made at Greenwich.

Flamsteed’s lunar tables were later used by William Whiston and, corrected with Newtonian theory, used to produce another predictive eclipse map, also published by Senex in March 1715. Whiston’s text was more technical than Halley’s and his map less immediately appealing to “The Inquisitive” he called on to help observe, but he seems to have got there first (and twice).

While the eclipse was used by Flamsteed to make a statement about his authority and understanding, so recently seriously challenged, Halley and Whiston were alive to its commercial potential. Whiston, in particular, having been forced out of the Lucasian Professorship because of his unorthodox religious views, was in London on the look out for ways to make use of his skills, by publishing, lecturing, selling instruments (his map advertised “The Copernicus, or Universal Astronomical Instrument” on sale at his house in Hatton Garden) and proposing schemes. One proposal, of 1714, was to reward individuals who could solve the problem of finding longitude at sea. Whiston later noted that his sales and lectures around the eclipse earned him £120.

The improvement of lunar theory had, in fact, been almost entirely driven by the hope of providing a solution to longitude. However, it also presented a propaganda coup for the new science and a not insignificant bit of cash for some of its promoters.