This Election Has Deepened the Psychological Break Over Scotland

The union is safe, for now, but Scottish National Party’s new position in Westminster could mean the beginning of the end of the United Kingdom as we know it 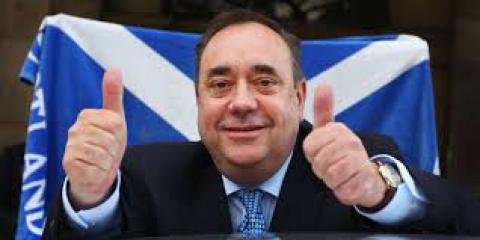 Once upon a time the SNP had a simple policy on independence: if it won a majority of Scottish seats in elections to the House of Commons or a devolved parliament in Edinburgh then that, it argued, would constitute a “mandate” to start negotiations. If that were still party policy today, then the party would now possess not one, but two such mandates.

How times have changed. Last night, as she watched the party she leads win seat after seat, Nicola Sturgeon repeated again and again that even if the SNP won every seat in Scotland, it wouldn’t represent a mandate for another independence referendum. Only if the party secured an overall majority at next year’s Holyrood elections, she added, would that be back on the agenda.

Election 2015 live: results day – as it happened
Shock results deliver Tories overall Commons majority and claim leadership scalps of Ed Miliband, Nick Clegg and Nigel Farage
Read more
So the union is safe, for now, but it goes without saying that if parties of the union lose support – as they all have in Scotland – then so does the union. And from the SNP’s point of view, several bogeymen remain in place: a Tory government, more austerity, renewal of Trident and the heightened prospect of an in/out EU referendum. As a result, winning another Holyrood majority next year will most likely be a walk in the park, especially for a campaigner as talented as Sturgeon.

But the first minister is a cautious operator, and she’ll only push for another plebiscite when polls show 60% or more supporting independence. But the point is that a Tory-led government makes that much more likely. And if Scotland votes to stay in the EU and the rest of the UK votes to go out (certainly not a given), it’ll be game on. Given last year’s precedent, Westminster would find it virtually impossible to withhold its consent.

In the interim the SNP’s 56 MPs will doubtless create a lot of noise while occupying the moral high ground, but to have any real “influence” at Westminster they’ll need to be prepared to vote with the Conservatives at some point, and Sturgeon has made it crystal clear that will never happen. There is an historical precedent: for decades the Irish Parliamentary party sent dozens of MPs to London, but beyond keeping home rule on the agenda their impact was minimal.

How David Cameron responds, meanwhile, will be key. A few hours ago he renewed his union vows, a little disingenuous given his cynical (but successful) election strategy, speaking of reclaiming the “one nation” mantle, but it seems unlikely any offer will go beyond the recent recommendations of the Smith commission. The trouble is, Smith hasn’t just been overtaken by events – it has been consumed, chewed up and spat out by them.

A cynical strategy would be to call the SNP’s bluff and offer them the “full fiscal responsibility” they claim to desire. Last night Alex Salmond, now destined to be de facto SNP leader at Westminster, said “let’s see” when asked about such a Tory response, but he should be careful what he wishes for: full control of tax and spending would, at least initially, leave the Scottish government dealing with a massive hole in its budget.

Does the prime minister have it in him to make another “big, open and comprehensive offer”, ie a federal UK? Boris Johnson appears to have flown a federalist kite, but in truth the “f” word remains just that, a word, certainly not a detailed constitutional plan. At the end of the last parliament William Hague did not rule out a constitutional convention, and it remains the obvious way to proceed – but it has to include the SNP if it’s to have any chance of success. “English votes for English laws”, meanwhile, will have its day, although it would make much more sense as part of a more holistic settlement.

But it may already be too late; the psychological break represented by last year’s referendum has now deepened, perhaps irrevocably. And whereas before the SNP owed some of its success to unionist votes – Scots who didn’t want independence but liked Alex Salmond “standing up for Scotland” – now the correlation between those supporting the SNP and independence is much stronger.

Almost exactly 60 years now separate “unionist Scotland” from “nationalist Scotland”. At the May 1955 general election the Scottish Unionist party (as the Conservatives were then known north of the border) won a majority of Scotland’s constituencies and its popular vote, and yesterday the SNP matched that twin feat – overwhelmingly so in terms of seats. Seventy years ago today the United Kingdom was celebrating its finest hour. This election result might end up being viewed as the beginning of its end.

David Torrance is author of The Battle for Britain: Scotland and the Independence Referendum, and Nicola Sturgeon: A Political Life.