labor Just a whisper Now: a Look Back at the AFL-CIO New Voice After 20 Years

The New Voice wasn’t just about growth, it envisioned a labor movement that reclaimed its place as a powerful force for justice in the community and strongly allied with the country’s progressive intelligentsia. But organizing was the magic word.

May 8, 2015 Peter Olney and Rand Wilson Stansbury Forum
Printer friendly
Just a whisper Now: a Look Back at the AFL-CIO New Voice After 20 Years Published May 8, 2015 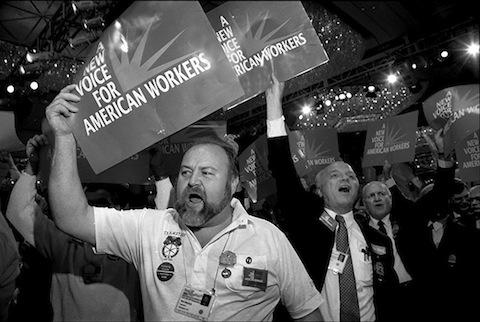 In November 2014, Teamsters Local 25 succeeded in uniting more than 1,500 parking lot attendants in Boston. As reported by the Boston Globe, the workers were almost all immigrants, many from Africa. As organizers, we believe that when thousands of immigrant workers win collective bargaining rights and rise out of the lowest tier of the working class it’s important news. Yet their organizing victory was virtually unknown to most of Boston’s labor community because it was quietly brought about over several years of patient organizing. It was not part of the “Fight for $15″ or the OUR Wal-Mart mobilizations, and had none of the bold, public ambition of organizing millions of fast food workers or the 1.3 million workers employed by Wal-Mart.(1)

The parking lot attendants’ victory — and hundreds of similar organizing and collective bargaining achievements — are too often ignored by pundits, academic observers and labor movement insiders. Their mantra seems to be that with membership plummeting in both the private and public sectors labor faces “an existential crisis” and needs “bold new approaches and initiatives.”(2)

However, the “crisis” is hardly new. Twenty years ago, in 1995, labor was also in crisis. In 1994, Newt Gingrich had led the Republicans to victory and seized control of the House of Representatives, just two years into Bill Clinton’s first term. Even sleepy old Vice Presidents of the AFL-CIO woke up in the Executive Council meeting to ask long-time President Lane Kirkland, “What’s going on?”

Then as now, labor was indeed in crisis. Union density was lower than any time in the postwar period at 17 percent and Gingrich’s “Take Back America” movement meant that the AFL-CIO’s political program was stymied.

What was to be done? Kirkland was increasingly seen by union leaders as having no answers. Rank and file local union leaders were openly restless. National union leaders were worried too, and for the first time since the formation of the AFL-CIO in 1955, an active challenge to the incumbent president was launched, led by the Service Employees International Union (SEIU) and the Teamsters.

Teamsters?? Weren’t they on the cutting edge of the Cosa Nostra, not the labor movement? The union that always endorses Republicans? Those stodgy old, mobbed up Teamsters weren’t so stodgy anymore. In 1991, Ron Carey, a reformer from the big New York City UPS local, joined a slate led by Teamsters for a Democratic Union (TDU) reformers and beat a divided old guard in the first one member, one vote election. At his January 1992 inauguration as new International President at the Teamster’s “marble palace” in Washington DC, he was surrounded by newly elected Teamster leaders, progressives from throughout the labor movement, and hundreds of long time, dedicated TDUers. Overnight the Teamsters went from reactionary to the leading edge of the labor movement. The Carey election was the “game changer” for the restless forces growing in opposition to Lane Kirkland and his chosen successor, Tom Donahue.

Hope — and the promise of significant change — was in the air. A year earlier, the Justice for Janitors blockade of the 14th Street Bridge in Washington, DC became the revitalizing metaphor for the New Voice movement. A movement that envisioned a more active “street heat” unionism, mobilizing at the grassroots to organize the millions necessary to return labor to its 35 percent postwar membership in the private sector.(3)

The New Voice wasn’t just about growth, it envisioned a labor movement that reclaimed its place as a powerful force for justice in the community and strongly allied with the country’s progressive intelligentsia. But organizing was the magic word.

SEIU President John Sweeney, at the time head of the most aggressive and successful organizing union in the country was the consensus choice to lead the New Voice slate. The Teamster reformers infused the coalition with enough votes to make the election a foregone conclusion in November of 1995.

After the votes were counted, over 500 organizers (many of them old comrades and student radicals from the New Left who had cast their lot with labor) celebrated in a raucous dancing and drinking party that lasted until the wee hours. A sense of promise and rebirth was in the air. As the refrain from the labor anthem, Solidarity Forever goes, “We would bring to birth a new world from the ashes of the old!”

After the party was over, it was time to get to the task of organizing millions of new members. To its enduring credit the New Voice program highlighted many of the elements necessary to launch successful large scale organizing. To re-energize support for organizing and collective bargaining with members and leaders, the New Voice launched an ambitious agenda to:

• Engage community and civil rights groups, academics and intellectuals to support organizing, collective bargaining and the mission of the labor movement(7)

• Launch a broad “America Needs a Raise” campaign to raise wages for all workers.(13)

Then as now, a very ambitious program. Using the Stansbury Forum, the authors plan to provide a “look back” at the New Voice program on its twentieth anniversary. We want to ask what was accomplished and what went wrong? What were the obstacles and impediments to progress?

Finally, what have we learned from the New Voice experience and what lessons from those twenty years can be applied to the “crisis” today(14).

While many well-meaning progressives repeatedly say “we can’t organize,” “we can’t strike,” and “we can’t win”; they haven’t convinced us. Despite the sharp attacks against organized labor, there are still over 15 million members and considerable resources. We intend our “look back” to stimulate debate and discussion on what, in concert with the remaining membership, should be done with those considerable resources going forward. We believe it is the cardinal question for union leaders, organizers and labor activists today.

Footnotes:
(1) “Boston’s parking attendants unionizing,” by Katie Johnston, Boston Globe, November 10, 2014 http://www.bostonglobe.com/business/2014/11/09/teamsters-organizing-par…
(2) “Why Workers Won’t Unite,” by Kim Phillips-Fein, The Atlantic, March 16, 2015
http://www.theatlantic.com/magazine/archive/2015/04/why-workers-wont-un…
Phillips-Fein writes, “Labor has grown so weak by now that whatever form of organizing might come next will have to start almost from scratch anyway, to build something entirely new… What that something might be—what it will look like, and how it might help us remake our society together—is an unavoidable question of the 21st century.”
(3) “Justice For Janitors: A look back and a look forward: 24 years of organizing janitors,” http://www.seiu.org/a/justice-for-janitors/justice-for-janitors-20-year…
(4) In April of 1997, the International Longshore and Warehouse Union (ILWU), at its International Convention in Honolulu adopted a resolution mandating that the union would spend 30% of its budget on organizing. This was a direct result of the New Voice program.
(5) Spurred by the Bay Area Labor Immigrant Organizing Network (LION) the AFL-CIO at its convention in Los Angeles in 1999 voted to reverse its position in support of Employer Sanctions and the 1985 Immigration Reform and Control Act.
(6) This commitment was reflected in the selection of Linda Chavez Thompson of AFSCME as Executive Vice President of the Federation, the first female executive officer in the history of the AFL-CIO.
(7) Falling in Love Again? Intellectuals and the Labor Movement in Post-War America, Nelson Lichtenstein, New Labor Forum, No. 4 (Spring – Summer, 1999) http://www.jstor.org/stable/40342220
(8) Examples: AFL-CIO Capital Stewardship and Center for Strategic Research
(9) “Bargain to Organize, Organize to Bargain,” Matt Luskin, Labor Notes, September 22, 2010,
http://labornotes.org/2010/09/bargain-organize-organize-bargain and Bargain to Organize: From Boon to Embarrassment, Steve Early http://inthesetimes.com/working/entry/13710/bargain_to_organize_from_bo…
(10) McEntee said unions affiliated with the AFL-CIO began pooling resources in the 1996 election cycle and did so again for the 1998 and 2000 elections. He said that as a result, 4.8 million more union household members turned out to vote in 2000 than in 1992. Union household members represented 26 percent of the vote in 2000, up from 19 percent in 1992. He said the AFL-CIO program also resulted in 2539 union members now holding elective office and that the labor movement’s goal is now to elect 5,000 union members.
(11) “John Sweeney’s New-Old AFL-CIO,” Jane Slaughter, http://www.solidarity-us.org/node/801
(12) About the Organizing Institute
http://www.aflcio.org/Get-Involved/Become-a-Union-Organizer/Organizing-…
(13) AFL-CIO “America Needs a Raise” Campaign Builds Pressure Around Country on Minimum Wage
http://www.aflcio.org/Press-Room/Press-Releases/AFL-CIO-America-Needs-a…
(14) Richard Sullivan’s retrospective on the 15th anniversary of the AFL-CIO’s New Voice campaign in New Labor Forum (Spring 2010) titled, “Why the Labor Movement is not a Movement,” merits re-reading in the 20th anniversary year.

Peter Olney is retired Organizing Director of the ILWU. He has been a labor organizer for 40 years in Massachusetts and California. He has worked for multiple unions before landing at the ILWU in 1997. For three years he was the Associate Director of the Institute for Labor and Employment at the University of California. View all posts by Peter Olney →

Rand Wilson has worked as a union organizer and labor communicator for more than twenty five years and is  currently an organizer with SEIU Local 888 in Boston. Wilson was the founding director of Massachusetts Jobs with Justice.  Active in electoral politics, he ran for state Auditor in a campaign to win cross-endorsement (or fusion) voting reform and establish a Massachusetts Working Families Party.  He is President of the Center for Labor Education and Research, and is on the board of directors of the ICA Group, the Local Enterprise Assistance Fund and the Center for the Study of Public Policy. View all posts by Rand Wilson →