Eyewitness to the ‘Fall’ of Vietnam: It Was Not a Bloodbath

Claudia Krich, longtime Davis resident and retired teacher, attended a Sacramento screening of the documentary “Last Days in Vietnam” and was moved to write this essay. The documentary rekindled memories of the unique experience she and her husband Keith Brinton shared from 1973 until July of 1975,when they co-directed a civilian rehabilitation program and hosted visiting journalists and officials near My Lai. They stayed in Saigon and saw what happened April 30th. 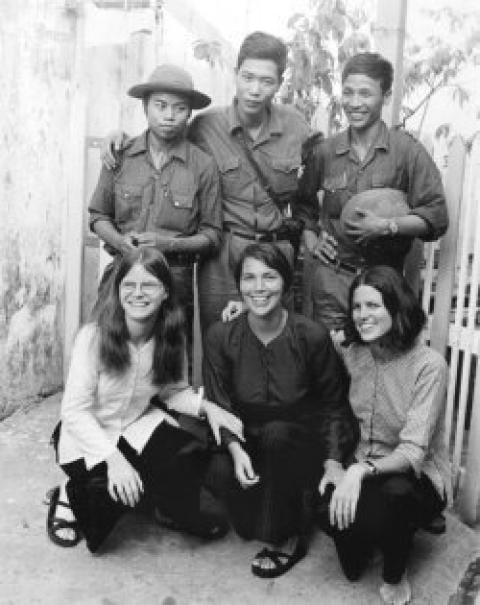 Claudia Krich, kneeling at left, is one of three American women and 12 Americans altogether who stayed in Vietnam after the fall of Saigon on April 30, 1975. Here, they pose with three North Vietnamese soldiers who were eager to have their photo taken wit, Claudia Krich/Courtesy photo // The Davis Enterprise

The assumption has been that after the Americans left, there was a terrible bloodbath in Vietnam, but history should get both sides of this story correct, now, 40 years later. There was no bloodbath.

I was one of a handful of Americans who stayed in Saigon while the rest were fleeing and helping panicked Vietnamese friends and staff do the same at the end of April 1975.  The propaganda had been extensive and effective in Saigon that the conquering North Vietnamese and National Liberation Front soldiers would maim, murder, mutilate and destroy. But they didn’t.

I had been in Vietnam two years already, and stayed in Saigon until July 1975, thus witnessing first-hand the change of power and the first few months after the American-supported South Vietnamese yielded full power to the National Liberation Front and the North Vietnamese, (also called simply the Vietnamese).

We lived in Quang Ngai, a poor town near My Lai in central Vietnam, where we directed a civilian rehabilitation program and hosted visiting journalists and officials. During the time we lived there, the area was controlled by the South Vietnamese during the day, and by the Liberation Front (locals against the Americans and South Vietnamese) during the night.

We decided not to leave, and to see the change in Saigon for ourselves. So when the Americans were putting people on helicopters at the embassy, we stayed.

Of course, there was danger. It was a war. There were bombs, rockets, artillery and random rifle fire by scared soldiers in the last days. America also was testing other less conventional weapons until the very end.

A few weeks before the end of the war, the South Vietnamese dropped an American CBU 55 bomb on civilian Vietnamese, killing everyone and every creature in range that breathed oxygen. The United States also tested agent orange and white phosphorus on the Vietnamese population.

We dropped carpet bombs and cluster bombs and, of course, planted hundreds of thousands of land mines. And there was the C5A aircraft that was packed with children, but unbalanced, that crashed in mid-April 1975, killing 138 people.

Saigon’s population had been mostly shielded from the war until the end, while those who lived outside the city suffered for years and years. In April 1975, the danger and the war reached Saigon and the residents panicked.

They all spoke the same language, of course. In fact, many families that had been split between the north and the south met again in those first few days, after decades apart. The soldiers met each other, took pictures, and shared stories.

We spent the next few months being taken for Russians as we lived normal lives in Saigon. We observed the new government organizing to recover from war; improve general health care, housing and education; increase access to water and electricity; and “re-educate” the South Vietnamese high-level government officials who were still there.

But there were no firing squads; there was no murder, no torture. The new government was committed to reconciliation as the only way to unite the country and make progress.

Of course, many Vietnamese fled then and in later years. The money-poor new government immediately had to deal with a large number of refugees streaming in from Cambodia where the Khmer Rouge had taken over. They had to deal with antagonism and fighting with China, and they had to be careful in their relationship with Russia not to alienate others.

The United States embargo caused tremendous suffering. Vietnam, once a major rice producer, had needed to import rice during the war due to the destruction of rice fields. It took a lot of time and a lot of land-mine removal before they could return to growing their own rice.

It is true that rich Saigonese lost most of their wealth. Much of that wealth had been acquired during the American war and through contacts with Americans. The post-war effort tried to reconstruct the country and to redistribute wealth.

But the new government tried to avoid retribution and there was no killing of enemies. They even wanted to be friends with America, despite the long, deadly war.

And we have moved on to other wars.

Claudia Krich is a longtime Davis resident and retired teacher.