B. B. King, Defining Bluesman

“I wanted to connect my guitar to human emotions,” Mr. King said in his autobiography, “Blues All Around Me.” Many of the songs he sang — like his biggest hit, “The Thrill Is Gone” (“I’ll still live on/But so lonely I’ll be”) — were poems of pain and perseverance. 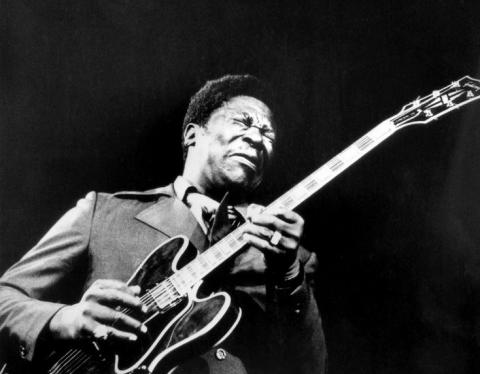 B. B. King, whose world-weary voice and wailing guitar lifted him from the cotton fields of Mississippi to a global stage and the apex of American blues, died on Thursday at his home in Las Vegas. He was 89.

John Fudenberg, the coroner of Clark County, Nev., said the cause was a series of small strokes attributable to Type 2 diabetes, The Associated Press reported. Mr. King, who was in hospice care, had been in poor health but had continued to perform until October, when he canceled a tour, citing dehydration and exhaustion stemming from the diabetes.

Mr. King married country blues to big-city rhythms and created a sound instantly recognizable to millions: a stinging guitar with a shimmering vibrato, notes that coiled and leapt like an animal, and a voice that groaned and bent with the weight of lust, longing and lost love.

“I wanted to connect my guitar to human emotions,” Mr. King said in his autobiography, “Blues All Around Me” (1996), written with David Ritz.

In performances, his singing and his solos flowed into each other as he wrung notes from the neck of his guitar, vibrating his hand as if it were wounded, his face a mask of suffering. Many of the songs he sang — like his biggest hit, “The Thrill Is Gone” (“I’ll still live on/But so lonely I’ll be”) — were poems of pain and perseverance.

The music historian Peter Guralnick once noted that Mr. King helped expand the audience for the blues through “the urbanity of his playing, the absorption of a multiplicity of influences, not simply from the blues, along with a graciousness of manner and willingness to adapt to new audiences and give them something they were able to respond to.”

B. B. stood for Blues Boy, a name he took with his first taste of fame in the 1940s. His peers were bluesmen like Muddy Waters and Howlin’ Wolf, whose nicknames fit their hard-bitten lives. But he was born a King, albeit in a shack surrounded by dirt-poor sharecroppers and wealthy landowners.

Mr. King went out on the road and never came back after one of his first recordings reached the top of the rhythm-and-blues charts in 1951. He began in juke joints, country dance halls and ghetto nightclubs, playing 342 one-night stands in 1956 and 200 to 300 shows a year for a half-century thereafter, rising to concert halls, casino main stages and international acclaim.

He was embraced by rock ’n’ roll fans of the 1960s and ’70s, who remained loyal as they grew older together. His playing influenced many of the most successful rock guitarists of the era, including Eric Clapton and Jimi Hendrix.

Mr. King considered a 1968 performance at the Fillmore West, the San Francisco rock palace, to have been the moment of his commercial breakthrough, he told a public-television interviewer in 2003. A few years earlier, he recalled, an M.C. in an elegant Chicago club had introduced him thus: “O.K., folks, time to pull out your chitlin’s and your collard greens, your pigs’ feet and your watermelons, because here is B. B. King.” It had infuriated him.

When he saw “longhaired white people” lining up outside the Fillmore, he said, he told his road manager, “I think they booked us in the wrong place.” Then the promoter Bill Graham introduced him to the sold-out crowd: “Ladies and gentlemen, I bring you the chairman of the board, B. B. King.”

“Everybody stood up, and I cried,” Mr. King said. “That was the beginning of it.”

By his 80th birthday he was a millionaire many times over. He owned a mansion in Las Vegas, a closet full of embroidered tuxedos and smoking jackets, a chain of nightclubs bearing his name (including a popular room on West 42nd Street in Manhattan) and the personal and professional satisfaction of having endured.

Through it all he remained with the great love of his life, his guitar. He told the tale a thousand times: He was playing a dance hall in Twist, Ark., in the early 1950s when two men got into a fight and knocked over a kerosene stove. Mr. King fled the fire — and then remembered his $30 guitar. He ran into the burning building to rescue it.

He learned thereafter that the fight had been about a woman named Lucille. For the rest of his life, Mr. King addressed his guitars — big Gibsons, curved like a woman’s hips — as Lucille.

He married twice, unsuccessfully, and was legally single from 1966 onward; by his own account he fathered 15 children with 15 women. But a Lucille was always at his side.

Riley B. King (the middle initial apparently did not stand for anything) was born on Sept. 16, 1925, to Albert and Nora Ella King, sharecroppers in Berclair, Miss., a hamlet outside the small town of Itta Bena in the Mississippi Delta. His memories of the Depression included the sound of sanctified gospel music, the scratch of 78 r.p.m. blues records, the sweat of dawn-to-dusk work and the sight of a black man lynched by a white mob.

By early 1940 Mr. King’s mother was dead and his father was gone. He was 14 and on his own, “sharecropping an acre of cotton, living on a borrowed allowance of $2.50 a month,” wrote Dick Waterman, a blues scholar. “When the crop was harvested, Riley ended his first year of independence owing his landlord $7.54.”

In November 1941 came a revelation: “King Biscuit Time” went on the air, broadcasting on KFFA, a radio station in Helena, Ark. It was the first radio show to feature the Mississippi Delta blues, and young Riley King heard it on his lunch break at the plantation. A largely self-taught guitarist, he now knew what he wanted to be when he grew up: a musician on the air.

The King Biscuit show featured Rice Miller, a primeval bluesman and one of two performers who worked under the name Sonny Boy Williamson. After serving in the Army and marrying his first wife, Martha Denton, Mr. King, then 22, went to seek him out in Memphis, looking for work. Memphis and its musical hub, Beale Street, lay 130 miles north of his birthplace, and it looked like a world capital to him.

Mr. Miller had two performances booked that night, one in Memphis and one in Mississippi. He handed the lower-paying nightclub job to Mr. King. It paid $12.50.

Mr. King was making about $5 a day on the plantation. He never returned to his tractor.

He was a hit, and quickly became a popular disc jockey playing the blues on a Memphis radio station, WDIA. “Before Memphis,” he wrote in his autobiography, “I never even owned a record player. Now I was sitting in a room with a thousand records and the ability to play them whenever I wanted. I was the kid in the candy store, able to eat it all. I gorged myself.”

Memphis had heard five decades of the blues: country sounds from the Delta, barrelhouse boogie-woogie, jumps and shuffles and gospel shouts. Mr. King made it all his own. From records he absorbed the big-band sounds of Count Basie, the rollicking jump blues of Louis Jordan, the electric-guitar styles of the jazzman Charlie Christian and the bluesman T-Bone Walker.

He began a tour of the biggest stages a bluesman could play: the Apollo Theater in Harlem, the Howard Theater in Washington, the Royal Theater in Baltimore. By the time his wife divorced him after eight years, he was playing 275 one-night stands a year on the so-called chitlin’ circuit.

There were hard times when the blues fell out of fashion with young black audiences in the early 1960s. Mr. King never forgot being booed at the Royal by teenagers who cheered the sweeter sounds of Sam Cooke.

“They didn’t know about the blues,” he said 40 years after the fact. “They had been taught that the blues was the bottom of the totem pole, done by slaves, and they didn’t want to think along those lines.”

Mr. King’s second marriage, to Sue Hall, also lasted eight years, ending in divorce in 1966. He responded in 1969 with his best-known recording, “The Thrill Is Gone,” a minor-key blues about having loved and lost. It was originally recorded in 1951 by Roy Hawkins, one of its writers, but Mr. King made it his own.

Mr. King is survived by 11 children. Three of them had recently petitioned to take over his affairs, asserting that Mr. King’s manager, Laverne Toney, was taking advantage of him. A Las Vegas judge rejected their petition this month.

The success of “The Thrill Is Gone” coincided with a surge in the popularity of the blues with a young white audience. Mr. King began playing folk festivals and college auditoriums, rock shows and resort clubs, and appearing on “The Tonight Show.”

Though he never had another hit that big, he had more than four decades of the road before him. He eventually played the world — Russia and China as well as Europe and Japan. His schedule around his 81st birthday, in September 2006, included nine cities over two weeks in Denmark, Belgium, the Netherlands, Germany, France and Luxembourg.

In addition to winning 15 Grammy Awards (including a lifetime achievement award), having a star on Hollywood Boulevard and being inducted in both the Rock and Roll and Blues Halls of Fame, Mr. King was among the recipients of Kennedy Center Honors in 1995 and was given the Presidential Medal of Freedom in 2006, awards rarely associated with the blues. In 1999, in a public conversation with William Ferris, chairman of the National Endowment for the Humanities, Mr. King recounted how he came to sing the blues.

“Growing up on the plantation there in Mississippi, I would work Monday through Saturday noon,” he said. “I’d go to town on Saturday afternoons, sit on the street corner, and I’d sing and play.

“I’d have me a hat or box or something in front of me. People that would request a gospel song would always be very polite to me, and they’d say: ‘Son, you’re mighty good. Keep it up. You’re going to be great one day.’ But they never put anything in the hat.

“But people that would ask me to sing a blues song would always tip me and maybe give me a beer. They always would do something of that kind. Sometimes I’d make 50 or 60 dollars one Saturday afternoon. Now you know why I’m a blues singer.”