Qatar will host the 2022 Soccer World Cup, and this week the International Trade Union Confederation, Play Fair Qatar, and NewFifaNow launched a campaign to force sponsors of the Fédération Internationale de Football (FIFA) to demand a change in the slave-like conditions endured by migrant laborers building Qatar’s tournament infrastructure. According to Play Fair Qatar, “As things stand, more than 62 workers will die for each game played during the 2022 tournament.” 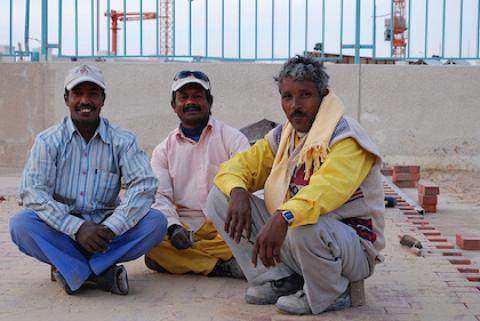 There are close to one million migrant workers in Qatar, mainly from South Asia. The majority works in construction., WBUR Boston

Clearly there must be a magic number of slave deaths in the world’s richest country that would render the Qatar World Cup a moral and political no-no. But what is that number? What is the ballpark figure where deaths in the construction of ballparks become unacceptable?

The question is not believed to be keeping Sepp Blatter awake at night. Something tells me the Fifa president sleeps the bewilderingly untroubled sleep that only a certain stripe of western leader enjoys. (Do recall that Tony Blair actually had to be woken up to be told the bombing of Baghdad he had co-ordered was soon to begin.)

Fifa’s sponsors, though, are deemed more reachable. This week has seen the launch of a campaign by the International Trade Union Confederation, Play Fair Qatar and the NewFifaNow group to shame them with the appalling conditions endured by labourers building tournament infrastructure for 2022. “As things stand,” declares Play Fair Qatar, “more than 62 workers will die for each game played during the 2022 tournament.”

To repeat: more than 62 per game. Perhaps players in every match could each wear 62 black armbands. Then again, that would probably contravene Fifa’s strict rules on what constitutes official kit, infringements of which it punishes ferociously. On infringements such as mass slave death, however, the evidence suggests it is more relaxed.

But that’s Blatter for you. When he talks about football, you never really know which version of the game is going to turn up. Either it is the super-powered version, able to heal the planet. Or it’s just a lil ol’ sport, doing its best to get by in a world of forces beyond its control. By way of an example of the former, Blatter was recently fluffing another dictatorship. “Honoured to meet the King and the PM of Bahrain,” he tweeted. “Very encouraged by their support of the role football can play to bring peace to the region.” To which the only possible response is: good luck with that, football! What are you going to do about Islamic State? Catch it in the offside trap?

Alongside such arrant cobblers runs a whole series of Fifa initiatives designed to reinforce the idea that it is Earth’s most effectively exercised soft power. Take the Football for Hope programme, where it makes participating delegations play in a tournament without referees. “Any disagreements on the pitch will be resolved through dialogue,” insists a piece of fatuous Fifa gesture politics, “a method proven to encourage personal development and mutual understanding”.

Maybe it could redeploy the spare match officials to stand on Qatar construction sites and raise their flags every time something looks a bit off. “Referee! This 27-year-old indentured Nepali has just DIED OF HEART FAILURE, along with 300 of his countrymen. Can we get a decision here?”

Typically, this would be the sort of moment that Blatter reflexively switches to that second view of football – or rather Fifa – as an essentially powerless entity. Companies “are responsible for their workers”, he has said on the ongoing Qatar disgrace, “not Fifa”.

His hands are tied, you see – except of course, they aren’t. We all know Fifa could change the lives of the World Cup labourers at a stroke by threatening to deprive Qatar of its precious tournament. It goes without saying that the Qatar government is capable of working within humane labour laws: it certainly manages it in all the bits of London it has bought.

But neither wants to. Which brings us to the other strand of this week’s Qatar news: the detention of the BBC crew who attempted to film the labour villages and were detained by Qatari police who warned: “This is not Disneyland.” Honey, even Disneyland isn’t Disneyland, as all manner of exposés of life at the House of Mouse will attest. But at least it isn’t a slave-labour state where survival is a bonus.

Perhaps most telling is Qatar’s official statement offered on the BBC crew’s arrest, which begins: “The government communications office invited a dozen reporters to see – first-hand – some substandard labour accommodation as well as some of the newer labour villages.”

Isn’t there something sociopathic about that “substandard”? Who on earth arranges official tours to “substandard” venues, if they are the very people who could improve them? When human living conditions are demonstrably substandard, you would hope the priority would be to fix them, as opposed to inviting overseas media to fly over at an appointed date, then waiting for that date, then escorting the travelling party there and trilling something along the lines of: “We’re totally going to get these guys sanitation at some point, but we just wanted to show you their substandard lack of it first. Anyhoo, have a quick look round their hovel, and then we must be getting back on the bus in order to make cocktails on the 170th floor of the Diamond Penis building.” Shame on the BBC for suspecting there may be a standard that is sub the official version of substandard.

As for where we go from here, identifying that magic number is becoming increasingly unavoidable. For what little it’s worth, I am in favour of sporting boycotts only in extremis, and never envy those administrators charged with making such incredibly difficult decisions. But if 62 poverty-stricken deaths per game in the richest country in the world doesn’t count as extremis, then our own FA will eventually have to tell us what does.

[Marina Hyde is a Guardian columnist.]