Inflation, devaluation of the local currency and falling oil prices have marked the Venezuelan economy in recent years. To better understand the situation, Granma interviewed Alfredo Serrano Mancilla, PhD Economist, director of the Latin American Strategic Center of Geopolitics (CELAG), and author of the book, The Economic Thought of Hugo Chávez. 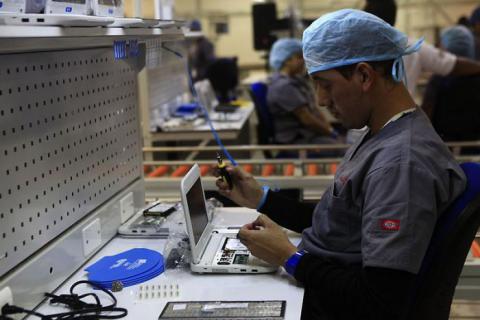 Promoting new industry, such as the Canaimas educational laptop assembly plant, is one of the objectives of the Venezuelan economic model., VTV // Granma

Escalating inflation, devaluation of the local currency and falling oil prices on the world market, have marked the Venezuelan economy in recent years.

While the country's progress in the social sphere cannot be debated, unleashing the full economic potential of this South American nation, extremely rich in natural resources, remains a challenge, as it has fallen into the curse of relying on a single product: oil.

Critics of the process initiated by Hugo Chávez in 1999, attribute the failure to solve the economic problems of a country with the largest proven oil reserves in the world to the inefficiencies of the Executive, currently led by Nicolás Maduro.

However, many analysts neglect to mention the veritable economic war that the country has experienced since the arrival of Chávez to the Miraflores presidential palace, which has only intensified since his death.

To help understand the situation, Granma interviewed Alfredo Serrano Mancilla, PhD Economist, director of the Latin American Strategic Centre of Geopolitics (CELAG), and author of the book, The Economic Thought of Hugo Chávez.

What are the challenges for the Venezuelan economy?

Venezuela faces major economic challenges in this new cycle, both temporary and structurally. Since the arrival of the Bolivarian Revolution led by Chávez, Venezuela has managed to build a strong "State of the (Social) Missions", with the effective capacity to virtuously meet the basic needs and fundamental social rights of the people, completely removed from the neoliberal legacy it inherited.

This State of the Missions is nonnegotiable and irreversible. Permission is not sought from transnational capital or oil prices to maintain it. That's the big difference compared with existing welfare states in other European countries.

This socialist economic model is humanistic, social and popular, and protects people's lives and their jobs. The country has also managed to reintegrate itself into the world system with more sovereignty within a short space of time, with a clear commitment to a new Bolivarian Consensus faced with the old Washington Consensus, and also enjoys summarily positive relations in this new multipolar world.

The new Bolivarian economic model has reappropriated oil revenues at source, recovering them and putting them at the service of the social majority. And now, in the next decade - which we might call the new decade in dispute, following the victorious decade - the challenge is to manage, under the socialist model, the new oil revenues in the hands of the Venezuelan people and the state.

"This requires addressing the rentierism of the 21st century which affects Venezuela and other Latin American countries and is largely the mechanism used by an importing bourgeoisie to wage an economic war against the Venezuelan people, with inflation and artificial shortages.

That is the great challenge of the socialist economic model: to replace this social metabolism of capital which still has prominence in the functioning of the Venezuelan economy.

This can only be achieved with a new production model that promotes basic goods and other commodities in high demand by Venezuelans. Consumption patterns were democratized and now the productive apparatus needs to be democratized. This is key: to produce new goods but also with new producers and new forms of production to prevent this metabolism of capital.

This is the key to dealing with the most pressing needs at hand, but also to moving forward irreversibly on the path of structural change towards a Bolivarian socialist model of the 21st century.

Undoubtedly, it is also necessary to confront the importer challenge in terms of goods that still can not be domestically produced, by way of a public importing agency to break the market power of the importing bourgeoisie.

Can Venezuela move away from this oil dependency? How?

The objective for the moment is not to leave behind this oil dependence but rather to use oil revenues to build foundations for the long term, so as to have other forms of economically inserting the nation into the world.

It is not an easy or immediate task especially if you consider that the social debt inherited from neoliberalism required that a great deal of oil revenue be spent in order that Venezuelans could enjoy education, health, decent housing, etc.

Therefore, the first thing was to reappropriate oil revenues and devote them to the people, and the next was to find the means to depend less and less on them. Therefore, the great productive revolution is key to this task, leaving behind the subservience to the oil sector depends on this.

Venezuela has great potentialities on which to build the productive economic model in the coming years. In this regard, it is important to consider the strength and multiplicative capability of all public purchases that the Venezuelan state undertakes today. For example, about 10% of GDP is generated by the state just through its public procurement policies; this is an opportunity to reinvigorate economic activity within the country. Here the domestic market is a guarantee that should be taken advantage of to move away from oil dependence to a certain extent in the medium term."

Were the social policies implemented by the Bolivarian Revolution linked to economic growth?

In Venezuela social policies form part of a new concept of the state: the State of the Missions that guarantees social rights for all Venezuelans, without exclusions. This new way of tackling social policy via the State of the Missions does not depend on economic growth. This was demonstrated in 2014, as despite the fall in GDP, social policies went ahead. Something similar happened in 2009. The Bolivarian Revolution has shown that social rights can not be dependent on the rate of economic growth.

Indeed, this relationship between social policy and economic growth must be considered the other way round, that is, the State of the Missions has to serve as an engine for economic growth."

To what extent does the economic war faced by the Executive influence on this and other sectors?

The economic war is a reality, both politically and economically. After more than 15 years of Bolivarian Revolution, the opposition has failed to find the political and electoral means to win power. The candidates of the former "partidocracy" could not come out on top. Not even with Capriles, a sort of seemingly neutral candidate, or by avoiding too much confrontation, assuming that common sense derives from a new political camp removed from neoliberalism. They have failed to convince the social majority of another political and economic model.

In such a scenario, the economic war is an effective way to seek to erode the revolutionary process, and this is implemented by economic and political, national and international actors, taking advantage of a social metabolism of capital that doesn't just disappear. Indeed, the rentierism of the 21st century is an economic mechanism used by the bourgeoisie to conduct an economic war via prices, shortages, etc.

Mészáros (Hungarian Marxist philosopher) warned of the presence of the post-capitalist system of capital in any process of transition to socialism. It's like a (capitalist) tenant who refuses to leave the house even though it has been organized in a socialist form because that is what the majority of people have decided. The capitalist tenant relocates, readjusts, and now he's looking to reappropriate the oil revenue via prices. Here is the structural key to this economic war, that clearly has specific effects that seek to destabilize, undermine and weaken the government to win in this way that which they can not by playing clean.

Venezuela has implemented a socialist system with its own policies in a capitalist society, what kind of distortions can this generate?

They are the contradictions typical of a process of change. Tensions appear as modification of an old structure toward another is accomplished. They should be regarded as such. They are the creative tensions and contradictions of any process of change and are the result of the challenge of seeking a counter-hegemonic socialist economic model in opposition to the global economic order that prevailed in Venezuela for decades.

In fact, this is another challenge for the next decade in dispute, both in Venezuela and in Latin America: to identify and overcome the contradictions and tensions that are generated in the process of change, and also those secondary aspects that arise when confronting a historic enemy that also changes (tactically and strategically).

One of the keys to this is to better characterize each historical moment, identifying new questions that arise in each process in order to find the best new answers. To continue to offer answers from the past to new questions would be a historic mistake; that is why the contradictions must be identified, assumed, and means of addressing them should be sought, always working in favor of the Latin American social majority.