If companies want to grumble about creeping socialism, they could always choose, at their own free will, that tried-and-true market-based solution to poverty wages: paying their workers enough to live on. 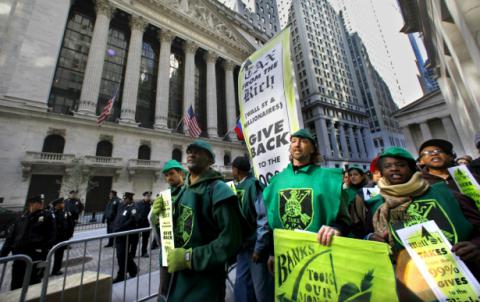 As state legislatures across the country buckle down for funding battles, sometimes it seems miraculous that they ever find enough tax revenue to fund anything: Every budget is a litany of imploding pensions, overcrowded classrooms, and dilapidated clinics—never enough money to go around. But lawmakers in Connecticut just found some in the coffers of its richest corporations.

Call it a Robin Hood Tax for big-box stores: take from the rich to give to the poor, by forcing companies that pay unlivable wages to support the public benefits that impoverished workers need to survive. According to one economic assessment, the “true cost” of low-wage jobs in Connecticut amounts to some $486 million per year paid through various public welfare programs. So the logic goes, the most heavily state-subsidized companies should pay their fair share.

The low-wage employer fee proposed in the Act Concerning the Recoupment of State Costs Attributable to Low Wage Employers, acts as a “penalty” paid by big businesses that capitalize on cheap labor with the help of government largesse: those paying less than $15 an hour, with 500 or more employees.

The targeted bosses would pay a fee proportional to the number of hours of poverty-wage labor used per quarter; companies pay the state $1 per low-wage work hour, as a sort of premium on the privilege to underpay workers. The state estimates the policy would apply to roughly 147,000 of more than 743,000 employees at the targeted companies, mostly concentrated in retail and service jobs, like big-box sales (Walmart alone employs about 9300 people statewide).

The funds would be targeted to the Departments of Social Services and Developmental Services, the Office of Early Childhood, and the Labor Department for administration.

Targeting larger corporations would meet the goals of the “Fight for $15” demand for a good chunk of the workforce, since often the lowest-paying companies are large firms. The bill also avoids the common libertarian criticisms by shielding smaller businesses with lower profit margins. Though it will certainly not eliminate low-wage jobs—nor would a $15 minimum wage, for that matter—the recapturing proposal can both support anti-poverty programs and counterbalance the trend in the post-recession “recovery” of more than 40 percent of job growth being concentrated in low-wage occupations.

Meanwhile, most of the largest low-wage employers have seen their incomes rebound lustily. And studies show that nationwide the most prominent poverty-pay companies, Walmart and fast-food chains, drain several billion dollars in taxpayer funds annually by paying workers so little, they receive benefits like food stamps, subsidized childcare and Medicaid (and as poor consumers, they feed profits further through retail sales).

In contrast to an across-the-board minimum wage hike, the boss tax attempts to redistribute wealth not through forcing employers to put more money into the lowest rungs of the private economy, but through “recapturing” the wealth in programs that support the poorest households.

And they could seriously use the money. According to the National Employment Law Project, “The proportion of young children in poverty in Connecticut grew 25 percent over the last five years,” but childcare services are unaffordable for many, as “the state’s spending on early care and education has decreased in recent years.”

As lawmakers weigh the bill, University of Connecticut researchers have mapped out the impacts on public programs, which are likely to help workers of the targeted firms. According to their projections, in a study supported by Jobs with Justice, the tax “would generate an estimated $188,592,170 in new revenue for the state,” with the knock-on effect of creating hundreds of new state jobs, to support administration of benefits.

The report maps out various scenarios for meeting the cost of the employer fee, including “reducing their profit” or “employing more automation and reducing employment.” These all have varying effects, but the researchers concluded that the greatest public benefit would come from companies bearing the full cost: that would generate “1,388 jobs, state GDP increases by $130.57 million, and net state revenue increases by $189.7 million.”

This concept of using taxation, rather than regulation of wages, as an instrument of economic redistribution, places more authority in the state, but is in some ways easier for the state to justify fiscally as a way of alleviating the conditions of income inequality: People will always need social services like education or healthcare.

The program could also perhaps spur more companies to simply pay $15 an hour to avoid the fee. That’s still a fairly low wage compared to the cost of living in many parts of Connecticut, but would significantly help prevent poor families from becoming more pressed to rely on benefits. Generally, higher incomes would also bring more tax revenue into state coffers. But under the incentive structure outlined in the legislation, Simmons says, “if employers continue to pay, and use as a business model, very low wages, then they would have to bear some of the costs of that that are passed onto the public.” Since the overall purpose is to help the workers through a better funded social-welfare state as well as higher wages, she adds, “from my standpoint, I would want to see them get either the services they need or the money they need, and ideally both.”

The policy may be criticized for grabbing hard-earned profits from corporations and shoving it into Big Government. However, one could counter-argue that the state is actually just intervening to correct a market imbalance: the ill-gotten gains of mega-companies that fail to live within their means and hoard public wealth—not just through social welfare, but also corporate tax breaks and tax-code loopholes.

And if companies want to grumble about creeping socialism, they could always choose, at their own free will, that tried-and-true market-based solution to poverty wages: paying their workers enough to live on.

Michelle Chen is a contributing editor at In These Times and associate editor at CultureStrike. She is also a co-producer of “Asia Pacific Forum” on Pacifica's WBAI and Dissent Magazine's “Belabored” podcast, and studies history at the City University of New York Graduate Center. Find her on Twitter: @meeshellchen.