"Close to half of all county expenditures were spent on just five percent of the homeless population, who came into frequent contact with police, hospitals, and other service agencies, racking up an average of $100,000 in costs per person annually." That's a ton of money. And it's why the simplest solution to ending homelessness — giving them homes — makes so much sense. 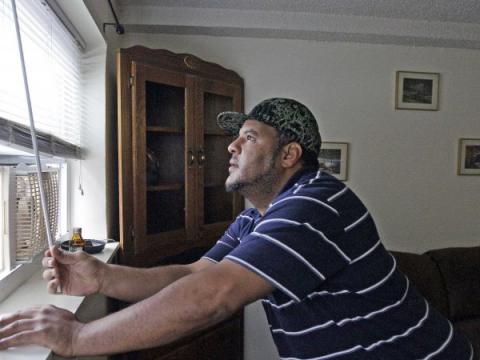 In this October 4, 2010 photo, Junior Rosario, 35, adjusts window blinds in an apartment he recently moved into in Lowell, Massachusetts, through a "Housing First" program., AP Photo/Steven Senne

The Economic Roundtable just came out with the largest study on homelessness in American history.

And it turns out the best way to combat homelessness is to provide homes.

The study's focus was on Santa Clara County, California, home to the extreme wealth of Silicon Valley and the highest percentage of homelessness in the entire US.

The methodology is enough to make a social scientist swoon: Researchers analyzed information about everyone in Santa Clara County who had been homeless between 2007 and 2012 — 104,206 people.

Between costs related to healthcare, social welfare, and the justice system, Santa Clara County as a whole spent $520 million on services for homeless residents.

Those costs didn't come from everybody who was homeless in that time period. As Gabrielle Canon at Mother Jones notes, much of those costs came from the roughly 2,800 people who were persistently homeless.

"Close to half of all county expenditures were spent on just five percent of the homeless population, who came into frequent contact with police, hospitals, and other service agencies, racking up an average of $100,000 in costs per person annually," Canon writes.

That's a ton of money.

And it's why the simplest solution to ending homelessness — giving them homes — makes so much sense.

The study detailed the efforts of the nonprofit group Destination: Home, which housed 400 of the people tracked in the report. Before they received housing, these homeless created public costs of $62,500 a year — and housing cost less than $20,000 per person.

That's more than $42,000 in savings every year, more than offsetting the costs of housing.

For that reason, the report's authors argue that the best way to work with homelessness is to identify the people who put the biggest strain on community resources and give them homes.

The strategy, known as Housing First, has a track record of success.

New York University psychologist Sam Tsemberis was the first to propose it back in 1992. He tested his theory on 242 chronically homeless people in New York City. Five years later, 88% were still living in their apartments at a lower cost to taxpayers and the state government.

The model spread to Washington, Colorado, and Massachusetts.

Most recently, it's had huge effects in Utah. Using the Housing First method, the state is projected to end chronic homelessness by the close of 2015.

What's counterintuitive about housing first is that people get to keep their homes even if they keep using drugs or alcohol. As we reported last February, this method is better at keeping people from lapsing back into homelessness than traditional housing methods, where homeless people have to lock down jobs and stay sober to keep their temporary housing.

So you could say that the Housing First method isn't just more compassionate to the people who suffer from homelessness, it's also more effective at keeping them off the streets and preventing the drain on community funds.

"If you move people into permanent supportive housing first, and then give them help, it seems to work better,” Nan Roman, the president and CEO of the National Alliance for Homelessness, told The New Yorker in September. “It's intuitive, in a way. People do better when they have stability."

Drake is the ideas editor at Business Insider, where he covers humanity's advances in understanding itself. He wrote "The Making Of Tesla: Invention, Betrayal, And The Birth Of The Roadster," a Business Insider long-form feature. He is the coauthor of "Everything Connects: How to Transform and Lead in the Age of Creativity, Innovation, and Sustainability." Previously, Drake was a contributing writer at Fast Company. Before that, he spent years traveling the world.Natasha Bertrand contributed research to this article.