With their anthology Octavia’s Brood, Adrienne Brown and Walidah Imarisha evoke a world of radical possibility. 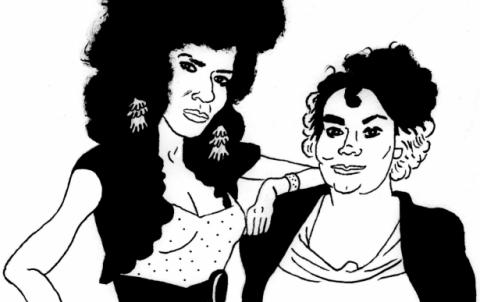 In March, I spoke with writer, organizer, and science-fiction scholar Adrienne Brown and filmmaker, poet, and prison abolitionist Walidah Imarisha about their new book, Octavia’s Brood, an anthology of radical science fiction by activist writers. This interview has been edited and condensed.

LF: Adrienne, remind us who Octavia is.

Adrienne Brown: Octavia Butler was a black science-fiction writer whose protagonists were young women of color, mostly black women. They practiced leading and changing the world in ways that most science fiction has not really played with. We were really inspired by her work, which takes on social-justice issues. Her collection Lilith’s Brood talks about this person who basically creates the next phase of humanity. It feels like Butler never wanted to be the only person doing that, so we call ourselves Octavia’s Brood.

LF: Walidah, you say that all social organizing is science fiction. What do you mean?

Walidah Imarisha: Any time we try to envision a different world—without poverty, prisons, capitalism, war—we are engaging in science fiction. When we can dream those realities together, that’s when we can begin to build them right here and now.

LF: Realism tends to occupy a higher place in the hierarchy of literature than science fiction.

WI: Absolutely. Especially among folks who are radical, progressive, left. I’ve met many people who are very proud that they only read nonfiction, and I feel very sad for them, because we have to be able to imagine something else. In science fiction, we don’t have to stay contained within what is possible. We can start with the question “What do we want?” rather than the question “What is realistic?”

LF: You dream up a fallen angel. Who is she to you?

WI: She went against God because she couldn’t stand to watch humans suffer anymore. God said, “I have a plan.” She said, “Whatever your plan is, I can’t sit by and watch this anymore.” For me, a lot of that is about questioning the idea of authority—in this case, the ultimate authority. Because of that, God ejects her from heaven and sets her on fire, throws her into the Harlem River. She ends up in Harlem and becomes a very reluctant superhero.

LF: Adrienne, your story is about Detroit, where you live. Were you able to communicate things in science fiction that you haven’t been able to in your organizing?

AB: I think so. I wanted to talk about gentrification in a different way. There’s always this question of, What would it look like if the people got to develop the community? It occurred to me that we would need some supernatural help. I’ve been obsessed with the idea of what lives in the Detroit River and making it a character. I’ve heard so many stories about people getting pushed into the river during the riots, all the runaway slaves who have crossed it, people who have committed suicide in it, accidents, burnings. What if the river had something to say, a point of view that is in touch with the emotions of the city, the grief of the city? It wouldn’t be good for those who are trying to gentrify it. It was very healing for me.

LF: Have these stories and this process given you a new vision of justice?

WI: Absolutely. I do a lot of work on prison abolition. What can justice look like outside the context of prisons and police, and really rooted in community accountability, healing, and restorative ideas of justice? Science fiction is a perfect testing ground for these issues, because the vast majority of people can’t imagine a world without prisons.

LF: I never knew that journalist and activist Mumia Abu-Jamal was a Star Trek fan. How’d you find out, Walidah?

WI: I had the honor of visiting him on death row. I made some Star Trek reference and Mumia just flowed with it—he was like, “Right? Live long and prosper.” Mumia is a nerd in all ways; he really sees the visionary realities and possibilities of science fiction. He contributed an essay on Star Wars, US imperialism, and militarism, and also recorded an audio version. It’s amazing to hear him not only give this brilliant analysis but also do a Darth Vader impression.