Two-years of campaigning, with over one million people participating, has succeeded in securing $30 million in compensation for the garment worker victims of the Rana Plaza building collapse. 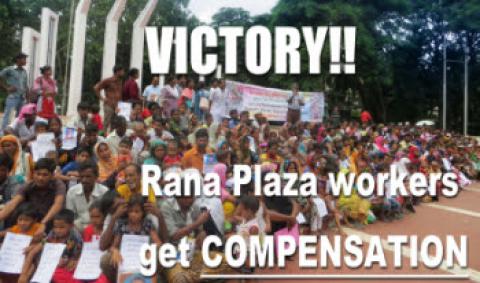 This campaign victory would not have been possible without the hard work of workers' rights groups and labor unions on the ground in Bangladesh, and activism from a wide array of allies, including Clean Clothes Campaign, United Students Against Sweatshops, and many others. Collectively more than a hundred store actions were conducted as well as demonstrations at corporate headquarters.

In the deadliest disaster in the history of the global garment industry, on April 24, 2013, Rana Plaza, an eight-story building housing five garment factories, collapsed, killing at least 1,138 people and injuring another 2,500. Bangladesh lacks a national workplace injury compensation program, and so, in the wake of the tragedy, workers’ rights advocates united in calling on the apparel brands and retailers whose clothes were produced at Rana Plaza to pay full and fair compensation to the injured survivors and the families of the deceased.

The International Labour Organization (ILO) set up the Rana Plaza Trust Fund in January 2014 to collect funds to cover loss of income and medical expenses for Rana Plaza victims and their families. In November 2014 the Rana Plaza Coordination Committee announced that it would need $30 million to pay awards to 5,000 claimants under the scheme. Today the Fund was completed with an anonymous donation filling the remaining $2.4 million gap.

The Children's Place became the third highest donor to the Trust Fund, with a contribution of $2.5 million in April.  Brave activists in Bangladesh helped uncover which apparel brands were connected to Rana Plaza.  Work continues to support the Bangladesh Center for Worker Solidarity as they document victims' experiences and identify what additional information and support they need.

Finally this basic compensation has been secured to help ease the suffering of the survivors and families who have been living in dire economic hardship. Looking ahead, we’ll call on the government of Bangladesh to establish a proper workplace injury compensation program, and urge apparel brands to factor the cost of safety into the price they pay to factories so that they are paying for the real cost of business in Bangladesh.