This Is Your Victory: Fast Track for a Bad Trade Deal Is Derailed

The “allegedly unstoppable momentum” of the pro-fast-track forces just hit the immovable object called transpartisan grassroots democracy. Now the focus will be on “permanently retiring” the fast-track trade promotion authority process, borne out of the Nixon presidency, and replace it with a more inclusive, transparent process that instead of more job-offshoring can deliver trade deals that create American jobs and raise our wages. 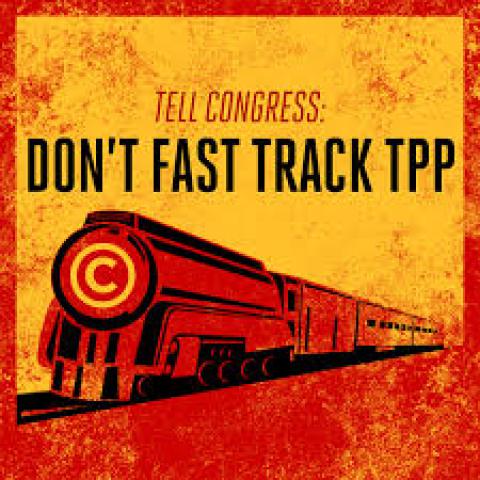 You did it. Despite furious lobbying by the Fortune 500, entreaties from the Republican leadership in Congress and personal, last-minute appeals from President Obama, fast-track trade authority for the Trans-Pacific Partnership has been thrown off-track.

A sweeping majority of Congress voted against the trade adjustment assistance bill that was a necessary part of the three-part fast-track package. With that vote going against the forces pushing fast-track, it’s back to the starting gate for getting some form of trade authority.

House Speaker Nancy Pelosi said that for her the issue is “about time. Why are we fast-tracking trade and slow walking the highway bill? It’s about time. People have not recovered from, again, 2008 sufficiently to again have consumer confidence to turn around our consumer economy. And so I think that today we have an opportunity to slow down. We all know we have to want to engage in trade promotion and the rest of that. But we have to slow down this road. … Whatever the deal is with other countries, we want a better deal for America’s workers.”

Pelosi and other Democrats also pointed out the poison pills that Republican leaders added to the trade adjustment assistance and to a third, customs enforcement bill to satisfy the anti-spending, anti-environment and anti-immigrant factions in the Republican Party. They included provisions that called for a cut in Medicare spending to “pay for” trade adjustment assistance, and language in the customs bill that would have barred trade provisions designed to limit climate change or loosen immigration restrictions.

The bottom line, according to Lori Wallach at Public Citizen’s Global Trade Watch, is that “two years of effort by a vast corporate coalition, the White House and GOP leaders – and weeks of procedural gimmicks and deals swapped for yes votes – could not assuage Americans’ concerns that more of the same trade policy would kill more jobs and push down our wages.”

The vote ended nearly two weeks of intense citizen pressure directed at Congress, including several thousand calls generated by our own click-to-call Congress site and 2 million signatures in opposition to fast track delivered to Congress by a broad coalition of organizations.

The “allegedly unstoppable momentum” of the pro-fast-track forces “just hit the immovable object called transpartisan grassroots democracy,” Wallach said in a statement. Now the focus, she said, will be on “permanently retiring” the fast-track trade promotion authority process, borne out of the Nixon presidency, and replace it with “a more inclusive, transparent process that instead of more job-offshoring can deliver trade deals that create American jobs and raise our wages.”

A statement from the Congressional Progressive Caucus noted that the trade assistance bill that want down to defeat is expected to be placed back on the floor for a second try as early as next week.

“The fight is far from over,” the statement read. “President Obama and the Republican majority will not stop pushing until they get the rubber-stamp they need to sign another bad trade deal.” But the caucus members vowed to continue to “oppose any trade deal that lowers wages, endangers our air, land and water and supports human trafficking.”

Indeed, the battle isn’t over. But you and activists across the country inundated Congress with calls, petitions and emails. You were part of the broad coalition that included environmentalists, consumer groups, labor unions, citizen action groups, poverty and civil rights groups, the faith community, seniors and many more.

Even as we stood together, few believed that we had much of a chance against the big moneyed interests lined up on the other side. We showed the power of people when they make their voice heard.

“The debate over Fast Track so far has been a marvelous contrast to the corporate money and disillusionment that normally mark American politics today,” said Richard Trumka, president of the AFL-CIO. “This was truly democracy in action – millions of people exercising their free rights to inform their elected representatives. We should all draw from this experience to help replenish our democracy at every level on every issue.

“The conversation now should turn to putting a raising wages agenda in motion,” his statement continued. “Let’s discard the old ways of arranging corporate trade entitlements, and open a path to revitalizing our economy on the basis of real growth, worker rights, higher wages, and shared prosperity.”

Isaiah Poole worked at the Campaign for America's Future. He attended Pennsylvania State University and lives in Washington, DC.