It is well enough that the people of the nation do not understand our banking and monetary system, for if they did, I believe there would be a revolution before tomorrow morning. — Attributed to Henry Ford 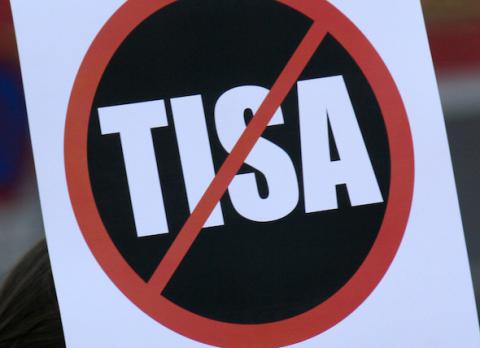 In March 2014, the Bank of England let the cat out of the bag: money is just an IOU, and the banks are rolling in it. So wrote David Graeber in The Guardian the same month, referring to a BOE paper called “Money Creation in the Modern Economy.” The paper stated outright that most common assumptions of how banking works are simply wrong. The result, said Graeber, was to throw the entire theoretical basis for austerity out of the window.

The revelation may have done more than that. The entire basis for maintaining our private extractive banking monopoly may have been thrown out the window. And that could help explain the desperate rush to “fast track” not only the Trans-Pacific Partnership (TPP) and the Trans-Atlantic Trade and Investment Partnership (TTIP), but the Trade in Services Agreement (TiSA). TiSA would nip attempts to implement public banking and other monetary reforms in the bud.

The BOE report confirmed what money reformers have been saying for decades: that banks do not act simply as intermediaries, taking in the deposits of “savers” and lending them to borrowers, keeping the spread in interest rates. Rather, banks actually create deposits when they make loans. The BOE report said that private banks now create 97 percent of the British money supply. The US money supply is created in the same way.

. . . [M]oney is really just an IOU. The role of the central bank is to preside over a legal order that effectively grants banks the exclusive right to create IOUs of a certain kind, ones that the government will recognise as legal tender by its willingness to accept them in payment of taxes. There’s really no limit on how much banks could create, provided they can find someone willing to borrow it.

Just consider what might happen if mortgage holders realised the money the bank lent them is not, really, the life savings of some thrifty pensioner, but something the bank just whisked into existence through its possession of a magic wand which we, the public, handed over to it.

If money is just an IOU, why are we delivering the exclusive power to create it to an unelected, unaccountable, non-transparent private banking monopoly? Why are we buying into the notion that the government is broke – that it must sell off public assets and slash public services in order to pay off its debts? The government could pay its debts in the same way private banks pay them, simply with accounting entries on its books. What will happen when a critical mass of the populace realizes that we’ve been vassals of a parasitic banking system based on a fraud – that we the people could be creating money as credit ourselves, through publicly-owned banks that returned the profits to the people?

Henry Ford predicted that a monetary revolution would follow. There might even be a move to nationalize the whole banking system and turn it into a public utility.

It is not hard to predict that the international bankers and related big-money interests, anticipating this move, would counter with legislation that locked the current system in place, so that there was no way to return money and banking to the service of the people – even if the current private model ended in disaster, as many pundits also predict.

And that is precisely the effect of the Trade in Services Agreement (TiSA), which was slipped into the “fast track” legislation now before Congress. It is also the effect of the bail-in policies currently being railroaded into law in the Eurozone, and of the suspicious “war on cash” seen globally; but those developments will be the subject of another article.

On June 3, 2015, WikiLeaks released 17 key documents related to TiSA, which is considered perhaps the most important of the three deals being negotiated for “fast track” trade authority. The documents were supposed to remain classified for five years after being signed, displaying a level of secrecy that outstrips even the TPP’s four-year classification.

TiSA involves 51 countries, including every advanced economy except the BRICS (Brazil, Russia, India, China, and South Africa). The deal would liberalize global trade in services covering close to 80% of the US economy, including financial services, healthcare, education, engineering, telecommunications, and many more. It would restrict how governments can manage their public laws, and it could dismantle and privatize state-owned enterprises, turning those services over to the private sector.

Recall the secret plan devised by Wall Street and U.S. Treasury officials in the 1990s to open banking to the lucrative derivatives business. To pull this off required the relaxation of banking regulations not just in the US but globally, so that money would not flee to nations with safer banking laws.  The vehicle used was the Financial Services Agreement concluded under the auspices of the World Trade Organization’s General Agreement on Trade in Services (GATS). The plan worked, and most countries were roped into this “liberalization” of their banking rules. The upshot was that the 2008 credit crisis took down not just the US economy but economies globally.

TiSA picks up where the Financial Services Agreement left off, opening yet more doors for private banks and other commercial service industries, and slamming doors on governments that might consider opening their private banking sectors to public ownership.

Blocking the Trend Toward “Remunicipalization”

In a report from Public Services International called “TISA versus Public Services: The Trade in Services Agreement and the Corporate Agenda,” Scott Sinclair and Hadrian Mertins-Kirkwood note that the already formidable challenges to safeguarding public services under GATS will be greatly exasperated by TiSA, which blocks the emerging trend to return privatized services to the public sector. Communities worldwide are reevaluating the privatization approach and “re-municipalizing” these services, following negative experiences with profit-driven models. These reversals typically occur at the municipal level, but they can also occur at the national level.

One cited example is water remunicipalization in Argentina, Canada, France, Tanzania and Malaysia, where an increasing frustration with broken promises, service cutoffs to the poor, and a lack of integrated planning by private water companies led to a public takeover of the service.

The TISA would limit and may even prohibit remunicipalization because it would prevent governments from creating or reestablishing public monopolies or similarly “uncompetitive” forms of service delivery. . . .

Like GATS Article XVI, the TISA would prohibit public monopolies and exclusive service suppliers in fully committed sectors, even on a regional or local level. Of particular concern for remunicipalization projects are the proposed “standstill” and “ratchet” provisions in TISA. The standstill clause would lock in current levels of services liberalization in each country, effectively banning any moves from a market-based to a state-based provision of public services. This clause . . . would prohibit the creation of public monopolies in sectors that are currently open to private sector competition.

Similarly, the ratchet clause would automatically lock in any future actions taken to liberalize services in a given country. . . . [I]f a government did decide to privatize a public service, that government would be unable to return to a public model at a later date.

That means we can forget about turning banking and credit services into public utilities. TiSA is a one-way street. Industries once privatized remain privatized.

The disturbing revelations concerning TiSA are yet another reason to try to block these secretive trade agreements.

Ellen Brown is an attorney, founder of the Public Banking Institute, and author of twelve books including the best-selling Web of Debt. Her latest book, The Public Bank Solution, explores successful public banking models historically and globally. Her 300+ blog articles are at EllenBrown.com.