What is Reform? The Strange Case of Greece and Europe

The specific reforms demanded by Greece's creditors today are a peculiar blend. They aim to reduce the state; in this sense they are “market-oriented”. Yet they are the furthest thing from promoting decentralization and diversity. On the contrary they work to destroy local institutions and to impose a single policy model across Europe, with Greece not at the trailing edge but actually in the vanguard. In this other sense the proposals are totalitarian . . .

June 16, 2015 James Galbraith The American Propect
Printer friendly
What is Reform? The Strange Case of Greece and Europe Published June 16, 2015 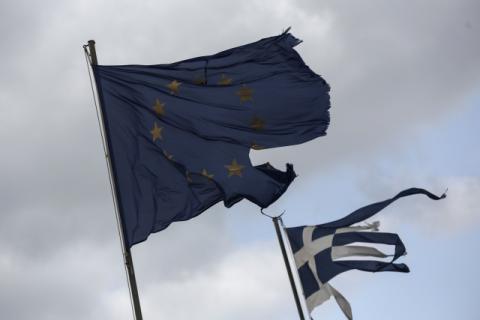 Ruined EU and Greek flags fly in tatters from a flag pole at a beach at Anavissos village, southwest of Athens, on Monday, March 16, 2015. , AP Photo/Yorgos Karahalis

On our way back from Berlin on Tuesday, Greek Finance Minister Yanis Varoufakis remarked to me that current usage of the word “reform” has its origins in the middle period of the Soviet Union, notably under Khrushchev, when modernizing academics sought to introduce elements of decentralization and market process into a sclerotic planning system. In those years when the American struggle was for rights and some young Europeans still dreamed of revolution, “reform” was not much used in the West. Today, in an odd twist of convergence, it has become the watchword of the ruling class.

The word, reform, has now become central to the tug of war between Greece and its creditors. New debt relief might be possible—but only if the Greeks agree to “reforms.” But what reforms and to what end? The press has generally tossed around the word, reform, in the Greek context, as if there were broad agreement on its meaning.

The specific reforms demanded by Greece's creditors today are a peculiar blend. They aim to reduce the state; in this sense they are “market-oriented”. Yet they are the furthest thing from promoting decentralization and diversity. On the contrary they work to destroy local institutions and to impose a single policy model across Europe, with Greece not at the trailing edge but actually in the vanguard. In this other sense the proposals are totalitarian—though the philosophical father is Friedrich von Hayek the political forebear, to put a crude point on it, is Stalin.

Modern Europe's version of market Stalinism, so far as it affects Greece, has three main prongs. The first concerns pensions, the second labor markets, and the third privatizations. Then there is an overarching question of taxes, austerity and debt sustainability, to which we can come back later.

With respect to pensions, the creditors demand that about one percent of GDP be cut this year from pension payments, in a country where almost half of pensions deliver sums below the poverty line. The specific demand would cut about 120 euros from pensions at the level of 350 euros or less per month. The government replies that while the pension system requires reform—the present early retirement age is unsustainable—that reform can only be done gradually and alongside the introduction of an effective unemployment insurance scheme.

On labor markets, the creditors have already imposed the near-complete elimination of collective bargaining and reduction of minimum wages. The government points out that the effect is to informalize the labor market, so that labor is not registered and pension contributions are not paid, which in turn undermines the pension system. The Greek proposal is to design a new collective bargaining system that meets the standards of the International Labor Organization.

As for privatization, the creditors have demanded the sale of airports, seaports, and electric utilities, among other assets, and that all this be done quickly. Here the Greek objection is not to private or foreign management of certain assets but rather against letting them go for cheap, or without conditions, or without retaining an equity stake. Thus in the ongoing privatization of the port of Piraeus to the Chinese firm Cosco, the government has insisted on an investment plan and on labor rights. (Completing the post-modern turn of language, here a left government in a capitalist country imposes union rights on a multinational corporation from a communist country.)

Turning to taxes, the creditors have demanded a hefty increase in the value-added tax (VAT)—which already has a top rate of 23 percent. Among other things, the burden would fall on medicines (and therefore on the elderly) and on the special rates enjoyed by the Greek islands (about 10 percent of the country by population), where tourism is centered and where costs are higher in any event. The government points out that tax increases on tourism hurt competitiveness, and that the overall effect of the increased tax burden will be to reduce activity, worsening the debt problem. What is needed, instead, is tax enforcement; reducing VAT evasion could, quite readily, permit rates to be lowered.

No one can suggest that wage cuts can bring Greece into effective competition for jobs in traded goods with either Germany or Asia.

What is missing from the creditors' demands is, well, reform. Cuts in pensions and VAT increases are not reform; they add nothing to economic activity or to competitiveness. Fire-sale privatization can lead to predatory private monopolies as anyone living in Latin America or Texas knows. Labor market deregulation is in the nature of an unethical experiment, the imposition of pain as therapy, something the internal records of the IMF as far back as 2010 confirm. No one can suggest that wage cuts can bring Greece into effective competition for jobs in traded goods with either Germany or Asia. Instead, what will happen is that anyone with competitive skills will leave.

Reform in any true sense is a process that requires time, patience, planning, and money. Pension reform and social insurance, modern labor rights, sensible privatizations and effective tax collection are reforms. So are measures relating to public administration, the justice system, tax enforcement, statistical integrity and other matters, which are agreed in principle and which the Greeks would implement readily if the creditors would permit it—but for negotiating reasons they do not. So would be an investment program emphasizing the advanced services Greece is well-suited to provide, including in health care, elder-care, higher education, research, and the arts. It requires recognizing that Greece cannot succeed by being the same as other countries; it must be different—a country with small shops, small hotels, high culture, and open beaches. A debt restructuring that would bring Greece back to the markets (and yes, that could be done, and the Greeks have a proposal to do it) would also be, on any reasonable reckoning, a reform.

The plain object of the creditors' program is therefore not reform. It is the doubling-down on debt collection in the face of disaster. Pension cuts, wage cuts, tax increases and fire sales are offered up on the magical thought that the economy will recover despite the burden of higher taxes, lower purchasing power, and external repatriation of profits from privatization. The magic has already been tested for five years, with no success in the Greek case. That is why, instead of recovering as predicted after the bailout of 2010, Greece has suffered a loss of over 25 percent of its income with no end in sight. That is why the debt burden has gone from about 100 percent of GDP to 180 percent, when measured in terms of face values. But to admit this failure, in the case of Greece, would be to undermine the entire European policy project and the authority of those who run it.

So the Greek talks remain at a stalemate. Actually, it is not quite a stalemate, since the Greeks are under extreme pressure. Either they concede to the creditors' positions, or they may find their banks closed and themselves forced out of the euro, with highly disruptive consequences at least in the short run. The creditors know this. So they keep backing the Greeks toward a wall—never changing their own position while complaining that the Greek side isn't working hard enough. And as the Greeks yield ground, inch by inch, the creditors simply press for more.

It is the ugly dynamic of negotiation under duress, between a strong party and a weak one, in this case complicated by the fact that the creditor side has no unified leadership, and hence no one—unless Angela Merkel finally steps forward to take up the role—who can make reasonable concessions and force through an acceptable deal. So the choices narrow. Either the Greek government will concede too much, lose its support and collapse, in which case whether the end result is another receivership or Golden Dawn, democracy is dead in Europe. Or, in the end, the Greeks will be forced to take their fate—at enormous risk and cost—into their own hands, and to hope for help from wherever it might come.