What’s the Matter With Indiana?

Amid all that’s clearly wrong with Indiana’s current direction under right wing Republican rule, Quigley ( If We Can Win Here: The New Front Lines of the Labor Movement, Cornell University Press, 2015) finds cause for optimism. “Despite a state political climate that proved inhospitable to labor in the right-to-work debate, private sector workers are launching union organizing campaigns across the state’s capital,” and in smaller towns as well. 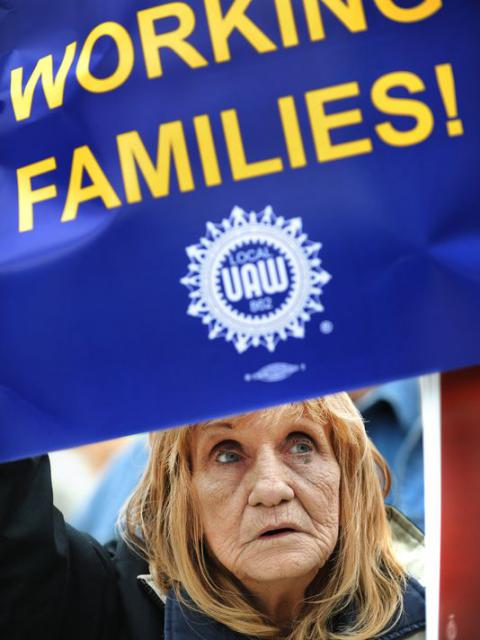 In recent years, Indiana has become a “red state” disaster area for labor, one of several in the Midwest that used to be more “blue.” The hostile environment for public employee unions, created there by a Republican governor more than a decade ago, has now enveloped unionized workers in manufacturing and the building trades.

Only 25 years ago, Indiana still had 20 percent of its workforce in unions. Today, that’s down to 9% “union density.” Workers rights and contract protections started to unravel after conservative Mitch Daniels was governor elected in 2004. Immediately after taking office, he issued an executive order, revoking state-employee bargaining rights, including dues check off, granted by his Democratic predecessor, Evan Bayh.

In 2005, 16,408 state employees were paying union dues; by 2011, only 1,490 still belonged to labor organizations representing government agency staffers. According to New York Times reporter, Steven Greenhouse, this membership decline was due “to workers deciding it was no longer worth paying dues to newly-toothless unions.” Jim Mills, a welfare worker interviewed by The Times, offered a different explanation for why his own union branch shrank from 260 to twelve members. With no union contract in place, his co-workers feared that management would retaliate against them for engaging in union activity.

Three years ago, the GOP-dominated state legislature passed a private sector “right to work” law. It barred negotiation of labor agreements that require all union-represented workers to pay membership dues or the equivalent amount in agency fees. In their latest session, Indiana legislators repealed 80-year old “prevailing wage” rules that maintained union standards on state-funded constructions projects. These measures were strongly opposed by unions and their allies but enacted anyway.

As Indiana labor activist Harry Targ noted recently, the cumulative effect of this corporate assault is already being felt. Indiana is undergoing a further shift from “high wage, family sustaining employment to low-wage marginalizing work,” a trend documented earlier this year by the Indiana Institute for Working Families. The IIWF found that workers “have steadily lost ground” since the official end to the recession and lack “quality jobs that pay well enough to meet a family’s most basic needs, such as childcare, housing, food and transportation.”

Fran Quigley is a law professor and workers’ rights advocate in Indianapolis who has much first-hand familiarity with the economic survival struggles of poor and working class people in his home state. His highly readable and incisive new book, If We Can Win Here: The New Front Lines of the Labor Movement (Cornell University Press, 2015) provides a window into the world of custodians, cafeteria employees, hotel staff members, home healthcare aides, campus workers, and security guards.

For 18 months, he accompanied them to work, union organizing meetings, community rallies, and protest picketing, as they attempted to improve their pay and job conditions. The resulting book documents their personal difficulty meeting basic family needs for affordable housing, medical coverage, childcare, or transportation, not to mention a union contract.

Amid all that’s clearly wrong with Indiana’s current direction under right wing Republican rule, Quigley finds cause for optimism. “Despite a state political climate that proved inhospitable to labor in the right-to-work debate, private sector workers are launching union organizing campaigns across the state’s capital,” and in smaller towns as well. If We Can Win Here includes detailed case studies of membership recruitment by UNITE-HERE and the Service Employees International Union (SEIU), in potential bargaining units both large and small.

Unlike Thomas Frank, in his well-known study of blue collar Midwesterners embracing conservative politics in Kansas, Quigley does not explore why some working class Indianans have voted against their own class interests in recent years. Instead, he describes in moving detail what motivates low-wage workers to challenge management in concert with their co-workers, despite disagreements about politics and sometimes related racial or ethnic differences.

At a UNITE-HERE organizing committee meeting in Richmond, Indiana, we meet one of the campus cafeteria workers employed indirectly, by Earlham College, through Sodexo, its global food services contractor.

“A small, hollow cheeked man, Marc is much loved by Earlham students, who see him as the embodiment of small-down Indiana…[He] is wearing a Pink Floyd T-shirt and a U.S. flag baseball cap, is fiercely anti-Obama and just as fiercely pro-union.” Showing no loyalty to long-time staff, Sodexo has just slashed benefits and hours, reducing half its Earlham workforce to part-time status. As Marc tells the meeting (and the author), “the company pulled the rug out from under us.”

While the same can be said, on a much larger scale, about Indiana’s company-oriented state government, the lessons of collective action are, for the moment, being re-learned primarily in workplaces, not in the realm of electoral politics. Some service sector workers know a little about their state’s “union legacy” from parents or grandparents who “worked in once plentiful manufacturing jobs.” But many others appear to be reliving the open shop conditions that pre-dated the triumph of industrial unionism in the mid-west, while knowing little or nothing about the three or four decades of post-war prosperity that organized labor helped engineer.

At Earlham, with student assistance, the Sodexo workers demonstrated such strong majority support for UNITE-HERE that they were able to win union recognition. As the author reports, “they are still trying to obtain a contract,” a difficult second stage in any private sector unionization effort where strike capacity has been undermined or 1930s-style militancy not fully re-ignited. Quigley devotes an entire chapter to the topic of “struggling for contracts.” It accurately depicts all-to-common worker frustration with “the slow bargaining process” that can sometimes lead to union decertification, particularly in smaller units with high job turn-over rates.

Not surprisingly, many of those most eager to change workplace power relations in Indianapolis are Black, Latino, foreign-born, and/or female. The author describes how the most effective full-time staffers from SEIU and UNITE-HERE interacted with the low-wage workers they were recruiting. Neither lasting organization nor modest economic gains are achievable without strong rank-and-file leaders. They must be “identified among the workforce, then recruited and trained to the point were they provide the impetus once supplied by outside organizers.” As Quigley notes, such “leadership development is the stuff of all successful social movements” and, to no less degree, union campaigns facing sustained employer resistance in any workplace.

If We Can Win Here also illustrates the importance of “bargaining to organize” and long-term strategic organizing in a particular industry or geographical area. The book describes base building at a Hyatt Hotel that spanned many years without yet producing a victory, as traditionally defined, for UNITE-HERE According to Quigley, that union “will likely rely on the threat of strikes in other cities to trigger the unionization of this Indianapolis hotel in late 2015,” a strategy requiring local activists “to look to their brothers and sisters in stronger union cities to win the day here.”

Meanwhile, SEIU-backed home health care workers also find themselves lacking the power now “to secure a strong union contract that provides good wages and benefits.” But that hasn’t stopped them from engaging in “demonstrations, lobbying and support for progressive Indiana candidates” to win job improvements through minimum wage increases and Medicaid expansion.

The great strength of Quigley’s book lies in its unusually detailed and sympathetic look at the “labor process” of workplace organizing. The tasks that union organizers perform—as “in-plant” committee members, “salts” (inside organizers operating under-cover) or in full-time staff roles—require patience, perseverance, personal courage, and “optimism of the will” that never flags. Anyone considering a career in this field or any other type of social justice work should consult If We Can Win Here before signing on. It’s a great reality check on the challenges that must be overcome, individually and collectively, on the road to union revival, both in Hoosier Country and any other state becoming more like it.