Why Bree Newsome’s Action Was the “Amazing Grace” I Needed

She showed us that we liberate ourselves through our actions. She reminded us, in the midst of deep sorrow, that we, who want to see a better America, must keep living, fighting, breathing, doing. 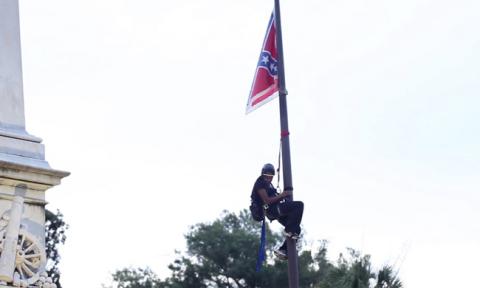 On Friday, June 24, I turned on my television to watch the funeral for Reverend Clementa Pinckney, one of the nine people shot dead at the Emanuel AME church in Charleston, South Carolina.

President Obama sang “Amazing Grace” at a time when many in the nation are mourning not only for the lost lives of the Emanuel 9, but the loss of black life that is stitched into the fabric of this country.

But then Bree Newsome allowed me to breathe.

I have heard “Amazing Grace” many times in my life. Black Americans singing, in moments of deep despair, is too familiar. I did not need to hear those sounds at this moment in our history.I needed something, but that was not it.

I switched to C-SPAN and, instead of seeing the funeral, I saw the news instead and learned that the U.S. Supreme Court had legalized same-sex marriage in all 50 states. I felt a surge of joy because I am truly invested in human rights for all in this country.

Yet I wondered if the many who were celebrating the Supreme Court ruling were feeling the death of the Emanuel 9 with the same depth as they felt this victory. As a black American, it is becoming increasingly difficult to maintain a sense of joy. These days, I am afraid to look at my social media feeds because, inevitably, I will see news of another murdered, unarmed, black person. It takes everything I have to not get crushed under the weight of the deep sorrow that many black people and our allies are feeling in this moment.

So I was not sure how to feel, how to be joyful for this forward movement in the country.

Fortunately, social media exploded with another story. On Saturday, June 27, I turned to my social media feeds and there, like a beam of light, was Bree Newsome taking down the Confederate flag from the Capitol building in Columbia, South Carolina.

“We removed the flag today because we can’t wait any longer,” Newsome said in a statement she sent out by email.

A graduate of New York University who has directed films and played in a funk band called Powerhouse, Newsome’s action has already garnered more than $115,000 on an Indiegogo campaign.

The singing of “Amazing Grace” felt like a familiar trope.

Until Newsome’s action, I had been imploding with rage at the fact that South Carolina did not have the decency to take down that flag as the body of Clementa Pinckney—who was a South Carolina state senator as well as a preacher—was brought to the state house. There was a lump in my throat, in my heart. The presence of that flag, with every wave, laid salt in the wound of the tragedy.

But then Bree Newsome allowed me to breathe. The anger and hurt disappeared, for a moment, because she let us know we are still powerful. She showed us that we liberate ourselves through our actions. She reminded us, in the midst of deep sorrow, that we, who want to see a better America, must keep living, fighting, breathing, doing.

Her act spoke to me in a way that the president’s singing did not. The singing of “Amazing Grace” felt like a familiar trope in the narrative of black America: We suffer, we sing, we forgive. Newsome’s actions were different and more inspired. They addressed white supremacy directly. When many were arguing that the Confederate flag could not be removed because of legal reasons, Newsome removed it. In that act, she reminded us that Americans who want to see change, can write a bolder narrative.

We must maintain a sense of love, joy, hope, and movement as we grieve. But that is hard to do when black America and our allies are suffering through a constant stream of murdered black Americans, together with symbols of our oppression like the Confederate flag.

Newsome demonstrated that it is possible to hold two conflicting emotions in balance. Out of her grief came an action that challenged racism and brought joy to me and to thousands of others. Joy is essential to struggle. Within the joy, planning, strategizing, hand holding, falling in love, and caring for one another, we extend the legacy of the murdered. I do not let them go when I am caught up in a moment of folly. I do not let them go when I am at the botanical gardens, talking with a friend about our suffering. They are walking with me, in my life, with every step. I remind myself of that. I remind myself that I am here to keep their memory alive and to work so that others do not suffer a similar fate. I still feel the ache of their loss, even as I celebrate the victories.

I am trying to balance sorrow and joy. These days, I seem to experience the former more than the latter. I need something to be done about white violence, and I mean something substantial, on the order of the Supreme Court ruling on same-sex marriage. The president singing “Amazing Grace” was not that thing.

Bree Newsome reminded me there is a legacy in black America that joins singing and spirituality and action. She reminded me that what I really need to see is the Confederate flag—and everything it represents—taken down.
This article was written for YES! Magazine, a national, nonprofit media organization that fuses powerful ideas and practical actions. Licensed under a Creative Commons Attribution-Share Alike 3.0 License.

Tanya Steele is a filmmaker and cultural critic who resides in Brooklyn, New York. She received an M.F.A. from NYU’s Tisch School of the Arts and is in development on two feature-length screenplays and is serving as writer and director of both. Follow her on Twitter: @digtanya