Last month, the historically ultra-conservative and oil-rich province of Alberta, Canada, did the unthinkable: It elected a left-wing government. And that new government just made one of its first big moves: It announced a serious clamp-down on climate change, including doubling its carbon tax. 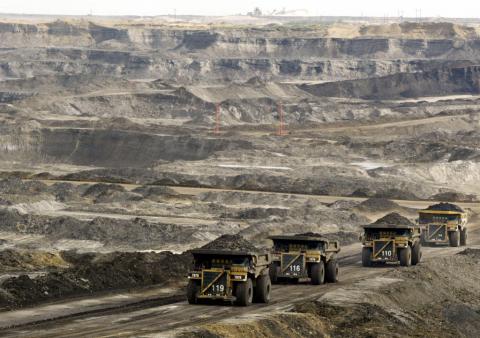 , AP PHOTO/JEFF MCINTOSH
Last month, the historically ultra-conservative and oil-rich province of Alberta, Canada, did the unthinkable: It elected a left-wing government. And that new government just made one of its first big moves: It announced a serious clamp-down on climate change.
“We need a climate change plan that is bold, ambitious, and will bring Alberta into a new era of responsible energy development and environmental sustainability,” Environment Minister Shannon Phillips said Thursday. “If we get it right, our environmental policy will make us world leaders on this issue, instead of giving us a black eye around the world.”
According to Phillips, the province will double its carbon tax. In other words, it will ask oil companies and other high-emitting industries to pay double what they’re paying now for pumping greenhouse gases into the air.
In addition, Phillips announced the creation of an advisory panel to review Alberta’s entire climate change policy, with the goal of making a preliminary pledge to reduce emissions at the COP21 United Nations Climate Change Conference in Paris at the end of this year. That conference is widely seen as the last chance for a global agreement that could feasibly limit global warming to 2°C.
Alberta is home to the tar sands, a type of oil that requires one of the most carbon-intensive extraction processes in the world. The province has come under fire from environmentalists for that process, which produces as much as three times the greenhouse gas emissions of conventionally produced oil. Canada is the world’s fifth-largest oil producer, and about 78 percent of that is produced in Alberta.
Phillips said that the current carbon tax of $15 per ton would double to $30 per ton by 2017. The carbon tax as a whole was set to expire, but instead of letting it, she said Alberta would renew and strengthen it.
Phillips also called the province’s current regulations crafted in 2007 “obsolete,” and said they need to be strengthened for Alberta to be taken seriously around the world.
“If Alberta wants better access to world markets, then we’re going to need to do our part to address one of the world’s biggest problems, which is climate change,” she said. “Now it is time to begin to address those issues.”
You can watch the entirety of Phillips’ comments here.
Prior to the May election, oil-rich Alberta had grown accustomed to having very strong conservative governance. The Progressive Conservative party had been in the leadership there for more than four decades, and the oil industry enjoyed the benefits of that. The Canadian environmental and energy think tank Pembina Institute has described the province’s environmental regulations on the oil industry as very weak. Indeed, because of Alberta’s carbon-intensive tar sands extraction processes, Canada’s energy industry recently became the country’s largest producer of greenhouse gases, surpassing transportation for the first time.
Still, environmentalists cautioned that Thursday’s announcement was just a start to a strong climate policy in Alberta. Dan Woynillowicz, director of policy for Clean Energy Canada, told the National Observer as much.
“Today’s announcement sends a clear and critical message to industry and Albertans: This is a first step,” he said. “Expect more robust climate action to follow.”
Subscribe to Portside