A Judge Just Ruled Against the Most Racist Name in Football

The Washington football team's name is a dictionary-defined slur—and now the federal Patent and Trademark Office has been ordered to cancel its trademark registration. 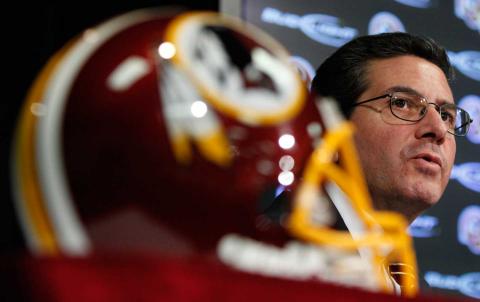 Traveling today through Gettysburg, Pennsylvania, site of the most critical—and bloody—Northern victory of the Civil War, I saw perhaps three Confederate flags up in front of people’s homes, emblazoned with the phrase, “Keep the Flag Flying!”

It was shameful to see a flag of racist terror so close to this hallowed ground. But it was also a reminder that there will always be dead-enders in this world: people who look at the 21st century and can only summon the urge to retreat. Racism is the ultimate dead end. It’s an embrace of violence and oppression, as well as a concession to the fantastical idea that time can somehow be turned backward. It says that we can lumber regressively toward a proud “tradition” that was largely fantasy and anything but proud.

The Confederate Flag is, as we have written about before, connected with iron chains to the logo of the Washington football team, and just as the flag is being denied official sanction over state houses of the South, the football logo was dealt a devastating blow on Wednesday. Judge Gerald Bruce Lee, in strikingly definitive terms, affirmed a previous ruling and ordered the federal Patent and Trademark Office to cancel the team’s trademark registration. Judge Lee wrote in his 70-page decision that the name meets the “legal standard” for defamation in that it “may disparage” a substantial part of the Native American community. In proving that the name met this standard, Judge Lee did not reference academic texts or polls or the decades of activism by Native Americans to get the name changed. Instead he referenced a radical text otherwise known as “a dictionary.” Sincerely. Judge Lee ruled that since the name is a dictionary-defined slur, arguing that it is not a slur, as team owner Dan Snyder continues to do, is absurd.

Dan Snyder, seething and sweating behind closed doors, may not get it (this is a safe characterization because he is always seething and sweating); and team president Bruce Allen, brother of former US Senator George “Macaca” Allen, may pledge to appeal this ruling, but they are like half-mad generals braying orders on the battlefield long after the war has ended. Meanwhile, attorney Jesse Witten, who represented Amanda Blackhorse and her co-plaintiffs, called it “a victory for human dignity and for my courageous clients who have waited so long for this ruling.”

It is also a victory for Suzan Shown Harjo, the writer and activist of Cheyenne and Hodulgee Muscogee heritage who brought the first trademark suit against the team 25 years ago. I spoke to Ms. Harjo and she said, “What a glorious day. Point by point we won everything. We won every single point. The ruling recalls the way all the public officials called for the Confederate Flag to come down after the horrific church murders in Charleston. It is politicians and judges saying that racist symbols and hate speech are things of the past and in the public interest—not just the interests of Native people or African-Americans—we don’t want to take them into the future. This ruling is like that. It is inserting these big ideas of racism being against the public interest into the American Bloodstream.… I’m grinning so much my teeth hurts. I want to hug this judge.

In practice, this ruling means that the team is still allowed to use the name. However, there is now no legal protection that accompanies it. This means that the team can continue to use it, for now, but it also cannot sue anyone else who attempts to profit from their brand. In other words, we have entered the “South Park Zone.” It is now open season on bootleg merchandise. We will see the market flooded with everything from Confederate Flags with the team logo (you can guarantee this team now getting embraced by the Stars and Bars crowd) to R—-— toilet paper, and the team can’t do a damn thing. We’ll see how long the 28 other NFL owners, most of whom find Snyder to be about as charming as Lyme disease, put up with this kind of “brand degradation.”

Meanwhile, Wednesday, July 8, 2015, will stand as a proud day for Amanda Blackhorse, Suzan Harjo, and the original members of the American Indian Movement who stated that the issue of racist mascotry was inextricably intertwined with the so-called “real issues” facing Indian country. Dan Snyder and Bruce Allen seem committed to stand with the racist, Confederate-loving original owner of the team, George Preston Marshall. Yet while they stand in the past, time is moving on without them. Fans of the team should also move on until they change this shameful, harmful, and altogether anachronistic name.