The recent riots at the for-profit Kingman Prison in Arizona are focusing renewed attention on that state legislature’s long, cozy relationship with the private prison industry. Prisoner unrest the July 4th weekend left 15 wounded and forced the transfer of 1,000 inmates to other facilities. The same facility, run by Management Training Corporation, suffered a major riot in 2010. The repeated failings of for-profit prisons have led Arizonans to ask some big questions. 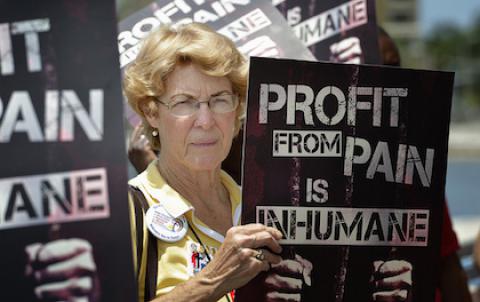 By now, you have probably heard about the riot at the for-profit Kingman Prison in Arizona. Days of unrest at the prison, run by the privately-held Management Training Corporation, left 15 wounded and forced nearly 1,000 incarcerated people to be transferred to other facilities.  The same facility also suffered from a major riot in 2010. Similarly, people detained at an MTC-run camp in Texas names Willacy rioted earlier this year, forcing that facility to close completely.

The Kingman riots are focusing renewed attention on the Arizona legislature’s long, cozy relationship with the private prison industry. The repeated failings of for-profit prison operators have led Arizonans and the editorial board for the state’s largest paper to ask some big questions:

The governor of Arizona has promised an investigation that will get to the bottom of what happened at Kingman. Unless he also plans to fully evaluate the costs and benefits (moral and economic) of allowing companies to profit from locking up our fellow citizens, it will be an incomplete analysis.

Here’s what we already know about Arizona and for-profit prisons:

The American Friends Service Committee in Arizona is calling on Governor Ducey to stop accepting bids for a new privately-run prison that could house up to 2,000 additional prisoners. Until the state can finally prove that private, for-profit prisons are the best option for Arizona, a lot of uncertainty will remain. Most of all, elected officials must be forced to honestly answer this one big question: are private prisons geared for our protection, or their own profits? We’re looking forward to hearing the response.

[Donald Cohen is the founder and executive director of In the Public Interest, a national resource and policy center focusing on privatization and responsible contracting. Read more articles by Donald Cohen.]