Rigged Settlement Could Give BP Billions in Tax Breaks

On July 2, the states attorneys general in Louisiana and four other Gulf Coast states celebrated an $18.7 billion settlement with BP over claims from the 2010 Gulf of Mexico oil spill. But, according to the Public Interest Research Group, at least $13.2 billion in the settlement is not defined as a penalty, meaning BP could potentially get billions in tax breaks, even on payments it made to restore natural resources damaged by the spill. 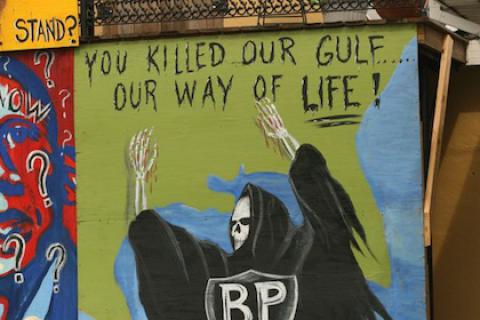 Last Thursday (July 2), states attorneys general in Louisiana and four other Gulf Coast states celebrated an $18.7 billion settlement with BP over claims from the 2010 Gulf of Mexico oil spill. A report from the U.S. Public Interest Research Group says the true value of the deal could be far lower after BP files its taxes.

Federal tax law prevents companies from deducting penalties paid for breaking the law from their corporate taxes. But damage payments -- such as money paid for coastal restoration -- can be treated as a business expense.

According to the Public Interest Research Group, at least $13.2 billion in the settlement is not defined as a penalty, meaning BP could potentially get tax breaks on that chunk of money. This includes payments to restore natural resources the spill damaged.

The settlement announced last week could wind up costing BP only around $14 billion after taxes assuming all those costs are written-off at the top 35 percent corporate tax rate.

Phineas Baxandall, the consumer group's senior analyst for tax and budget policy, said a federal judge ruled that BP broke the law. The company must pay for its misdeeds, not shift the burden to taxpayers, he said.

"This is not just an accounting question," Baxandall said. "There is a zero-sum game here between the American taxpayer and BP on this issue."

The Public Interest Research Group has asked the Justice Department to include specific language in the settlement that prohibits BP from claiming tax breaks on payments. It also wants the full details of the settlement to be made public. The court has ordered most of the settlement details confidential for now.

The only portion of the settlement that appears excluded from tax breaks is the $5.5 billion environmental penalty BP has agreed to pay for violating the Clean Water Act.

BP did not immediately respond to a request for comment.

Ed Sherman, a Tulane University law professor and a complex litigation expert who has followed the BP case closely, said the company likely negotiated for a lower Clean Water Act fine and higher natural resource damage payments with the tax advantage in mind.

Sherman said all sides benefit in ending what could have been years of litigation. But the tax breaks and the opportunity to make payments over 15 years -- even longer for some payments -- are distinct advantages for BP, he said.

"It was a fair settlement on both sides, but I think BP probably came out a little better," Sherman said.

Baxandall said the way the Clean Water Act penalty would be distributed to states under the settlement could lead to more write-offs.

Under the terms of the agreement, 80 percent of the $5.5 billion penalty would be distributed to five Gulf Coast states under the RESTORE Act. Signed into law in 2012, the act establishes a fund for the penalty money and a framework to divvy up funds for restoration projects in Louisiana, Alabama, Mississippi, Texas and coastal counties in Florida.

The funds are technically penalty money. But Baxandall said the way the money is used could be considered restitution, which would be a tax-deductible expense. He is worried BP could use that argument to press for more tax breaks.

This is not the first time settlement tax breaks have been called into question. The federal government's $1.1 billion settlement with Exxon after the Exxon Valdez oil tanker spill in Alaska was reported to have an after-tax cost of only $524 million.

A bill now in the U.S. Senate attempts to tackle the issue, requiring federal agencies to state whether out-of-court settlements are tax deductible. Companies would also be required to disclose whether they claimed settlement deductions in Securities and Exchange Commission filings.

In the meantime, the Public Interest Research Group is calling on the Justice Department to be more transparent about the settlement details.

Baxandall notes agencies such as the Consumer Financial Protection Bureau promptly post settlements online for public scrutiny. The Environmental Protection Agency started in 2013 to include language in its settlements specifically banning parties from claiming tax breaks on cleanup funds.

"If there is enough outrage about this and people voice their discontent during that period, then I would hope the Justice Department would insert the few words it would take to save taxpayers billions of dollars," Baxandall said.

If tax breaks are being used as a bargaining chip to finalize settlements, it needs to stop, he said.

"Everybody wins except for the public," Baxandall said.

[Jennifer Larino is a staff writer for NOLA.com | The Times-Picayune. She can be reached at jlarino@nola.com.]