The goal of strengthening Social Security was only one of the prime liberal issues barely audible from the East Room stage at the July 13 conference. But there was an undercurrent of concern over the prominence of commercial interests on the day’s agenda. Liberal leaders on Social Security have expressed frustration at the president’s “neglect” of calls to increase benefits for the most vulnerable seniors, especially ethnic elders and women. 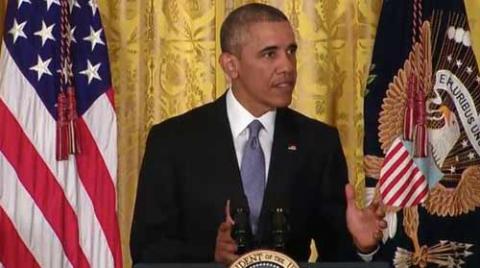 Amidst President Obama’s celebratory summer--with Supreme Court victories on Obamacare and same-sex marriage, his bold stance on prison-sentencing reform, and Confederate flags widely furled and stored--a curious off-note soured his standing on one of the Democratic Party’s signature issues--old-age security.

As the once-a-decade White House Conference on Aging (WHCoA) got underway last week, progressive Democrats, from Sens. Bernie Sanders and Elizabeth Warren to House Members John Coyers and John Lewis, sent a letter to 1600 Pennsylvania Avenue calling for what many would consider a no-brainer for this president, the expansion of Social Security, particularly on the program’s 80th birthday this year.

The letter’s 74 congressional signatories reminded Obama, “More than half (53 percent) of today's working Americans are not expected to have sufficient resources upon retirement to maintain their standard of living."

The goal of strengthening Social Security was only one of the prime liberal issues barely audible from the East Room stage at the July 13 conference. But there was an undercurrent of concern over the prominence of commercial interests on the day’s agenda.   Liberal leaders on Social Security have expressed frustration at the president’s “neglect” of calls to increase benefits for the most vulnerable seniors, especially ethnic elders and women.

We pledged to fight conservative efforts to “privatize” the program for individuals’ Wall Street investment. But in proposing new rules to help workers increase their retirement savings, the president stopped short of supporting stronger benefits for those most in need.

Attendees and live-streaming viewers around the country were enthusiastic about several major proposed regulations. One promises to improve quality and safety requirements for the nation’s 15,000 nursing homes. Another proposal would enable very low-income and frail homebound elders and people with disabilities to use food stamps for Meals on Wheels.   Key among several Medicare announcements, doctors will be paid starting in 2016, to counsel patients about their end-of-life care options--the same voluntary service that former vice-presidential candidate Sarah Palin derided six years ago as “death panels.”

But absent was any substantive discussion of hospice and palliative care.   An additional new guidance from the U.S. Department of Housing and Urban Development will reinforce that the agency’s equal-access rule applies to all HUD-subsidized housing, such as Section 202 Supportive Housing for the Elderly, barring discrimination based on “actual or perceived sexual orientation, gender identity or marital status.”

Yet, neither the president nor WHCoA speakers addressed the looming crisis in affordable housing for seniors. For instance, since the height of the Great Recession, the White House and Congress have ended any new Section 202 developments.   Furthermore, funding is so small for Section 8 rental vouchers that waiting lists are literally years long, especially in urban areas like Detroit, Oakland orBoston, where elders are being displaced by gentrification, mortgage fraud or other factors.

Housing was only one prime issue left off the dais throughout the day. Because Congress did not fund this WHCoA, as it has in past decades, the current administration decided to hold a scaled-down event with a limited program. But the final agenda--not released until last week--surprised even seasoned observers.

A Third of Speakers Corporate

Mark Miller, retirement columnist for Reuters and Money.com, commented in an e-mail for this article, “I've been surprised, and a little disturbed, to see that the WHCoA was so commercial. My in-box has been flooded all week with story pitches from corporations that participated in some way, who want to use that to their own benefit.

”  Monday’s conference had presentations on caregiving, financial security, healthy aging, elder justice (elder abuse prevention) and technology. In fact, three of the day’s 10 talks were focused on tech, emphasizing innovative entrepreneurship.   The conference, with 45 speakers plus the president, included 14 corporate speakers from such entities as Airbnb, Uber, Walgreen’s and the American Bankers’ Association. There were also 14 administration personnel.   The remaining one-third of speakers ranged from one union representative, a couple of academic experts, and family caregivers, among them television and Broadway star, David Hyde Pierce.   Pierce, whose family has dealt with Alzheimer’s disease, proved an adept moderator of the panel on caregiving.

At one point, panel member Ai-jen Poo, of Caring Across Generations, noted that the poorly supported 50 million caregivers in the United States will double by 2050 with the aging of the boomer generation. Not only do those families face looming shortages of geriatric health care professionals, the 2 million direct-care workers now earn merely $13,000 a year on average.   In a telling moment, Pierce looked up at numerous audience members with tee shirts advocating a $15 minimum wage for those care workers and quipped, "I keep hoping capitalism will catch up with the need."

It was a sentiment that would echo throughout the day’s program.   Giving a stirring presentation was UCLA gerontologist Fernando Torres-Gil, who presided over President Clinton’s 1995 WHCoA as that administration’s Assistant Secretary of Aging. He said, “As our society is becoming more ethnically diverse, the challenge will be to break down the walls of age and diversity.”

The percentage of ethnic Americans 65-plus will double by 2050 to more than four in 10.   Research by the MacArthur Foundation and others has exposed inequality in American longevity. Findings show that black males with low educational levels live an average of 14 years less than college-educated white men. And the life-expectancy gap between white women with high and low levels of learning is 10 years.   Yet longevity inequality and the intergenerational need for greater educational investment were left off Monday’s WHCoA platform.

In addition to announcing a range of federal initiatives, the White House unveiled a series of public-private partnerships.   A WHCoA Fact Sheet lists about 30 companies involved in joint projects with government agencies or nonprofits.   Speaking on the conference financial-security panel, Bank of America’s Andy Sieg, head of Global Wealth and Retirement Solutions, announced the introduction of the bank’s Merrill Lynch Longevity Training Program for human resources and benefit plan professionals, developed in partnership with the USC Leonard Davis School of Gerontology.

Merrill Lynch will instruct its bankers to provide retirement and benefit plan services to 35,000 companies and more than 5 million employees.   Worthy as this program may be, the inclusion of BofA on such a limited program seemed a questionable choice, at least from a White House public relations perspective. Only last fall the Justice Department announced a nearly $17 billion settlement with the corporation over massive mortgage fraud. As recently as this May, the New York Times reported difficulties with the bank’s program under the settlement to meet consumer loan relief provisions.

Another question mark on the WHCoA program was why it devoted the only segment on the vital issue of universal design to a single high-tech company, IDEO, spotlighting the design firm’s launch of its Powerful Now: Positive Aging for All program.

Lacking in the conversation was any mention of such vital concerns as inexpensive, safe and appealing home modification beyond ugly grab bars, with public assistance for older homeowners on fixed incomes; efforts to persuade home builders to design accessible homes from the start; or product design to prevent home injuries, such as fall-prevention work done by the Centers for Disease Control and Prevention.

Do ‘With, Not For’ Elders

IDEO did present a delightful surprise, staff designer Barbara Beskind, age 91. Accomplishing good design for elders, she said, is doing so “with, not for” older people.

In an awkward moment toward the end of the conference, Kathy Greenlee, who heads the U.S. Administration on Aging, recognized several prominent invitees to ask questions.   Wilson Wewa of the Confederated Tribes of Warm Springs of Oregon, who said he was one of two tribal members in the room. He first called for research at the 566 tribes across Indian Country on elder abuse, “the elephant nobody wants to see.”   Wiwa then stated, “Technology is great. I come from a rural area with little towns like Fossil, Ore., that nobody knows about that have 25 people in them. We have reservations that have no electricity. And therefore we don’t have technology. So we have to solve getting computers, technology to rural areas, not only in Indian America, but also through the rest of rural America.”

Greenlee very respectfully interrupted him because time was so short for audience input. Wiwa concluded, “Yes, I just want to say I--I’m asking for help for those areas, and we need to be cognizant that we’re all in this together.”

Paul Kleyman is editor of Generations Beat Online (GBONews.org) and an editor at New America Media.