﻿The Center for Medical Progress is led not by well-meaning bioethics geeks but by some of the most virulent members of the anti-choice movement. 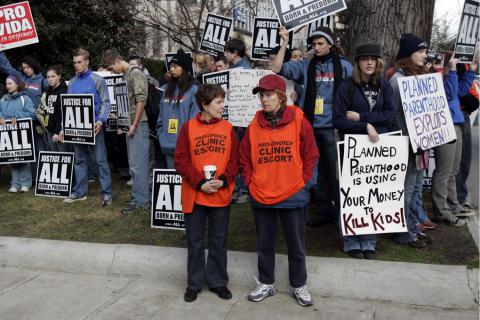 Planned Parenthood clinic escorts stand in front of a group of anti-abortion protestors outside a clinic in Washington., ﻿AP Photo/Susan Walsh

This article was reported in partnership with The Investigative Fund at The Nation Institute.

As soon as a video purporting to expose Planned Parenthood for “selling” fetal tissue emerged, suspicions arose that the creators, going under the name The Center for Medical Progress (CMP), were not “citizen journalists dedicated to monitoring and reporting on medical ethics and advances,” as their website declared, but “anti-choice internet yahoos,” as feminist journalist Jill Filipovic tweeted. The video, long on misleading editing and short on any evidence for its claims of illegal behavior, had all the hallmarks of right-wing agitprop.

David Daleiden, the founder of CMP and the main promoter of the video, has emerged as the face of the group and the target of scrutiny; his previous anti-choice activity included a stint working for the credibility-challenged group Live Action, which promoted the video. But the group’s more intriguing connections are hidden in a short filing with the state of California, which shows that CMP is led not by well-meaning bioethics geeks but by some familiar characters in the anti-choice movement.

A “initial registration form” for CMP (viewable here), filed with the Office of the California attorney general in 2013, lists three board members: David Daleiden, Albin Rhomberg, and Troy Newman.

Board member Troy Newman is president of the pro-life group that ran a multi-decade harassment campaign of Dr. George Tiller.

Newman, who is listed as the group’s secretary, is the president of Operation Rescue, a pro-life group that ran the multi-decade harassment campaign of Dr. George Tiller of Wichita, Kansas, a campaign that only ended when Scott Roeder, who was an active part of Operation Rescue activities in Wichita, murdered Tiller in his church in 2009.

Though Newman immediately distanced Operation Rescue from Roeder after the killing, Amanda Robb reported in Ms. magazine’s spring 2010 issue that Roeder told her he had gone “to lunch with Newman and asked him about using violence to stop abortion.”

Robb: What did you say to him?
Roeder: Oh, something like if an abortionist—I don’t even know if it was specifically Tiller…was shot, would it be justified?… And [Newman] said, “If it were, it wouldn’t upset me.”

Newman said he had “no recollection of ever meeting Scott Roeder.”

It was Troy Newman who moved Operation Rescue headquarters to Wichita in 2002, targeting Tiller’s clinic with protests. More recently, in 2012, Newman blamed the murder of Tiller not on Roeder or the history of harassment, but on Wichita district attorney Nola Foulston, who declined to join a legal harassment campaign against Tiller spearheaded by then–attorney general Phill Kline. “If Nola Foulston had done her job with George Tiller, he would still be alive today,” Newman told the AP. Operation Rescue continues to this day to employ Cheryl Sullenger, who, in 1988, was found guilty of attempting to bomb a family-planning clinic. She did two years for her crime in federal prison.

Also included in the California document is the less-well-known Albin Rhomberg, who spearheaded a campaign in 2006 to get mandatory parental notification for minors seeking abortion into law in California. (The ballot measure failed.) As part of this campaign, Rhomberg claimed that allowing minors to abort their pregnancies is about “protecting men who sexually abuse children.”

Rhomberg, like Newman, is deep in the world of anti-abortion protest and reportedly shows up to scream at women at the Sacramento Planned Parenthood on the regular.

THE NATION IS READER FUNDED.  YOUR SUPPORT IS VITAL TO OUR WORK.

In 1996, Rhomberg sued California Governor Pete Wilson, claiming that the governor had suppressed his free speech rights after Rhomberg and other anti-choice protesters were arrested for disrupting the religious service at the governor’s 1991 inauguration. Protesters were hauled out of the service, of which Wilson had attended, screaming about how it was sacrilegious for a Catholic cathedral to host the nondenominational service for a pro-choice politician like Wilson.

Rhomberg lost his lawsuit, though the decision does have its moments of dark comedy:

Appellants also claim third-party standing to vindicate the rights of the unborn. Even if we conceded for the purpose of argument that the unborn were third-parties for purposes of this lawsuit, appellants offer no evidence or reasoning as to why their claim should cause us to depart from the U.S. Supreme Court’s general rule that: “Ordinarily, one may not claim standing … to vindicate the constitutional rights of some third party.”

The CMP doesn’t appear to have filed a single tax return as a nonprofit so nothing is known about its budget or how its money is spent.