Based on a true story, 'Jimmy’s Hall' is about Jimmy Gralton the only Irishman deported as an illegal alien from Ireland, the land of his birth – without so much as a trial! Of course Gralton’s true crime was to fight against the reactionary church, aristocratic landowners and narrow nationalism by setting up a hall where ordinary people could dance to jazz music, study art and pursue a more class conscious politics during the Depression. 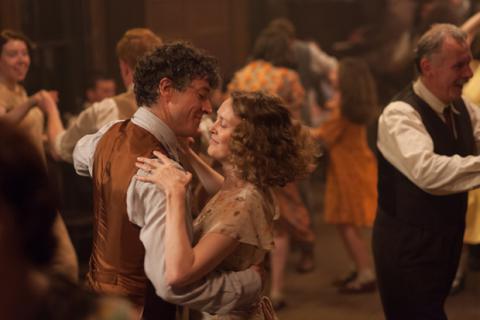 For those of you who are socialist cineastes and lefty film fans, who love movies in the tradition of Sergei Eisenstein’s Battleship Potemkin and Herbert Biberman/Michael Wilson’s Salt of the Earth, I am the bearer of glad tidings: What is arguably the greatest contemporary leftist writer/director team in the English-speaking world now making pro-worker films are back! Director Ken Loach and screenwriter Paul Laverty’s “Jimmy’s Hall” began its national U.S. rollout earlier this month on July 3rd..

Based on a true story, “Jimmy’s Hall” is about Jimmy Gralton (the handsome, charismatic Barry Ward), the only Irishman deported as an illegal alien from Ireland, the land of his birth – without so much as a trial!  Of course, Gralton’s true crime was to fight against the reactionary church, aristocratic landowners and narrow nationalism by setting up a hall where ordinary people could dance to jazz music, study art and pursue a more class conscious politics during the Depression.

It’s the class struggle dimension of their outlook that pits “Jimmy’s Hall” workers against the narrow nationalism of the not-so-free Free Irish State of the 1930s. Here, the Loach/Laverty team return to historical terrain they already trod in the 2006 Irish Revolution epic “The Wind that Shakes the Barley”, with Ireland’s leftwing struggling with the less radicalized nationalists.

The Loach/Laverty team is in the socialist realist tradition of filmmaking and the kitchen sink school of British drama, focusing on ordinary people who do extraordinary things, inspiring proletarian protagonists who take a stand, against all odds. Previously, separately and jointly, these undaunted progressives brought us the 1995 Spanish Civil War epic about the International Brigades “Land and Freedom” (written by Jim Allen) and jointly: 1996’s “Carla’s Song” about the Sandinistas; 2000’s pro-unionization, justice for janitors “Bread and Roses” about Latinos on strike in L.A., starring Oscar winner Adrien Brody; 2006’s Irish Revolution epic “The Wind that Shakes the Barley”; the 2010 “Route Irish” about private contractors in Iraq; and Laverty wrote 2010’s “Even the Rain”, about the Cochabamba water rebellion in Bolivia, starring Gael Garcia Bernal.

“Jimmy’s Hall” also contains great acting, which enlivens the mass action mise-en-scene and sensibility. As Oonagh, Simone Kirby – who has acted at the Abbey Theatre and Old Vic – possesses a smoldering sexuality, whose love and desire for Jimmy has been thwarted by deportation. Even more heartfelt is Aileen Henry, who plays Jimmy’s mother. She calls to mind Vera Baranovskaya, who starred in Vsevolod Pudovkin’s 1926 Soviet classic “Mother”, based upon Maxim Gorky’s revolutionary novel. Even more so, this Irish earth mother is reminiscent of Jane Darwell, who movingly depicted Ma Joad in another immortal masterpiece of the silver screen, John Ford’s 1940 adaptation of John Steinbeck’s pro-union novel “The Grapes of Wrath,” screenplay by an Oscar-nommed Nunnally Johnson. (Darwell and Ford struck Oscar gold with their “Wrath” work.) As she blithely rescues Jimmy from being busted by the coppers the scene stealing Henry also recalls Sgt. Schultz – famous for exclaiming: “I know nothing!” – in the 1960s POW sitcom “Hogan’s Heroes.” Of course, Barry Ward’s portrayal of the exultant rebel who loves jazz and Bolshevism has the poetry of a James Joyce novel.

This is great socialist cinema in the Eisensteinian tradition of revolutionary filmmaking, a heritage that the Loach/Laverty team gloriously, lovingly perpetuate. "Jimmy’s Hall” may be an ode to jazz, but it made me feel like singing those 1968 lyrics by the Rolling Stones, co-written by Keith Richards, whose grandfather was the first Labor Party representative of his district:

The original source of this article is Hollywood Progressive http://www.hollywoodprogressive.com

[The author, Ed Rampell, is a film historian and reviewer.  His interview with legendary Greek director Costa-Garvas was published in The Progressive Magazine. Rampell is the co-author of The Hawaii Movie and Television Book, released by Honolulu’s Mutual Publishing in October 2013.]