The College Board has revised its guidelines for teaching Advanced Placement History, which has broad influence in high school history courses, to accommodate right-wing pressures. Among the changes: Manifest Destiny is given a more benign treatment and violence against Native Americans is downplayed. 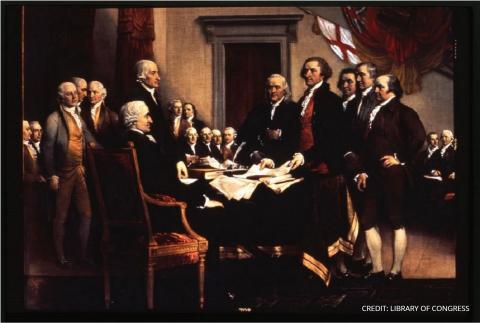 ,
After backlash from conservatives that AP guidelines released last year by the College Board were unpatriotic, the new AP standards, which are effective immediately, will use the phrase “American exceptionalism,” and includes the founding fathers, according to Newsweek. The College Board said it “previously assumed it wasn’t something it needed to spell out as part of what would be taught in an American history course.”
Some of the main criticisms of the guidelines, conservatives voiced, were less emphasis on the founding fathers and more emphasis on slavery. The guidelines also included earlier American history that included violence against Native Americans and mentioned the growing influence of social conservatives. There were also complaints that World War II was not emphasized enough, but military victories will be given more attention in the new standards. Mentions of slavery will be “roughly the same” as previous standards, according to Newsweek.
Conservatives also took issue with the framework’s description of the term “manifest destiny.” The definition, according to The Daily Caller:

The idea of Manifest Destiny, which asserted U.S. power in the Western Hemisphere and supported U.S. expansion westward, was based on a belief in white racial superiority and a sense of American cultural superiority, and helped to shape the era’s political debates.

AP American history courses in particular became a political battleground when the College Board released new guidelines in October 2012. According to Talking Points Memo, the public controversy started with Larry Krieger, a retired history teacher. Then The Republican National Committee noticed Krieger’s remarks and campaigned against the new framework. The RNC asked Congress to stop funding the College Board, saying it “emphasizes negative aspects of our nation’s history while omitting or minimizing positive aspects.”
After the issue picked up momentum, more and more state legislators got involved in decrying the new guidelines. An Oklahoma legislative committee voted to ban AP history class and Oklahoma Rep. Dan Fisher (R) introduced legislation “prohibiting the expenditure of funds on the Advanced Placement United States History course.” In Colorado, the Jefferson County school board intended to create a committee to review the AP history course. Students protested revisions to the new standards and soon after, the Jefferson County school board cancelled a review of the standards.
In September of last year, Ben Carson, a pediatric neurosurgeon who is now running for president, said “most people” who take the course would be “ready to sign up for ISIS.”
For conservatives, many of whom actively oppose Common Core standards, it may have added insult to injury that the head of the College Board is David Coleman, one of the major leaders behind the Common Core standards, according to the Washington Post.
The AP standards are just one piece of the debate over how to accurately cover American history, especially if you intend to describe the actual experiences of people other than white, landowning men. Texas also recently changed its state academic guidelines, which means its new textbooks won’t mention the Ku Klux Klan or Jim Crow laws. Texas is a very influential textbook market, and publishers tend to look to Texas when deciding content for the textbooks they publish.
Casey Quinlan is an education reporter for ThinkProgress. Previously, she was an editor for U.S. News and World Report. She has covered investing, education crime, LGBT issues, and politics for publications such as the NY Daily News, The Crime Report, The Legislative Gazette, Autostraddle, City Limits, The Atlantic and The Toast.