Iran's foreign minister has put forward three proposals: negotiations on a nuclear weapons elimination treaty; taking nuclear arsenals off high alert (for example, by removing warheads from missiles); and the creation of a zone in the Middle East free of weapons of mass destruction. This proposal represents a challenge to the members of the UN Security Council (all nuclear powers) as well as Israel, Pakistan and North Korea. 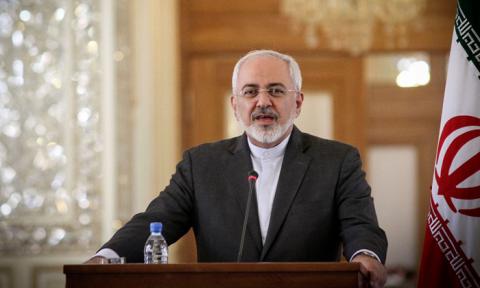 Iran’s foreign minister, Mohammad Javad Zarif, has called on Israel and the world’s eight other states with nuclear weapons to begin disarming, in response to his country’s acceptance of strict curbs on its nuclear programme in an agreement reached earlier this month.

Writing in the Guardian, Zarif argues that by agreeing to the Vienna deal, titled the joint comprehensive plan of action, Iran was honouring the spirit of the nuclear non-proliferation treaty (NPT), in which states without nuclear weapons promise not to acquire them. But he says the nuclear weapons states are not keeping their side of the bargain by disarming.

“The cold war-era asymmetry between states that possess nuclear weapons and those that don’t is no longer tolerable,” the minister writes, claiming Iran had “walked the walk” on non-proliferation.

“Meanwhile, states actually possessing these destructive weapons have hardly even talked the talk, while completely brushing off their disarmament obligations under NPT and customary international law. That is to say nothing of countries outside the NPT, or Israel, with an undeclared nuclear arsenal and a declared disdain towards non-proliferation, notwithstanding its absurd and alarmist campaign against the Iranian nuclear deal.”

Israel does not officially confirm its nuclear arsenal, but it is believed to have about 80 warheads. Zarif’s remarks also represent a rebuke to the five permanent members of the UN security council, all armed with nuclear weapons – the US, Russia, France, the UK and China – as well as the three other nuclear-armed states which, like Israel, are not NPT signatories: India, Pakistan, and North Korea.

Zarif makes three proposals: for negotiations to begin on a nuclear weapons elimination treaty; that this should lead initially to nuclear arsenals being taken off high alert readiness (for example, by removing warheads from missiles); and for the creation of a zone in the Middle East free of weapons of mass destruction.

However, efforts to agree on further steps towards disarmament and the creation of a WMD-free zone in the region failed at a global conference in May to reinvigorate the NPT, which ended in acrimony. With his commentary, Zarif is signalling Iran’s willingness, with the Vienna deal under its belt and as the current chairman of the Non-Aligned Movement (a group that still functions on nuclear issues), to take on the leadership of the campaigns for disarmament and the WMD-free zone.

Zarif says the campaign “will probably run into many hurdles raised by the sceptics of peace and diplomacy. But we must endeavour to convince and persist, as we did in Vienna”.

Since a cold war high in 1986, when global stockpiles of nuclear warheads topped 65,000, the main weapons states have reduced their arsenals considerably. There are now thought to be fewer than 16,000 warheads worldwide, of which 14,700 are held – roughly equally – by the US and Russia. But the disarmament is now approaching a standstill. The Obama administration wanted to follow the 2010 New Start agreement with another, more ambitious, arms control treaty, but the dramatic worsening in relations halted progress. Russia and the US are modernising their nuclear arsenals.

Patricia Lewis, the research director for international security at the Chatham House thinktank, said: “Most interesting to me is that Zarif is strongly linking the nuclear deal in Vienna to the WMD-free zone. Iran used to be a thought leader in this process – a role it absconded from in recent years. It looks as if once again it may be prepared to take this on as a major issue. The fascinating thing to watch will be how Israel will respond, a country that won’t even reveal its nuclear weapons capability and remains outside the NPT.”

Julian Borger is the Guardian's diplomatic editor. He was previously a correspondent in the US, the Middle East, eastern Europe and the Balkans. His book on the pursuit and capture of the Balkan war criminals, The Butcher's Trail, will be published by Other Press (NY) in January 2016.