We the People and our Patents

An early expression of democracy, the US patent system is out of step with today’s citizens. 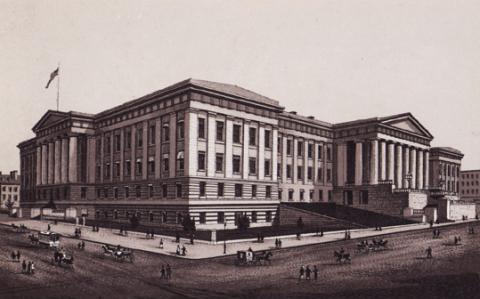 This year, July 31 marks the 225th anniversary of the first patent issued in the United States. Though the American patent system was designed initially to stimulate innovation, some citizens now argue that it’s actually hurting innovation, limiting access to technology and promoting unethical areas of research and innovation. These critics are making their voices heard through courtroom challenges, legislative hearings and even street protests.

This grassroots activism might seem strange. After all, the patent system is a highly specialized technical and legal domain, seemingly of interest only to inventors seeking exclusive rights to commercialize their new technologies for a limited period of time. Why has it become such a controversial site, and what can policymakers and citizens do about it? 1869 patent drawing of a flying machine. The US National Archives

We the people and our patents

When first developed in the late 18th and early 19th centuries, the US patent system was designed to be democratic – particularly in comparison to the European patent systems of the time.

European royal courts bestowed patent privileges upon entrepreneurs for a high price. By contrast, the US system issued patent rights to inventors. And it encouraged widespread participation in the system by keeping patent application fees low and creating public displays of patented technologies to inspire future innovation.

The US system, in other words, put patents, innovation and entrepreneurship in reach for every citizen. Policymakers thought this would increase innovation, which would produce economic and eventually social benefit. By many measures, these efforts were successful. Patent application rates grew throughout the 19th and 20th centuries, and in 2014, the US issued over 300,000 patents on innovations ranging from photocopiers to solar panels. Indeed, many industries – from railroads to pharmaceuticals – have credited their success to the modern patent system.

And this approach has also gone global, buoyed by international legal agreements designed to create a uniform patent regime that would make it easier for inventions to travel, for inventors to reap rewards across borders and for markets to become transnational.

This centuries-old system, which continues to this day, assumes widespread public agreement on the idea that stimulating innovation through patents will ultimately benefit everyone. It envisions every citizen as a potential inventor, and expects that if legislators and the courts serve the interests of inventors, they automatically serve the interests of the public. And it assumes the public will trust its decisions because the patent system is guided by scientific knowledge and the law.

Patents persecuting rather than protecting? But the dynamics of the patent system have changed in recent decades. Public health activists have filed lawsuits stating that, rather than increasing access to technology, patents create monopolies that make good health unaffordable and inaccessible for many of us. In 2013, a coalition of patients, health care professionals and scientists challenged patents covering genes linked to breast and ovarian cancer at the US Supreme Court. They argued the patents had led to expensive and poor-quality genetic tests available only through one company: Myriad Genetics, the patent holder.

Meanwhile, small farmers have organized protests against seed patents, suggesting they accelerate the corporate control of agriculture in ways that are damaging for their livelihoods, for innovation, for consumers and for the ecosystem.

And civil society groups have instigated legislative hearings and media campaigns arguing that patents implicitly provide moral certification for the development and commercialization of ethically controversial areas of research and development. Such campaigns began as early as the 1980s, when environmentalists, animal rights organizations and religious figures challenged the patentability of genetically engineered animals. They worried that by turning these animals into commodities, the patent system would transform our understanding of ownership and our relationship with the natural environment.

Patent system officials and lawyers tend to view this activism as seriously misguided. They argue that these citizen challengers lack the expertise to understand how the patent system works: it is a limited domain focused merely on certifying the novelty, inventiveness and utility of inventions. This technical and legal orientation is also embedded in the rules and processes of the system, which make it virtually impossible for average citizens to participate, except by submitting patent applications.

Based on research for my upcoming book on the politics of patents on life forms, which include genetically engineered plants and animals, human genes and embryonic stem cells, I suggest that these responses from the usual participants in the patent system, as well as the structure of the US patent system itself, are out of step with modern democratic politics.

Citizens are playing a more active role in science and technology policymaking in a variety of ways. They are now trying to ensure that the systems that regulate the development, availability and use of innovation better reflect their values and concerns. For instance, patient advocacy groups have forced their way onto the review panels that distribute government funding for biomedical research, in order to maximize not just scientific, but public, benefit.

In the case of the patent system, traditional participants miss that the patent system’s scope and structure were originally built with a different kind of public (and public interest) in mind. The country’s founders targeted their patent policies to a small, white and male citizenry. But today, America’s multi-ethnic population is far more critical and makes a diverse set of demands of science and technology policy institutions.

Is it possible to reform the system to accommodate the newly engaged public? Indeed, there is no natural definition of what the patent system is, what citizens should expect of it, or who should participate and how they should do so.

Consider, for example, the pan-European patent system, which by most accounts is quite similar to its US counterpart. In recent years, it has demonstrated openness to civil society participation in its bureaucratic and court proceedings, and incorporated attention to moral and socioeconomic concerns into its decision-making. It has been particularly sensitive to citizen concerns regarding patents on software and biotechnology. A 2005 protest against software patents in the EU. Nath el Biya, CC BY-SA

In 2007, the European Patent Office invited a variety of its critics to participate in developing an unprecedented report, entitled Scenarios for the Future, that identified the challenges and opportunities it would face over the next 30 years. It noted, for example:

Whether or not the patenting system is at fault for a failure to get drugs to those who need them is immaterial. Blame is laid at the door of the IP system by many forces in society.

In response, institutions across Europe have taken steps to limit patent-based monopolies that might hurt public health and agriculture.

It is worth observing that while the US system was initially conceived as a democratic improvement upon the European systems of the time, today’s pan-European patent system is far ahead of its US counterpart in terms of both its public engagement and its attention to the implications that citizens care about.

If the US patent system wants to maintain public trust, it has to realize that the 21st-century citizen is quite different from her 18th-century forebears. Today’s citizen cares about the ethical and socioeconomic implications of patents and the technologies they cover and is not content to assume that the system’s benefits eventually trickle down. And she seeks to have an active role in decision-making.

Taking this citizen seriously will require serious patent system reforms. Possible reforms include increasing opportunities for the public to participate in patent decision-making, allowing more legal and bureaucratic challenges on behalf of the public interest, and incorporating more emphasis on ethical and socioeconomic implications into our patent and innovation policies.