The country has lost one of its most passionate and eloquent voices for the cause of social and economic justice. 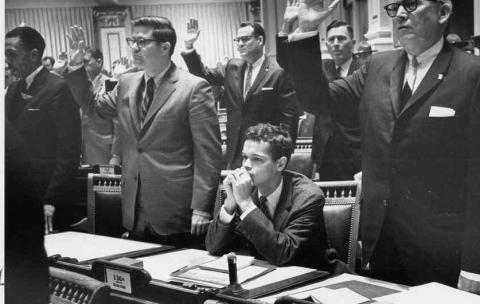 In January 1966, Julian Bond is not seated in State Legislature because of his opposition to the War in Vietnam,Atlanta Journal

Julian Bond, a charismatic figure of the 1960s civil rights movement, a lightning rod of the anti-Vietnam War campaign and a lifelong champion of equal rights, notably as chairman of the N.A.A.C.P., died on Saturday night in Fort Walton Beach, Fla. He was 75.

Mr. Bond was one of the original leaders of the Student Nonviolent Coordinating Committee while he was a student at Morehouse College in Atlanta. He was the committee’s communications director for five years and deftly guided the national news media toward stories of violence and discrimination as the committee challenged legal segregation in the South’s public facilities.

He gradually moved from the militancy of the student group to the leadership of the establishmentarian N.A.A.C.P. Along the way, Mr. Bond was a writer, poet, television commentator, lecturer and college teacher, and persistent opponent of the stubborn remnants of white supremacy. 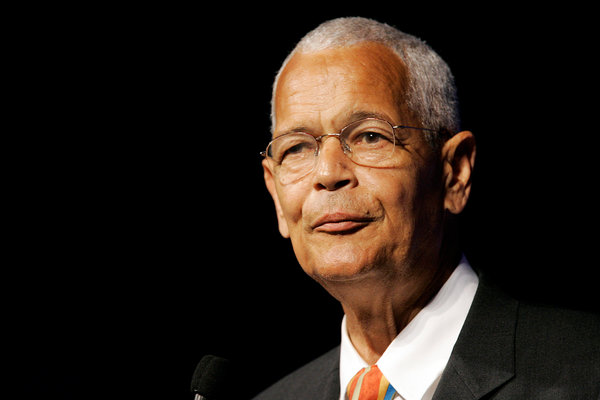 He also served for 20 years in the Georgia General Assembly, mostly in conspicuous isolation from white colleagues who saw him as an interloper and a rabble-rouser.

Mr. Bond’s wit, cool personality and youthful face — he was often called dashing, handsome and urbane — became familiar to millions of television viewers in the 1960s and 1970s. On the strength of his personality and quick intellect, he moved to the center of the civil rights action in Atlanta, the unofficial capital of the movement, at the height of the struggle for racial equality in the early 1960s.

Moving beyond demonstrations, Mr. Bond became a founder, with Morris Dees, of the Southern Poverty Law Center, a legal advocacy organization in Montgomery, Ala. Mr. Bond was its president from 1971 to 1979 and remained on its board for the rest of his life. 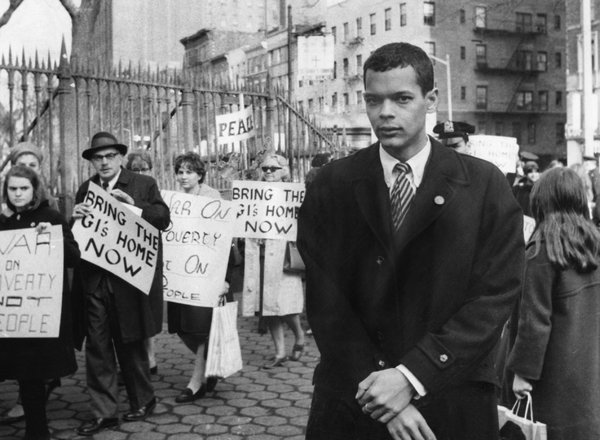 Mr. Bond in 1966, before making a speech in New York. Credit Associated Press

He was nominated, only somewhat seriously, as a candidate for vice president at the 1968 Democratic National Convention, where he was a co-chairman of a racially integrated challenge delegation from Georgia. He declined to pursue a serious candidacy because he was too young to meet the constitutional age requirement, but from that moment on he was a national figure.

When he was elected to the Georgia House of Representatives in 1965, along with seven other black members, furious white members of the House refused to let him take his seat, accusing him of disloyalty. He was already well known because of the Student Nonviolent Coordinating Committee’s stand against the United States’ involvement in the Vietnam War.

That touched off a national drama that ended in 1966 when the Supreme Court, in a unanimous decision, ordered the State Assembly to seat him, saying it had denied him freedom of speech. 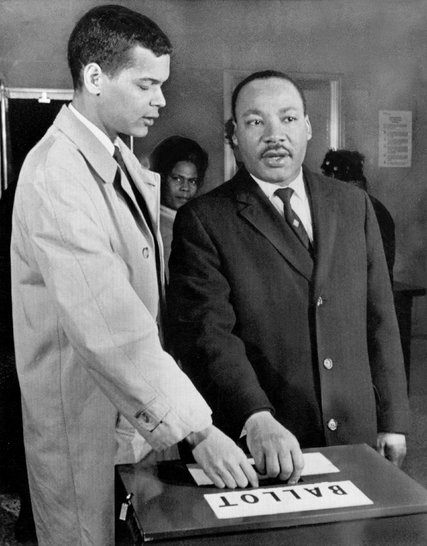 As a lawmaker, he sponsored bills to establish a sickle cell anemia testing program and to provide low-interest home loans to low-income Georgians. He also helped create a majority-black congressional district in Atlanta.

He left the State Senate in 1986 after six terms to run for a seat in the United States House. He lost a bitter contest to his old friend John Lewis, a fellow founder of the student committee and its longtime chairman. The two men, for all their earlier closeness in the civil rights movement, represented opposite poles of African-American life in the South: Mr. Lewis was the son of a sharecropper; Mr. Bond was the son of a college president.

On Sunday, Mr. Lewis posted on Twitter: “We went through a difficult period during our campaign for Congress in 1986, but many years ago we emerged even closer.” In another message, he wrote, “Julian Bond’s leadership and his spirit will be deeply missed.” 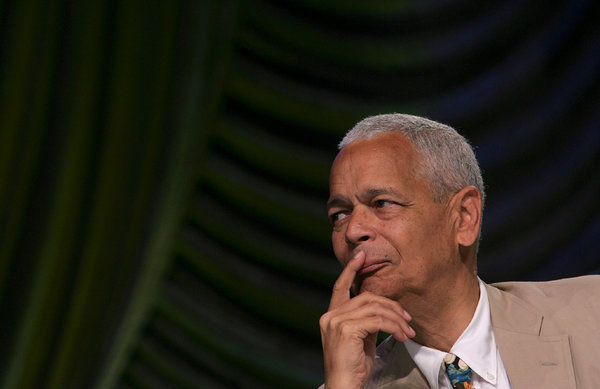 During the campaign, the United States attorney’s office began investigating Mr. Bond after allegations surfaced that he had used cocaine. Mr. Bond’s estranged wife, Alice, was said to have told the police confidentially that he was a habitual cocaine abuser. She retracted her accusations after Mayor Andrew Young of Atlanta, a friend of the family, telephoned her, leading to speculation that improper political pressure had been applied. She later refused to testify before a grand jury, and neither Mr. Bond nor Mr. Young was indicted.

Julian Bond’s great-grandmother Jane Bond was the slave mistress of a Kentucky farmer. Julian’s grandfather James Bond, one of Jane Bond’s sons, was educated at Berea and Oberlin Colleges and became a clergyman. His son Horace Mann Bond expected his own son Julian to follow in his footsteps as an educator, but the young man was attracted instead to journalism and political activism. 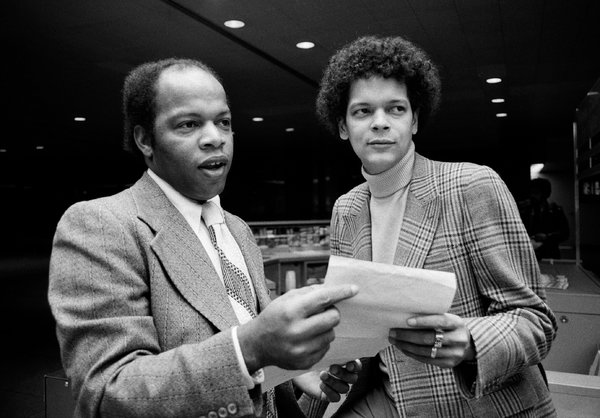 At age 12, Julian was sent to the private Quaker-run George School near Philadelphia. It was there that he first encountered racial resentment when he began dating a white girl, incurring the disapproval of white students and the school authorities.

He moved back south at age 17 when his father became dean of education at Atlanta University. At Morehouse College, he plunged into extracurricular activities but paid less attention to his studies. The civil rights movement provided a good excuse to drop out of college in 1961. He returned in the early 1970s to complete his English degree.

Dozens of his friends went to jail during his time with Student Nonviolent Coordinating Committee, but he was arrested only once. In 1960, after word of student sit-ins at lunch counters in Greensboro, N.C., spread across the South, Mr. Bond and a few of his friends at Morehouse organized protests against segregated public facilities in Atlanta. He was arrested when he led a sit-in at the City Hall cafeteria. 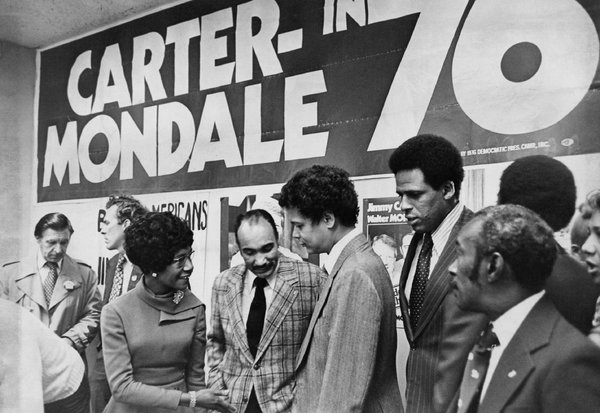 During this period, he and some fellow black students had an early experience with racism in the Georgia House of Representatives. They visited there one day and sat in the whites-only visitors’ section. The Capitol police escorted them out.

Mr. Bond devoted most of the 1960s to the protest movement and activist politics, including campaigns to register black voters. Both he and Mr. Lewis left the student committee after its leadership was taken over by black power advocates who forced whites out of the organization.

He prospered on the lecture circuit the rest of his life. He became a regular commentator in print and on television, including as host of “America’s Black Forum,” then the oldest black-owned television program in syndication. His most unusual television appearance was in April 1977, when he hosted an episode of “Saturday Night Live.”

In later years, he taught at Harvard, Williams, Drexel and the University of Pennsylvania. He was a distinguished scholar in residence at American University in Washington and a professor of history at the University of Virginia, where he was co-director of the oral history project Explorations in Black Leadership.

Mr. Bond published a book of essays titled “A Time to Speak, a Time to Act” in 1972. He wrote poetry, much of it reflecting the pained point of view of a repressed minority, and articles for publications as varied as The Nation, Negro Digest and Playboy.

He was made chairman of the N.A.A.C.P. in 1998. He remained active in Democratic Party politics and was a strong critic of the administration of President George W. Bush.

In addition to Ms. Horowitz, his second wife and a former lawyer for the Southern Poverty Law Center, he is survived by three sons, Horace Mann Bond II, Jeffrey and Michael; two daughters, Phyllis Jane Bond McMillan and Julia Louise Bond; a sister, Jane; a brother, James; and eight grandchildren.

In a statement on Sunday, President Obama called Mr. Bond “a hero and, I’m privileged to say, a friend.”

“Justice and equality was the mission that spanned his life,” Mr. Obama said. “Julian Bond helped change this country for the better. And what better way to be remembered than that.”