Amnesty International’s Sex Trade Decision: Not in Our Name

On August 11th, delegates at the 2015 International Council Meeting of Amnesty International voted to back the decriminalization of the sex industry, one of the more controversial decisions in its 54 years history. But, Amnesty's policy goes far beyond decriminalizing the women but also decriminalizes the perpetrators, says Janice G. Raymond the former co-director of the Coalition Against Trafficking in Women (CATW), explaining her opposition to Amnesty’s decision. 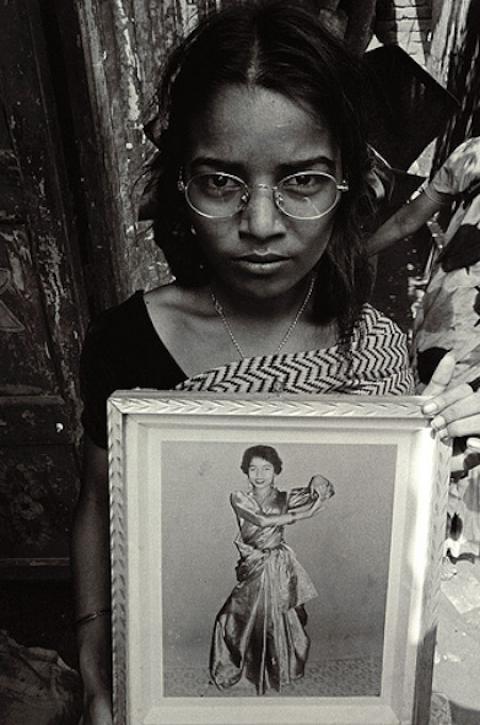 Bangladesh: A sixteen year old girl holds a photo of her self before she was trafficked into prostitution.,Nick Rain

The big word in Amnesty's defense of voting to decriminalize the sex industry is protection.  All was done to protect the women in prostitution. We were told that the right to buy sex and the right to pimp are measures necessary to protect women in prostitution. In the lead up to the vote, the organization was offended by those who pointed out that its alleged objective of protecting women is a protection racket for pimps and prostitution users.

Amnesty's policy goes far beyond decriminalizing the women but also decriminalizes the perpetrators -- the men who procure women and those who buy them for sexual gratification by contributing the funds that keep sexual slavery alive and well.

What poses as Amnesty's masquerade of protection for women in prostitution?

An alleged poverty program for poor women. It was Ken Roth, the director of Human Rights Watch, tweeting his support for Amnesty's proposal to decriminalize the sex industry, who gave this game away in saying: "Why deny poor women the option of voluntary sex work?" Ken joined the chorus of johns who spout a welfare narrative to justify their sexual exploitation by turning it into a virtue. He echoed the American prostitution user interviewed in the Philippines: "These girls gotta eat, don't they? I'm putting bread on their plate. I'm making a contribution."

A policy initiated by the perpetrators who are beneficiaries.  As Julie Bindel first revealed, Amnesty took to heart the lobbying of Douglas Fox, co-founder of a UK escort agency who claimed credit for Amnesty's draft policy advocating full decriminalization of the sex industry. In 2008 as a member of Amnesty, Fox urged the organization not only to support "sex workers" by promoting full decriminalization but also pushed his associates in the sex industry to join the organization and lobby from inside. "Getting Amnesty on side will be a huge boost to our morale... we need to pursue them mercilessly and get them on side," he said. Amnesty tried to distance itself from Fox by arguing he was not a current member and had no input into the policy, but his fingerprints and those he represents were all over it.

There are two voices that claim the authority of experience. One voice - survivors of prostitution and their allies - maintain that prostitution is violence against women. It asserts that defending the rights of women in prostitution requires prosecuting their perpetrators including pimps and prostitution users, and decriminalizing the victims. This means providing women in prostitution not simply with safe-sex education but also with life alternatives.

The other voice - sex workers - is louder, commands more media presence, makes prostitution look sexy, and seems to enjoy more financial support. Those speaking as "sex workers" argue that protecting women means that women should be free to hire "managers," otherwise known as pimps, and that "clients," otherwise known as johns, buyers or prostitution users, should be protected from any legislation such as the Nordic model that makes them accountable for their use and abuse of prostituted women.

The misbegotten Amnesty policy, as voted on August 11, 2015, may protect sex workers and their allies, a relatively privileged minority of women and some men who seem to shill for the sex industry on websites and social media. However, it doesn't protect the millions of women made vulnerable and marginalized by class, financial disadvantage, race, homelessness, war and conflict, and past sexual abuse who are caught in systems of prostitution and for whom there are few exits.

A policy that creates the impression that pimps and prostitution users are not only deprived of their rights but are also protectors of the human rights of women.

Throughout this year, Amnesty could hardly bring itself to utter the word "pimp" or "prostitution user."  It was as if by avoiding these terms, Amnesty could magically transform these perpetrators overnight into legitimate managers, cordial clients and agents of all good things for women in prostitution. Rather than simply defending the women and their right to be free from being criminalized for their own exploitation, Amnesty defended the rights of their exploiters as being necessary to women's freedom.

When one of the world's most respected human rights groups maintains that punishing prostitution users "may amount to a violation of the right to privacy and undermine the rights to free expression and health," something is seriously wrong with their view of human rights. Siding with the view that penalizing the buyers drives prostitution underground, Amnesty claimed that women would be made to take bigger risks. What is underground? Indoor prostitution, the Internet?  There is no evidence for this claim.

There is also a blatant contradiction in the claim that punishing the buyers drives women underground into more dangerous locations.  When the same advocates promote decriminalizing the sex industry, they argue that indoor venues are safer than on-street locations. When their aim is to discredit laws penalizing the buyers, they allege that indoor venues are more dangerous because they are more underground. Critics cannot have it both ways.

It's the prostitution industry, not any law penalizing the buyers, which forces women to take bigger risks. Buyers are a major part of that risk. Women in prostitution everywhere have to make choices, even endangering their lives when buyers are violent, controlling, and insist on no condoms or risky sexual practices.

A protection policy and a vote based on secrecy and closed doors. Amnesty allegedly promotes an open society free from authoritarianism and based on transparency. From the get-go, however, those other than approved Amnesty members were not privy to the actual policy or its various incarnations. Few outside the inner circle even knew what the final document contained and what specifically the delegates were voting for or against. And only Amnesty representatives know the contours of the internal debate, what country delegations voted yes or no, and what the actual vote count was. Amnesty has conducted itself as a closed society and with a secret ballot.

Amnesty ignored the diversity of opponents to its proposed policy of decriminalizing the sex industry. For example, when the Coalition Against Trafficking in Women (CATW) launched their petition on Change.org, social media was filled with attacks on the "privileged celebrities" who "know nothing about prostitution," as if they were the only opponents of the policy. The attacks disregarded the multiple signers representing international NGOs, anti-trafficking organizations, politicians, journalists, lawyers, service providers, women's crisis centers, policy makers, social workers, psychologists, women's rights activists and survivors. Amnesty discounted the petition of hundreds of academics and researchers who have worked for years on policies and projects related to prostitution and trafficking in women. The organization also snubbed former President Jimmy Carter's own petition on Change.org, and his name was seldom mentioned on social media as an opponent of Amnesty' s policy. And the survivors petition was made invisible.

[Janice G. Raymond is the former co-director of the Coalition Against Trafficking in Women (CATW), and the author of many books and articles, including her most recent book, Not a Choice, Not a Job: Exposing the Myths about Prostitution and the Global Sex Trade. Portside thanks Janice Raymond for sending us this article.]