California's Worst Law - And What's Behind the Repeal Movement

This year, State Senator Holly Mitchell, (D-Los Angeles), introduced Senate Bill 23, a repeal of the Maximum Family Grant rule, on the grounds that it has only driven poor women deeper into poverty, and done nothing to reduce the birth rate of women on welfare. That assertion has been supported by several studies, including one from the University of California, Berkeley and another from Cornell University. 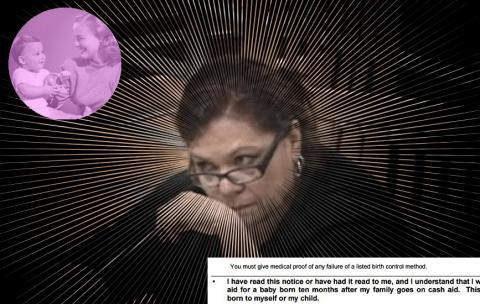 Vivian Thorp testifies at a Capitol hearing: “I believed in having a family.”,

Vivian Thorp was 28 years old when she ripped a ligament in her knee lifting heavy freight at Walmart in Vallejo, California. Until then, she’d liked her job and was good at it. “I was always strong and agile, and I had the skills for a physical job,” she says. “I helped set up that store.” But when the injury laid her up, she found herself adrift in the job market. “I wasn’t skilled for anything else other than waitressing or shipping and receiving,” she says. “I got really deeply depressed.”

Her life began to unravel. A bank repossessed the rental she was living in. The father of her baby daughter Jasmine, born in 1994, left Thorp and returned to England. In 1997, four years after the accident, Walmart finally paid her $20,000 for medical expenses and lost income, but more than half of it went to pay back workers’ compensation. In debt, homeless and with a small child to support, in 1999 Thorp sought the help of California’s welfare program, CalWORKs.

She didn’t stay on welfare long; after only about a year she found a job as an office manager with a security company. But she was pregnant with her second child, conceived in a relationship with a homeless man who struggled with alcoholism and mental illness. “It wasn’t a planned pregnancy,” she says, “but it was a blessing.”  Within six months, however, the owner of the security firm died, and all his employees lost their jobs. One month before she gave birth, Thorp went back on welfare: $520 a month for herself and Jasmine.

Thorp had assumed that when her second daughter, Janina, was born, her monthly cash aid payments would rise by another $122 to cover the child. This small sum might have qualified her for subsidized housing— even “Section 8 OK” apartments have income requirements. It also would have paid for diapers and a few extra groceries when food stamps ran out. She was “devastatingly shocked,” then, to learn of California’s Maximum Family Grant rule, which states that women who have babies while already on welfare may not be entitled to an increase in benefits.

“I didn’t understand it,” Thorp says. “I was trying to do all the right things.” With no help from the baby’s father, and an income so meager even subsidized housing refused to rent to her, Thorp moved her family into an abandoned building in Oakland.

“It was filthy, the bathroom was outside, and there was lead paint peeling off the walls,” she remembers. She resorted to stealing diapers and food. “Those were dark, dark days.”

California’s Maximum Family Grant law is an example of “family cap” welfare restrictions, a relic of a 1990s-era conservative belief that women were deliberately having more babies just to rake in more benefits, anointing themselves “welfare queens.” California Republican Party chairman Jim Brulte, then his party’s Assembly leader, pushed such a law through the legislature in 1994, when states still needed waivers from the federal government to impose these restrictions. Two years later, with the federal welfare program’s overhaul, states were relieved of the waiver requirement. Similar laws remain on the books in 15 states.

This year, State Senator Holly Mitchell, (D-Los Angeles), introduced Senate Bill 23, a repeal of the Maximum Family Grant rule, on the grounds that it has only driven poor women deeper into poverty, and done nothing to reduce the birth rate of women on welfare. That assertion has been supported by several studies, including one from the University of California, Berkeley and another from Cornell University. Such caps can, at least theoretically, motivate a woman to have an abortion, which is why Minnesota Citizens Concerned for Life in 2013 formed a rare alliance with Democratic Farmer-Labor legislators to repeal that state’s decade-old family cap rule.  Anti-abortion and anti-reproductive rights groups in California, however, have been less magnanimous. With the exception of the bishops of the California Catholic Conference, none have stepped up to support Mitchell’s bill.

That’s not simply because the conservative members of  “right-to-life” groups in California shrink from joining forces with a liberal, Mitchell insists. “If I had a single inkling it was a Holly Mitchell issue with them, Holly Mitchell’s name would be off it in an instant,” she tells Capital & Main. “I’ve had Republican support on all kinds of issues.” Instead, the conservatives’ hang-up over repealing the Maximum Family Grant rule “is all about the price tag.” The Assembly Committee on Human Services estimates that providing aid to the 134,900 children currently excluded from CalWORKs due to the Maximum Family Grant rule — 13 percent of the all children in CalWORKs households — will cost between $188 million and $220 million. That’s a lot of money for certain Republican lawmakers, even if they oppose abortion. “The very same people who will stand on the floor of the Assembly and espouse their anti-choice rhetoric are the same people who don’t support minimum wage [increases],” Mitchell says. “I refuse to call them ‘pro-life.’ I am pro-life. I am pro-feeding, housing and educating children. That’s what I call pro-life.”

This is not the first year Mitchell has floated a repeal of the Maximum Family Grant law. Twice before, she has authored bills that failed. Jessica Bartholow, legislative advocate for the Western Center on Law and Poverty, remembers last year’s fight as especially heartbreaking.

“The hearing was on July 3, the 20th anniversary of the bill’s passing,” she remembers. “It was only going to be a half-day in the Senate because of the Fourth of July parades.” Bartholow had spent two years working on the law’s repeal and was emboldened by a successful effort to block a similar law’s passage in Pennsylvania. She knew Mitchell’s bill had bipartisan support, so when an off-the-floor appropriations hearing was called, she let herself get excited. “I had a little hope in my heart,” she says. “I thought, ‘Wouldn’t this be great if they surprise us on the anniversary?’”

But when she threw open the door of the committee room, she saw a familiar, disheartening sight.

“When you see business lobbyists with their feet on the table, you know they’re getting exactly what they want.” They were: The committee was about to offer a $420 million tax break to Boeing subcontractor Lockheed Martin as a way to sweeten Boeing’s federal bid to build next-generation bombers.

“Nobody asked how many jobs they’d create, or whether they’d be middle-class jobs,” says Bartholow. “They didn’t have to show studies, they didn’t have to bring in any analysis. I thought, ‘A single company gets $420 million, and a woman has to come in and prove she’s [been] raped to get $122 a month?’ It was one of my saddest days at the Capitol.”

Mitchell isn’t sure 2015 will be different. Though the Senate approved the repeal, it was removed from the budget deal Governor Jerry Brown signed in June. The bill goes before the Assembly Appropriations Committee on Wednesday, where Mitchell worries lawmakers will want a watered-down version — one that requires women prove they’ve used birth control, for instance. (“What other public benefit program requires that you divulge to someone other than your health-care provider or partner what sort of birth control you’re using?” she asks.) Nor will she exclude from the repeal coverage for children who have been already been denied benefits. “If we do that we do that, we leave 40,000 without benefits in Los Angeles County alone.”

But repeal is long overdue, she insists. “It’s an antiquated policy based on a flawed hypothesis,” she says, “this racist, classist, sexist notion of the ‘welfare queen.’ You can’t be a welfare queen on $400 a month. I’m embarrassed to see this policy continues to be in our code.”

As it turned out, Thorp was illegally denied cash aid for Janina. The exclusion doesn’t apply to babies whose mothers have gone without CalWORKs’ aid for two months or more during their pregnancies, and Thorp had worked full time for six months during her pregnancy. She spent two years fighting Janina’s exclusion with the help of the East Bay Community Law Center. By the time she won two years later, she was pregnant again.

“That time they just said, ‘You know the rules,’” Thorp remembers, even though she insisted she’d become pregnant while on birth control pills. Contraceptive failure is one of the exemptions from the family cap rule, along with rape (as long as a police report has been filed) and incest. But only certain kinds of birth control — an intrauterine device, Norplant or sterilization — qualify. Thorp raised her third daughter, Zosia, now 12, without any extra help from CalWORKs. She nevertheless managed to earn an undergraduate degree in public policy from the now-defunct New College of California, and works full time as an advocate for the Homeless Action Center in the Bay Area.

People might ask, and some do, why Thorp continued having children she couldn’t support. But this kind of question glosses over the deeply ingrained complexities of why women have children at all. Thorp chafes at the images of fundamentalist conservatives on television crowing about their large families. “If you’re a wealthy Christian family you can have 19 children, but if you’re a poor single mother, you’re not supposed to have two.

“I got pregnant in the first place because I believed in having a family,” says Thorp, who is Catholic and unwilling to have an abortion. “I had a lot of hope and happiness for us. But now when I look at pictures of parents enjoying their babies, I envy them. My years of raising my kids were fogged out with despair.”

Judith Lewis Mernit is a contributing editor at High Country News. Her writing has  appeared in Mother Jones, Sierra, the Los Angeles Times, Audubon Magazine and the Atlantic.