Sue Bradford Edwards, local Missouri journalist, and Dr. Duchess Harris, Professor of American Studies at Macalester College, new book, Black Lives Matter, is a comprehensive guidebook introducing without emotionally overwhelming 6-12th graders who are learning about the movement, and its inheritance, for the first time to antiblackness violence in U.S. law and society. Surprisingly, the text also resonates with lower-division university students. 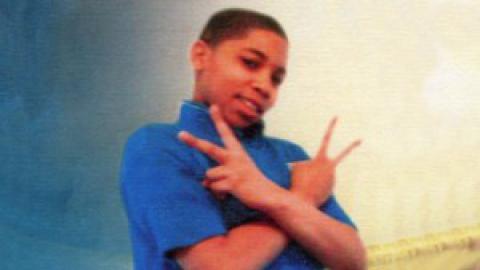 Although a four-hour wait is not unusual, crime scene experts believe a body should never be left in a public area for so long. People who saw Brown lying in the street for several hours felt the police were sending a message.

While parents of black children have no choice but to initiate a conversation with their kids about the precarity of black life, inducing psychic trauma as a means of teaching their children—at an early age, because Tamir Rice was no more than twelve years old when he was identified as a threat on a Cleveland, Ohio playground and shot dead by police officer Timothy Loehmann in less than one second—about how to protect their bodies from terminal injuries to the flesh, parents of nonblack children can and often do shield their kids from the knowledge of this violence, which is the inheritance of a national identity founded on the lynching of strange, black fruit.

The privilege of this choice is as damning to the black kids who might grow up to know and see, that is, experience themselves as Michael Brown (or Trayvon Martin, or Renisha McBride), as Ta-Nehisi Coates’ Between the World and Me, drafted as a letter to his fifteen-year-old son, testifies, as it is to white and nonblack children of color who might otherwise think critically about the way antiblackness works and their place in its political and libidinal economies.

But until now, no authoritative text designed to teach nonblack children about historical-structural inequalities productive of antiblack violence in U.S. law and society has been made available for commercial consumption. The first primer of its kind for ABDO Publishing Company’s “Special Reports” series, which provides adolescent readers with the background information and context to current events—its manuscripts range in topic from cybersecurity to the Ebola outbreak, to ISIS, to transgender rights—Edwards’ and Harris’ Black Lives Matter, available on Amazon.com for pre-order beginning November 1st, is unique to this effect.

Parents as well as teachers eager to teach middle and/or high school students about the routine vulnerability and terror generative of the rejoined, “Black Lives Matter,” will find an invaluable resource in this special report. The book is endorsed by Congressman Keith Ellison, who pens its introduction, as well as Gary Dennis Hines, songwriter for “Black Lives Matter: No Justice No Peace,” the single from Grammy Award-Winning vocal and instrumental ensemble, Sounds of Blackness.

Harris, a seasoned academic, was inspired to collaborate with Edwards, who regularly publishes children’s historical nonfiction, on this project after white parents inquired what she was telling her own children about the movement, which, as Ellison notes in the book’s introduction, “speaks to something beyond criminal justice reform,” in fact addressing, borrowing from Alicia Garza, the movement’s co-founder, “the ways in which Black people are deprived of basic human rights and dignity.”

Harris realized that they were asking for guidance.

While the book’s commitment to the presumed “facts,” affirming Edwards’ training as a journalist, arguably sanitizes this gratuitous violence, making the text palatable to its intended audience, its attention to historical-structural inequalities, demonstrative of Harris’ activism and scholarship, reminds readers that for as long as black people have been killed with impunity, which is to say, since time immemorial, blacks have resisted this violence—in the hold of the slave ship, on the plantation, in the prison, on the streets—to implore, their lives matter.

The book is instructive across a breadth of genres and audiences. Intended for 6-12th grade students, it is rich in images and side panels featuring relevant facts and figures, including legal judgments, as well as notable quotations from family members of the deceased, past and present government officials, a sociologist trained in criminology, and Patrisse Cullors, founder of the “Black Lives Matter” hashtag. Also featured are tangential references, like one in the second chapter about the Combahee River Collective, and another in Chapter Five about Rachel Jeantel and the gender norms constitutive of respectability politics in American courtrooms, making the book as deceptively interdisciplinary as it is intersectional.

Opening with a review of the events leading up to and following Brown’s death on August 9, 2014, which engendered the hashtag that birthed a movement, the book’s second chapter indirectly reframes this hashtag as a question—do black lives matter?—turning its attention to the original wound of chattel slavery, with sections also on World War II and the Civil Rights Movement. This historical sweep is evocative of Audre Lorde’s observation that black persons were in fact never meant to survive their enslavement, and later, their emancipation.

Crossing the space-time continuum, the third chapter, which outlines Oscar Grant’s death on New Year’s Day 2009, embeds a story about the Rodney King/Los Angeles riots of 1991. Similarly, Chapter Six, in which Edwards and Harris chart the increasing militarization of U.S. police forces over the span of five decades, centralizes the six-day1965 Watts Riots as a decisive moment in the training and armament of domestic troops, specifically, SWAT teams, which disproportionately target and incite violence in black communities.

Connections like these make the book especially relevant for college educators as well, who might use it as a resource in lower-division courses. In a special topics class I teach at the University of California at Irvine, this text has made it possible for students illiterate in antiblack violence to begin to extrapolate black experiences of historical-structural inequality—overdetermined by the experience of being made fungible—from non-black experiences of ethnic difference without being overwhelmed with academic jargon.

Chapter Four glosses the war on drugs and the prison-industrial complex, including the cradle-to-prison pipeline, while Chapters Five and Seven call attention to parasitic social and cultural scripts that embolden even (or especially) civilians to act with the authority and impunity of state troops, for example, in “neighborhood watch” organizations, detailing Trayvon Martin’s murder and Renisha McBride’s execution, specifically.

In their special report, Edwards and Harris help us to understand what’s the same and what’s different about this particular moment in black activism. As Darnell L. Moore notes in his retrospective for Mic,

Younger and older black people, with street and book smarts, donning sagging pants and pant suits, singing movement songs and rapping fiery political lyrics, marched on the streets of Ferguson last summer…because they had reached a collective breaking point. It didn't matter whether Brown had been guilty of theft or assault. Ferguson protesters knew Brown should not have been killed. Indeed, the Ferguson uprising was a significant departure from the sit-ins, marches and direct actions typically associated with the black liberation movement. Protesters did not need a perfect symbol, an innocent victim or an ostensibly respectable face upon which to base their calls for justice.

Edwards’ and Harris’ contribution is critical in the wake of the one-year anniversary of Ferguson protests, which has resulted in a second execution on the same streets once saturated with Michael Brown’s blood. The book ends with a short list of “essential facts,” including a timeline of events and a glossary of key terms, testifying to why black lives don’t in fact matter, and perhaps never will, despite the swift charges that are increasingly being sought against new offenders, like the six Baltimore police officers responsible for Freddie Gray’s murder on April 12, 2015.

This comprehensive guidebook is a one-stop reference, introducing without emotionally overwhelming 6-12th graders who are learning about the movement, and its inheritance, for the first time to antiblackness violence in U.S. law and society. Surprisingly, the text also resonates with lower-division university students.

Black Lives Matter is available for purchase beginning in January 2016.

M. Shadee Malaklou is a PhD Candidate at the University of California at Irvine, where she regularly teaches an introductory course on antiblackness for the Department of Gender and Sexuality Studies. Her dissertation repurposes Frantz Fanon’s Black Skin, White Masks to rethink the planetary alignment of race, sex and gender, using coded representations of Iranian sexualities as a case in point.  She is an assistant editor for the forthcoming special issue of Rhizomes, Cultural Studies in Emerging Knowledge, entitled, “Black Holes: Afropessimism, Blackness and the Discourses of Modernity,” forthcoming Winter 2015/Spring 2016.  She also writes regularly for Racialicious and publishes essays on her own blog, JFCB: Popular Culture, Critical Theory, and the Limits of a Liberal Humanist Discourse.