books Give Us the Ballot

The Voting Rights Act (VRA), passed by Congress in July, 1965 and signed into law by President Lyndon Johnson fifty years ago this month, has had a storied history. This basic achievement of the Civil Rights Movement has also seen conservatives, including long-time anti VRA campaigner and now U.S. Chief Justice John Roberts, fight it tooth and nail. Ari Berman tells this story, in a book Michael O'Donnell calls both a "depressing" and a "galvanizing" read. 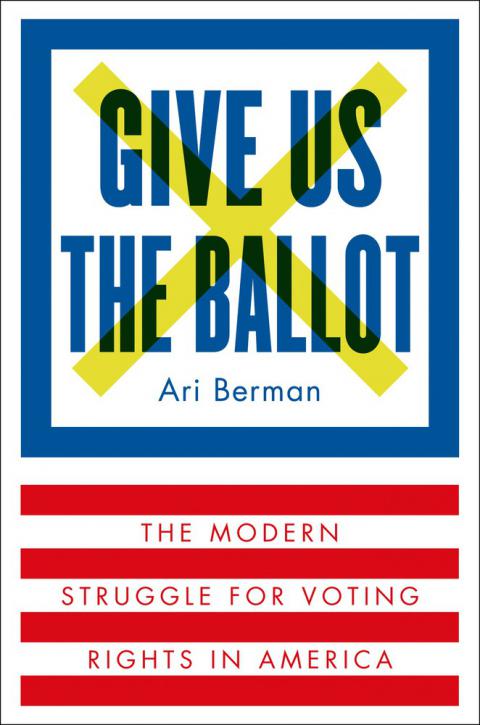 GIVE US THE BALLOT
The Modern Struggle for Voting Rights in America
Ari Berman
Farrar, Straus and Giroux
ISBN: 9780374158279

The dogs. The lunch counter. The “whites-only” sign. These enduring images of the civil rights movement are visceral symbols of separation and resistance. Yet they obscure a less tangible but more profound civil rights issue: the right to vote. President Lyndon Johnson viewed the franchise as the right on which all other rights depend: “the meat in the coconut.” Martin Luther King, Jr. agreed, describing voting as “the central front” in the struggle for black equality. As soon as Johnson had pushed the Civil Rights Act of 1964 through Congress, he set his sights on a voting bill. Images of police brutality against peaceful marchers in Selma, Alabama — the march itself was a voter registration effort — shocked the nation and facilitated the bill’s passage. Fifty years ago this week Johnson signed into law the Voting Rights Act (VRA), one of the landmark statutes of the twentieth century. Yet the right to vote remains precarious.

The journalist Ari Berman has just published Give Us the Ballot, an urgent, moving, deeply important history of the modern right to vote in the United States. The story has two bookends: the passage of the VRA in 1965 and the Supreme Court’s decision in Shelby County v. Holder in 2013 striking down a key section of the act. Berman has performed a great service by providing a clear, detailed history of an issue that has become overwhelmed by sound bites and demagogy. Modern assaults on the right to vote in the form of voter ID laws, Berman demonstrates, are nothing new. They follow a generations-old tradition that has systematically denied the franchise to African Americans since the days of slavery and Jim Crow.

Berman focuses less on the VRA’s passage than on its enforcement over the decades. The law’s immediate impact was to secure the registration of African-American voters, protected by federal monitors from the Department of Justice. During the first two months, 110,000 black voters signed up; within four years, that number had grown to a million. Yet African Americans no sooner registered to vote than southern legislatures devised new obstacles. As one observer put it, “Every time you objected to one [voting restriction], a more sophisticated response came in. It was a cat and mouse game.” For this reason, the VRA’s central provision became the requirement of “preclearance”: the Justice Department or a federal court had to approve any change to the voting rules of states with a history of poll taxes and literacy tests.

That didn’t stop states from trying. The catalogue of ingenious voting restrictions that followed is both fascinating and disturbing. Berman writes that from 1965 to 2013, the courts and the DOJ blocked more than 3,000 new voting laws, many of them in the South. Some states moved from district-based to at-large voting — a shift that allowed white majorities to dilute the political power of minority communities. When blacks began to exercise more influence at the polls, states split them up in gerrymandered districts so that no one district had enough votes to elect black candidates. Other methods ensured that polling places remained hostile to nonwhite voters. The future Supreme Court justice William Rehnquist challenged the credentials of Latinos as a poll watcher in Arizona. One segregationist in Mississippi even posed as a Justice Department official and intimidated black voters.

The federal government’s response varied by administration. Backsliding began under President Nixon, who reauthorized the VRA in 1970 but sought unsuccessfully to extend the preclearance requirement to all fifty states, weakening its focus on the worst offenders. The Reagan administration went further, siding with southern states rather than minority voters in court. An attorney named John Roberts, who had clerked for Rehnquist, was one of the administration’s most aggressive opponents of the VRA. But no administration frustrated voting rights more than George W. Bush’s. During its first five years the administration filed only one case alleging voting discrimination in the South — and that on behalf of white rather than black voters. The Bush administration also aggressively purged the DOJ’s Civil Rights Division, replacing career attorneys with political foot soldiers.

Roberts’s hostility to the VRA endured, and he wrote the Supreme Court’s Shelby County decision in 2013. By that time he was no longer a government attorney but chief justice of the United States. Reasoning that the VRA’s focus on the South no longer reflected contemporary reality, he and a conservative majority struck down the provision listing the covered southern states, effectively eliminating preclearance. North Carolina promptly enacted the most restrictive voter ID law in the country — even though the state recorded only two cases of voting fraud between 2000 and 2012, out of 21 million ballots cast. In addition to limiting the acceptable forms of voter identification, North Carolina’s law restricted early voting, eliminated same-day registration, encouraged monitors to challenge voters’ credentials, and even forbade counties from extending polling hours in the event of long lines. The Supreme Court refused to stay North Carolina’s law before the 2014 election. It also rejected an interim challenge to a similarly harsh Texas law.

If Give Us the Ballot is a depressing read, it is also a galvanizing one. The indomitable John Lewis, one of the book’s heroes, has been fighting voter suppression for fifty years; his resilience makes for several inspiring chapters. The book also serves as a slap in the face of complacency: we assume at our peril that the right to vote is a safely won historical guarantee. In fact it remains very much in question, its manipulation having become an ugly and deeply insensitive tool of modern political warfare. With the Supreme Court and many states unsympathetic to the hard-won right to vote, the best recourse, ironically, is the ballot box.

Michael O'Donnell is a lawyer who lives in Evanston, Illinois. His reviews and essays appear in The Nation, the Washington Monthly, and the Christian Science Monitor, among other publications.