August 26 is World Dog Day, a good time to reflect on the very reasonable possibility that dogs enabled modern humans to outcompete Neanderthals, and also on the fact that dogs are smarter, more empathetic and more devious than you knew. These days, both ordinary dogs and their ordinary humans can participate in Citizen Science, advancing our understanding of this oldest human coevolution. 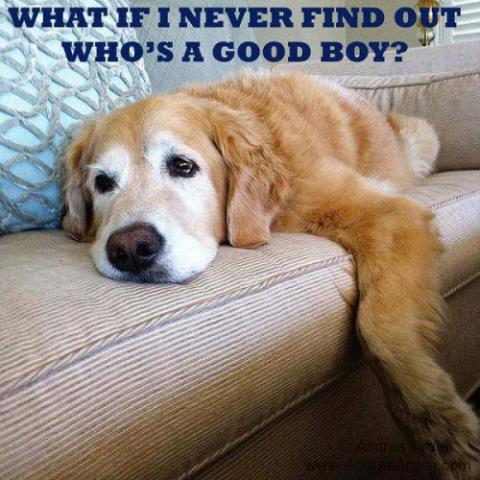 Thank you, Lassie for saving my life! And thank you Rover, Spot, Fido, Benji, and Snoopy. We can all shout this refrain, not just those pulled from a burning building or comforted by slobbery kisses. Dogs may have saved the entire human race. Not recently, but back when our species was just starting out on the journey to dominate the Earth.

Neanderthals were in Europe and Asia for two hundred thousand years, but began their demise as our people, Homo sapiens, expanded beyond Africa. Like Neanderthals, humans hunted, used tools, were pyrotechnic, and social enough to have cliques. Some researchers suspect that humans had one advantage that Neanderthals lacked: the precursor to (hu-)man’s best friend, the domesticated dog. Less wild than wolves, more wild than today’s collie, early humans likely survived an epoch of environmental change with the help of furry friends that were eventually domesticated as dogs.

That’s the argument made by Pat Shipman in her book, The Invaders: How Humans and Their Dogs Drove Neanderthals to Extinction. Shipman, a retired adjunct professor of anthropology at Pennsylvania State University, explores the evidence for a historic alliance between dogs and humans and what such an alliance enabled, including, for example, the hunting and transport of wooly mammoths.

Our longstanding relationship with dogs has led researchers in animal behavior and comparative psychology find our loyal companions (Canis familiaris) to be an excellent subject for studies of the mind. Some animal behaviorists prefer to study non-human primates because these are evolutionarily the closest relatives to our species. Even though we share more DNA with chimps, we’ve shared more of our social history with dogs. Now dogs solve social problems more similarly to human toddlers than many primates do. Their domestication process endowed them with skills to understand our verbal and body languages, and to read our emotional states which is something akin to empathy.

Children develop empathy after age four. Dogs don’t necessarily have the mental capacity to imagine walking their paws in a person’s shoes, but they have emotional contagion, like toddlers. Emotional contagion means they can respond to the emotions of others without fully understanding what the other is feeling. When dogs display sympathy and behave in comforting ways, it is in response to their owner being sad. When dogs are wary, their owner is giving off a vibe of distrust or fear. When a dog is humping, their owner is feeling…well, never mind, that behavior is an independent, normal part of a dog’s life.

Studies of dog cognition, behavior, and welfare have been making progress in laboratories for the last decade and are now poised to fetch new knowledge with giant leaps through citizen science.

In laboratories, research on dog cognition is modeled after research in developmental psychology of human infants. People are invited to bring their family dog into a research space where they are observed carrying out a variety of experimental tasks. Sometimes researchers visit dogs at their home or at doggy daycare centers, parks, or animal shelters to carry out observations. The traditional approach has one big limitation: small sample sizes. Most studies involve tests of a few dozen individuals. With citizen science, studies have the potential for enormous sample sizes by drawing from tens of millions of family dogs around the globe.

There are three basic designs of citizen science projects with dogs.

In one type, participants provide raw data, such as in the form of video-recordings, and researchers interpret and decipher the meaning. This was the approached used by scientist and Scientific American blogger Julie Hecht when she was a graduate student in the Horowitz Dog Cognition Lab. To pursue research questions about dog-human relationships, she leveraged the Internet to expand the laboratory setting into homes and backyards around the world. In a short-term (now over) citizen science project called Play with your Dog, she asked owners to record and upload videos of themselves at play with their dog.

In another type of dog citizen science, participants carry out experiments, interpret dog behavior, and provide researchers with the results. In the citizen science project Dognition, developed by Duke University Professor Brian Hare, owners play ten cognitive games with their dogs, following a strict protocol. The games are not tests that dog pass or fail, but instruments that measure the cognitive strategy each dog uses. Dognition games provide data on dog empathy, communication, memory, cunning, and reasoning. Based on a dog’s strategy in each game, it can be placed into one of nine Dognition Profiles.

Dogs are so good at reading our intentions, practically reading our mind, that you probably can’t deceive your dog. Your dog, however, has no qualms about being deceptive. According to early findings in Dognition, dogs most bonded to their owners are most likely to have intelligent disobedience, such as watching their owners closely enough to capitalize on a distracted moment to steal food.

This style of citizen science may be the trickiest of type to implement because owners can unconsciously cue their pets towards a particular decision. In Dognition, to ensure that participants are aware of the mistakes to avoid and sufficiently prepared for carrying out the experiments, they are required to watch training videos.

In the third model of dog citizen science, researchers provide content and participants assist in the steps necessary to interpret the meaning. For example, in the Canid Howl Project, participants listen to howls of grey wolves, red wolves, coyotes, dingos, and dogs and mark the howl spectrograms for further analyses. Marking spectrograms is a massive, time-consuming task, ideal for divvying up into kibbles and bits among online crowds. Also, if you have a recording of your dog’s howl, you upload that to the database for analysis too.

In The Genius of Dogs: How dogs are smarter than you think, by Brain Hare and Vanessa Woods, they suggest that natural selection favored those individual early dogs that were best able to figure out human intentions. Selection was not necessarily favoring the most intelligent dogs, but those with strong skills at social cognition. Through it all, dogs have been paying attention to us and now they are better at understanding us than we are at understanding them. No wonder we are the ones scooping up the poop. Maybe it was their master plan since the dawn of time.

August 26 is World Dog Day. To celebrate, the next #CitSciChat will be about citizen science involving companion dogs. I’m founder and moderator of #CitSciChat and, along with our sponsor, SciStarter, we invite you to join the conversation on Twitter this week at 2:00pm ET (7:00pm BST). If you are not a Twitter user, you can follow the Twitter feed on this page. In the Q&A format of the #CitSciChat, we’ll hear from the following guest panelists:

Caren is the assistant director of the Biodiversity Research Lab at the North Carolina Museum of Natural Sciences. She is an avian ecologist and relies on citizen science to help communities use birds as indicators of environmental health. She hosts monthly chat sessions about citizen science on Twitter. Follow her at @CoopSciScoop