labor Over 1,000 Arrested in Bengal Amid Violence During Trade Unions’ Countrywide Strike

Millions responded to a strike called by seven trade union centers in India. According to one union leader, "this is reflection of disenchantment of the working class. The government should learn its lessons from the strike. We are ready to discuss and reach a consensus. If the government does not take its lessons, the movement will be intensified. 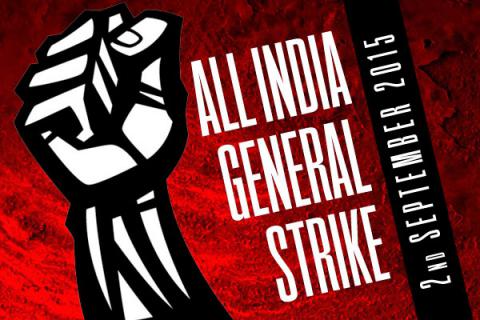 The first countrywide strike called by trade unions since the change of government last May turned into a show of strength with the Centre of Indian Trade Unions (CITU) claiming more than 15 crore workers in the organized sector struck work, and the Union labour ministry contending it wasn't the success it was being touted to be.

In a joint statement, 10 trade unions said the response to the strike call was "unprecedented" with "millions of workers" staying away from work. But, the government said it was positive on many of the workers' demands, pointing out of the 12 central trade unions, two did not participate, three remained neutral, and only seven unions actually struck work, indicating that the workers want to settle their demands through dialogue.

But, life on streets in several cities took substantial hit, with banking services, public transport and coal production taking most of the impact of the day-long strike called against the Centre's "anti-worker labour reforms". The impact was most visible in West Bengal, Tripura, Kerala, Karnataka, Puducherry and Odisha, while Delhi, Punjab, Haryana, Tamil Nadu, Goa, Gujarat, Bihar and Jharkhand were partially affected.

The Trinamool Congress, Congress, CPM and BJP workers clashed in West Bengal districts including Kolkata, Murshidabad, and Birbhum. By evening, more than 1,000 people were arrested after violence in the above districts. In Kerala, the strike was peaceful but total. Attendance in government offices was thin. Educational institutions, PSUs, banks and commercial establishments remained closed.

Life came to a virtual standstill in all the 13 districts of Andhra Pradesh. The agitation was peaceful except for lathicharge at Pydibhimavaram in Srikakulam district to disperse workers who prevented officials of a private pharma unit from attending to duties.

The primary impact was on public transport with employees of the Telangana transport corporation staying away from work. Coal production at run Singareni Collieries Company Ltd fell with miners striking work in 18 of the PSU's mines.

Petroleum minister Dharmendra Pradhan said the strike wasn't successful but AITUC's Gurudas Dasgupta said, "The response was unexpectedly massive. It's a reflection of disenchantment of the working class. The government should learn its lessons from the strike. We are ready to discuss and reach a consensus. If the government does not take its lessons, the movement will be intensified."

The Congress accused the Centre of trying to change labour laws to give undue advantage to a few crony industrialists and expressed solidarity with labour unions.

"It seems just as the British wanted to benefit the East India Company at the expense of millions of labourers, the Modi government wants to benefit five-six crony businessmen friends of the government," said Congress spokesman Abhishek Manu Singhvi.

BJP-affiliate Bharatiya Mazdoor Sangh (BMS) and NFITU stayed away from the strike. A faction of INTUC led by Ashok Chaudhary also opposed the strike call, terming it political and dangerous for the country's economy.

The bandh had an impact all over Odisha and in Nagpur, the strike took a toll on the output at Western Coalfields Limited, a subsidiary of Coal India, and ordnance factories. As much as 65% of the mining operations came to a standstill apart from administrative units also closing down.

In Punjab and Haryana, buses remained off the roads. But no violence was reported from either state. In Rajasthan, bank, transport, water and electricity services were the worst affected by the strike.