No Union Mines Left in Kentucky 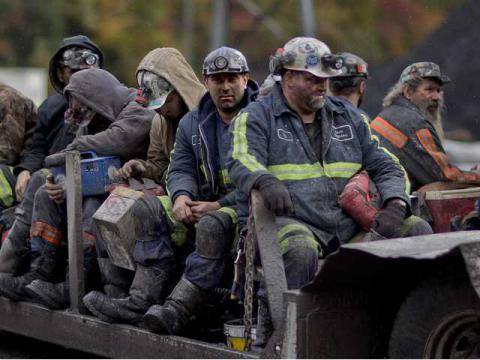 Their workplaces became war zones, and gun battles once punctuated union protests. In past decades, organizers have been beaten, stabbed and shot while seeking better pay and safer conditions deep underground.

But more recently the United Mine Workers in Kentucky have been in retreat, dwindling like the black seams of coal in the Appalachian mountains.

And now the last union mine in Kentucky has been shut down.

"A lot of people right now who don't know what the (union) stands for is getting good wages and benefits because of the sacrifice that we made," said Kenny Johnson, a retired union miner who was arrested during the Brookside strike in Harlan County in the 1970s. "Because when we went on those long strikes, it wasn't because we wanted to be out of work."

Hard-fought gains are taken for granted by younger workers who earn high wages now, leading the coal industry to argue that the union ultimately rendered itself obsolete. But union leaders and retirees counter that anti-union operators, tightening environmental regulations and a turbulent coal market hastened the union's demise in Kentucky.

The union era's death knell sounded in Kentucky on New Year's Eve, when Patriot Coal announced the closing of its Highland Mine. The underground mine in western Kentucky employed about 400 hourly workers represented by the United Mine Workers of America.

For the first time in about a century, in the state that was home to the gun battles of "Bloody Harlan," not a single working miner belongs to a union. That has left a bad taste in the mouths of retirees: men like Charles Dixon, who heard the sputter of machine gun fire and bullets piercing his trailer in Pike County during a long strike with the A.T. Massey Coal Company in 1984 and 1985.

"I had my house shot up during that strike," said Dixon, the United Mine Workers local president at the time. "I was just laying in bed and next thing you know you hear a big AR-15 unloading on it. Coal miners had it tough buddy, they sure have."

The shots fired at Dixon's home recall the even deadlier organizing battles of the 1920s and '30s, many inHarlan County.

One ambush shooting in 1937 ended with the death of union organizer Marshall Musick's 14-year-old son, Bennett, when "a shower of bullets tore through the walls of the house," according to union leader George Titler's book, "Hell in Harlan."

Organizing battles raged in Appalachia throughout the last century, most notably the 1921 Battle of Blair Mountain in West Virginia, where thousands of striking miners fought a shooting war with law enforcement and replacement workers, ending in dozens of deaths. One year earlier, 10 people had died in Matewan, West Virginia, in a skirmish over eviction notices served to miners who had joined the union.

In Harlan County, Kentucky, the 1931 Battle of Evarts ended in four deaths. More recently, the strife of the mid-1970s Brookside mining strike here was captured in the Academy Award-winning documentary, "Harlan County U.S.A."

Johnson, who appeared in the film when he was 22 years old, returned this summer to the scene of his first picket line arrest along state Highway 38 in Harlan County.

He had stood there, near the Highsplint mine entrance, with other union members and gasped as state troopers set up a machine gun across the street. After about four hours of noisy picketing, a tall trooper stuck a baton between Johnson's legs and raised it up to his groin.

"We just came to lend them a hand that day, and ended up going to jail," said Johnson, now 63 and battling health issues.

Johnson, Dixon and union leaders worry that the union's disappearance in Kentucky has opened the door for coal operators to lower worker standards.

Smith pointed to operations run by former Massey Energy chief Don Blankenship, who closed union mines in the 1980s and now faces criminal conspiracy charges in the 2010 deadly explosion at the Upper Big Branch mine in West Virginia that killed 29 workers.

But industry leaders argue that higher wages and safer mines in recent decades have reduced the desire for workers at non-union mines to organize.

"Anymore, I just don't think there's that level of discontent between the company and working coal miners, which I think is a very good thing," said Bill Bissett, president of the Kentucky Coal Association, an industry group. "If anything, they've won, which I think they've worked themselves out of a job, in that respect."

Bissett said mines have become safer despite the union's diminished presence in Kentucky.

"We're in some of the safest time in the history of U.S. mining right now and a time when the UMWA is at their lowest level," he said.

More vigorous federal enforcement and the closing of older Appalachian mines in a turbulent coal market have also contributed to declining injuries and deaths.

Union membership remains substantial in West Virginia, with more than 30,000 members, largely because that state wasn't affected by the environmental regulations on high-sulfur coal that essentially halted mining in western Kentucky in the 1990s. Smith said those western Kentucky mine shutdowns led to the loss of about 20,000 union members in two years.

Patriot Coal cited the slumping market when it told workers the Highland Mine had to close.

A safety officer at Highland for just a few months, Sizemore had left another coal job and his family behind in Harlan County, 300 miles away.

Union miners at the Highland mine were making about $24 an hour and working four 10-hour shifts a week. Workers at non-union mines typically work long shifts six days a week, and benefits vary from mine to mine. Sizemore, who was not in the union at Patriot, has since moved back to Harlan County to work for a smaller mining company. He took a hefty pay cut.

Wages were less of a priority than safety during the Brookside strike of the 1970s. Organizers were pushing the mine's owner, Eastover Coal Company, to sign a contract establishing a United Mine Workers local there.

Returning to the scene of his arrest four decades ago, Kenny Johnson looked past a small bridge that leads to a mining operation. Coal is still being mined there today, just not by union miners.

Johnson recalled the hard lessons he took from that clash.

"I realized that day that it was very serious and that people would fight you, even to the point of having you put in jail for standing up for some of the ideals that coal miners hold dear," he said.

As he spoke, a young, burly miner drove across the bridge, smudges of coal dust on his face. He angled his truck across, a few feet away from where Johnson was standing.

As he accelerated away, a cloud of dust kicked up behind him.